And Then There Were Four

"The one best place to bury a good dog
is in the heart of his master."
A small scrap of a dog, he paced nervously in front of the gate, his cagemate whining and pawing at the the metal fencing. He stood as tall as his long, thin legs could reach, sticking his little nose through the chain link and into my waiting palm. Surrendered by an abusive former owner, Chance was six years old and bonded to the chubby daushund mix, Baby, who waited anxiously for me to slip through the gate and into their cage. I slid to the floor and folded my legs around them both. Chance clambered over Baby's broad back as she licked my jeans, climbing up my chest like a goat. At twelve pounds, he looked like a chihuahua on stilts, his twig-like legs out of proportion to the rest of him. I stroked his ears, murmured platitudes, and then took them both home.
At six and eight, they were considered senior dogs and needed to be adopted together. Lucky to be placed at a no-kill shelter, their chances of being adopted were slim. Chance growled like a gremlin when excited, his trachea partially collapsed from being beaten. One dog soon became five but Chance had claimed me as his. Lying in the grass while I gardened, he would doze, waking at my slightest movement to watch me as I puttered. He slept against my chest when I read on the couch, small contented sighs sputtering to the surface as he slipped off to sleep.
He'd been listless all week, mopey and out of sorts. He needed his teeth cleaned and I worried about infection. His little belly was rounder than usual and I prayed silently as I headed for the vet. Tumors circled his organs, his liver bulbous with growth. His abdomen taut with fluid and blood, the vet diagnosed an aggressive liver cancer with no cure or treatment. The family gathered and we said our farewells with Baby at our side. She sniffed his paws and looked away. I'm spreading  his ashes in the garden, where he loved to pee on the plants and harass the squirrels, his tiny paws sidestepping the flowers as he zigzagged through the beds. Dog heaven, I am convinced, contains a garden, squirrels, large grasshoppers perfect for pouncing on, warm blankets, and lots of bacon. 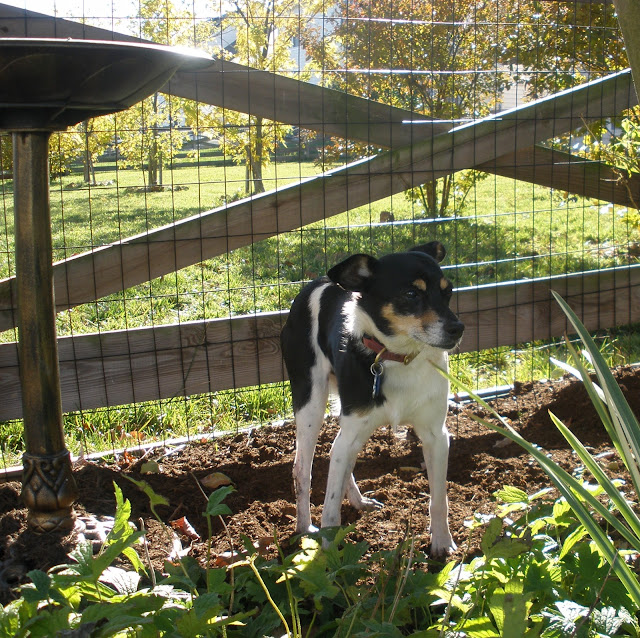 Chance was a rat terrier we adopted  five years ago.
Posted by Casa Mariposa