About two years ago I started keeping a garden journal. Filled with pictures I've cut from gardening magazines and catalogs, I scribble my plans for the coming months and remininsce about the successes and failures from the previous season. It's both heartbreaking and humorous to reread my rants - plants that died, plants that grew too much and took over the garden, empty skies devoid of rain for weeks on end...

I'm not much for resolutions. Instead of resolving to do someothing different in a coming year, my resolutions are spontaneous and are often the result of a three part thought process:

I've found this approach quite effective, especially when followed up with a note to myself posted on either my calendar or in my journal as a reminder of what NOT to do. But this year I've decided to post my end-of-year reflections here.

I finally broke down and bought a pair of Felco pruners this year. Tired of the junky pruners I had used for years, I bought a perfect pair of Felcos and guarded them closely. They lay perched atop a box of Kleenex on the counter near the back door, ready to prune at a moments notice. Until I lost them. Always the optimist, I consoled myself with the thought that when my garden went dormant, I'd find their red handles poking out from the dead foliage of some Felco-eating plant and all would be well in my world. It didn't happen and I angrily ordered a replacement pair. Thinking I had purchased the same style, I eagerly opened the box and lifted them from their wrappings. Instead of buying the small everyday pruners meant for flowers, I had selected a larger pair designed for cutting small branches. They fit awkwardly in my small, square hands but worked perfectly. I will NOT lose them!! 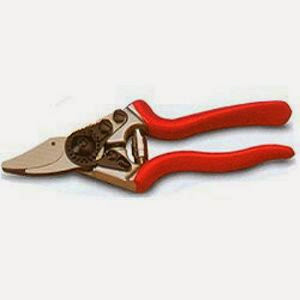 2. Don't lose your sunglasses in the asters again!

After spending the summer canoodling with the aster divarcatus, my sunglasses aren't the same. But at least I found them.

A hideous invasion of spider mites ravaged my potted plants this summer. I took a leaf to the US Botanical Gardens in DC for an accurate analysis, I blasted my plants with water, but did I actually move the orginal host plant away form the other plants?? Of course not! That would have been way too easy!!! Initiate three part thought process. Part One; Oy, that was stupid!....

5. I mulched the garden this fall.

I've never mulched my garden in the fall before. I always spent the winter pouring over catalogs and magazines, dreaming up new garden beds or mentally rearranging current plants. Come spring, boxes of plants would arrive and I would disappear into the garden, rushing home from work and my daughters soccer games to spend as much time outside as possible.

This past summer was hot and brutally dry. By the beginning of August, it became painfully apparent I had a massive amount of work ahead of me if I wanted to avoid the same problems (too much dry shade, overgrown shrubs/vines) I spent the summer fighting. By the middle of November, I had taken out two tiny trees, two shrubs, spent hours pruning and transplanting, and had lifted every plant from an 18 foot bed so I could raise the soil level and ammend the soil. With so much bare soil visible, I decided to mulch the entire garden to prevent the newly transplanted roots from heaving. I filled in any bare spots with bare root plants, selections from my favorite online nurseries, and super sale plants from local garden centers. The plants in the picture were ordered from Lazy S's Farm, an amazing online nursery in southern VA. I ordered ruellia 'White Form', purple toadflax, lots of coneflowers, and some veronica. Every thing arrived in perfect condition. Even after shipping, I paid less than I would have locally. Toadflax and perennial ruellia, a VA native, aren't available at the garden centers near my house.

Our winter has been incredibly cold and windy but when I look at garden, tucked quietly in for the winter with a blanket of leaves and mulch, a peaceful sense of satisfaction creeps through me. Initiate new thought process: Part One: Smile, that was smart!

In an average year, I grade over 12,000 assignments, the vast majority of which are graded at home. This figure doesn't include the Science Fair, of which I am the Grand Poohbah. At a minimum of 20 assignments per quarter (There are four qtrs in our year) x 150 students, I spend hours grading, grading, grading. I am required to post 18 grades per quarter, so changing these numbers isn't really an option.

However, I'm a big believer that spending time doing the things we love, makes us happier people. So one of my goals for this year is to spend more time discovering the amazing blogs on Blotanical. When the only garden we ever see is our own, it's easy to lose perspective. This summer as my stratospheric water bill inspired me to find creative ways to keep my garden moist, it was comforting to know I wasn't the only one struggling with scorching weather. So I've created a goal, but not a resolution, to discover one new blog a week. Here's to the future! Clink! Clink! 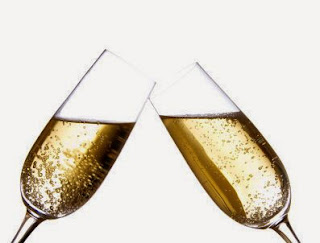 What are your resolutions and reflections?
Posted by Casa Mariposa 20 comments:

Merry Christmas from the dogs of Casa Mariposa

The only way to get all five of my dogs in a picture is to hire a professional photographer, photograph them asleep, or have my daughter (The blonde in the too big sweats) help me. Option one is pricey, option two is boring, but option three?? Well, here ya go!! I had to act quickly since my littlest dog, a rat terrier named Chance, was determined not to cooperate.

May everyone have a peaceful weekend, and if you celebrate Christmas, here's a big Merry Christmas to you all!
Posted by Casa Mariposa 8 comments:

Christmas has come early to Casa Mariposa. It didn't bring holly berries, hellebores, or carolers. Instead it brought an operating room, a skilled surgeon, and general anesthesia. As I write this I am wearing garden gnome pajama pants, my Save A Life Adopt A Pet sweatshirt and a giant bandage down my right leg. A pair of crutches stands at the ready. 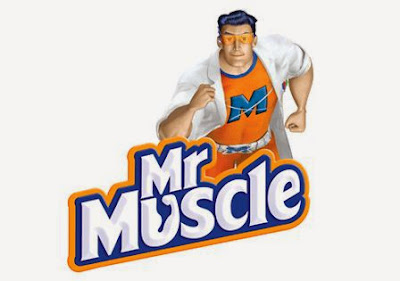 Bending my right knee without yelling out words that rhyme with holy ship! or fire truck! had become virtually impossible. I decided this summer that I had several options to consider: hiring a large, muscular man to pick me up every time I bent down and, inevitably, couldn't get up again without cussing or crying, replacing the Yoshino cherry tree in the yard with a crane, strapping myself into a harness, and gardening from aloft so that I never had to bend much of anything, or going to the doctor. I choose option three, although option one was mighty tempting....
For twenty odd years I had been given the highly scientific, medically precise diagnosis of "bad knees". When I mentioned this my doctor, as well as the official names of the knee problems that plagued me as a kid, he shook his head and asked if I'd like a real diagnosis. Yes, please! Patella tilt, is what it's called. Hurts like hell, is how it feels.
I mentioned to the doctor that I really needed to have the surgry during the winter. I explained I needed time to recover during my off-season. My off-season? Was I an athlete? Despite being proud of my ability to run in heels, my shoe of choice next to my yellow 15 year old Birkenstock gardening clogs, no, sir I was not an athlete in the conventional sense. I looked him square in the eye and explained gently, "I'm an extreme gardener. I need to be completley recovered by spring." He looked at me, paused , and laughed. Undaunted, I forged ahead. "My garden is an organic, certified wildlife habitat that I landscaped myself. I'm not talking about about a few pots full of pansies." He smiled, I scheduled, and the surgery went well.
Tonight I'm hoping to dream about my garden, a quiet dream filled with bird song and no shouts of Holy ship! My knee hurts! Only time will tell....
Posted by Casa Mariposa 23 comments: