The University of Don't Do That Again! Lesson One

As a teacher, it may seem that I'm the one who teaches while others learn. However, that is rarely the case. Every day, my students, family, dogs and garden teach me something I either didn't know before or had learned and promptly forgotten. Despite being a science teacher, I am especially skilled at forgetting the basic laws of science as they apply to my garden. This was made absurdly and painfully obvious this summer.

Lesson #1 -  Gravity Does Not Exist
Summer rain in northern Virginia comes in two forms: too much or not at all. Intense thunderstorms occasionally roll in, unleashing torrents of rain that flood streets and basements but run off the slightly sloped areas of my garden, leaving the mulch wet, but not much else. Summer storms are offset by periods of drought that inflate my water bill and turn my garden into a botanical ICU. Despite planting as many drought resistant natives as possible, after a month of high temps and no rain, even the locals are thirsty. To solve this problem, I laid soaker hoses. Incorrectly.

My son works at our local garden center, a job that allowed me, since I feed, clothe, and shelter him, to enjoy a whopping discount. A discount at a garden center is to me what a designer purse is to others. I whooped and hollered for joy, drooled over my savings, and planned my purchases with glee. And then I got to watch him load it all into my car. Ahhh...satisfaction!

By the time he was hired and I had bought miles of soaker hoses, my garden had already woken, its beds filling with clumps of perennials. It wasn't the best time to lay the hoses, but I was undeterred. I was determined to solve the problem of soil robbed of moisture by giant, thirsty trees and unpredictable rainfall. Armed with turf staples, a wheelbarrow full of hoses, and an iron will, I headed toward the back yard. Several weekends later, black hoses snaked through the garden, a serpentine system of moisture delivery guaranteed to conquer drought and dryness. Layers of mulch covered the hoses and the garden grew around them, covering its secret. I smiled to myself and smugly surveyed my domain. "Drought and dryness, cower at my feet!", I thought to myself. "I have soaker hoses!"

Fast forward to the middle of July - hot hot hot and dry dry dry. With the rain barrels empty and dry weather in the forecast, I skipped over to the garden hose and eagerly hooked it up the soaker hoses. I turned the spigot to full blast and smiled, anticipating the relief my wilting, weary garden would soon enjoy. The hoses under my river birch  and near the trumpet creeper sputtered to life but the rest of the garden remained strangely parched. No water. Nothing. Not even a drip. Shocked and frustrated, I dug at the mulch and checked the hoses. Finally, I could take it no longer. "Drip, damnit! Drip!!" I yelled. It didn't work. I threw down my garden gloves and stomped off. Later that evening, I wandered the yard and scanned my garden detemined to figure out where I had gone wrong. Hunched next to the blue mist flowers, my daughter began yelling across the yard, "Mom, these are all kinked up!" "Where does this hose end?" In my eagerness to corral my rapidly expanding garden, I had morphed the sinuous curves of the hoses into sharp corners and angles. Too many hoses had been connected, creating an transgarden super highway that went nowhere and accomplished nothing. I stood back in disbelief. My eyes wandered to the end of the soaker hose, it's origin marked by a cute hose guide. It lay at the front of the bed, snaked through several low spots and then back up again. Speechless, I just stopped and stared. In my haste, I had expected water to flow uphill, around right angles, and with enough force to pulse through 200 feet of hose. 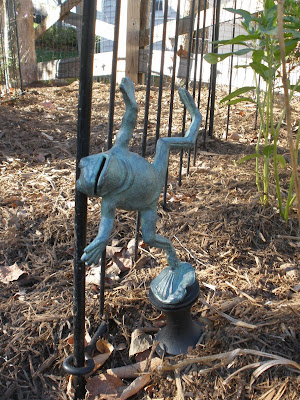 I used dancing frog hose guides to remind me of where I put the beginning of the soaker hoses. I also used hose guides with a decorative ball on top.


As a student of the University of Don't Do That Again! I will never graduate and have no idea what degree I'm working towards. I am forever the student, a proud bearer of a Certificate of Perpetual Enrollment. Weeks spent laying soaker hoses this spring has culminated in weeks spent digging them up and relaying them correctly this fall. This time I'm not smug or victorious, just cautiously hopeful.
Posted by Casa Mariposa 14 comments:

Monday through Friday I tend a garden completely different than the one that surrounds my house. I spend the day with 150 sixth graders exploring the weird and often wacky world of science. None of my students are weeds; they are all roses, some just a bit thornier than others. They arrive in September excited to be in middle school but with minds already dulled by five years of worksheets. And then we race gerbils and measure the distances covered using meters, not feet, we chew chew gum to see how much mass is lost, and shake our butts to dance music for three minutes when we've been sitting too long. Hopefully, every day my garden will bloom and grow, roots shooting deep into mushy brain cells. They pepper me with questions, their filterless thoughts erupting from their mouths like cognitive popcorn. On Wednesday, I climbed to my favorite platform, giving a quick sermon on the importance of independent thinking as opposed to filling in blanks or bubbles. A student in my public, separation-of-church-and-state school yelled, "Amen!" and I giggled.

Tomorrow is my annual Play with Fire Day. To teach the concepts of density in the atmosphere, I light a piece of paper on fire, slip it into a milk bottle, plop an egg on top, and watch it forced into the bottle by the change in air pressure. I didn't create this demonstration but wish I had. My students watch in rapt silence. I always wear short sleeves and joke about how I hope I don't set myself on fire this year. I station a kid next to the fire extinguisher and ask him/her seriously if they know how to use it. The entire demo only takes a few minutes and after the egg sinks into the bottle with a smelly, smoky plop, the class erupts in cheers and the students yell, "Do it again!" Just an egg, a match, some paper, and a milk bottle. The roses burst into bloom and grow taller and stronger. Am I a teacher? No, just a gardener.
Posted by Casa Mariposa 16 comments:

Downward Dogwood aka The Borer War

In the garden outside my kitchen stands a Rutgers hybrid Stellar Pink dogwood. Tall and beautiful, it is resistant to dogwood anthracose, powdery mildew, and borers. At least that's what the tag said... In reality, its flowers are very pale pink instead of dark pink, it's trunk is peeling, and half the tree has tiny leaves while the other half has normal sized leaves. 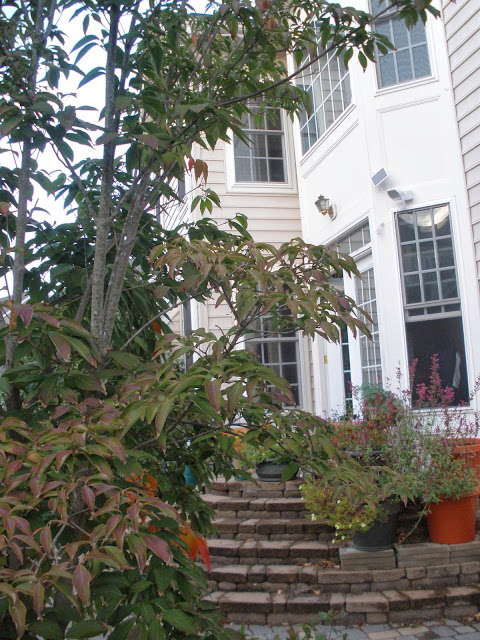 My, what tiny leaves you have! 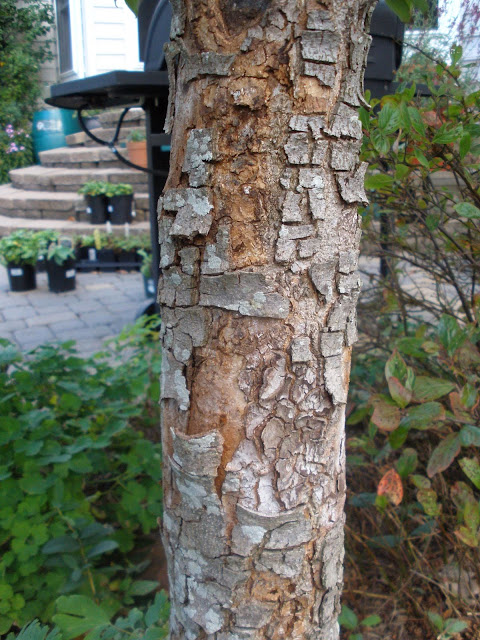 All summer I stewed about the dogwood. The trunk shouldn't be so weird looking, I thought.   Having convinced myself the tree was being suffocated by a girdled root, I weighed my options, and decided to call an arborist. I'm embarassed to admit how little I know about trees: they are usually big, usually green, and don't like being drowned in mulch or whacked by lawn mowers. But I did know that every time I passed the dogwood, regardless of the direction I took, I ran into the same thought, that something was wrong and I was not the person to make an accurate diagnosis.
According to the perky arborist, who called my trees by personal pronouns and petted all five of my dogs, my dogwood has a problem with dogwood borers. Apparently, it hadn't read its tag. It also has a tree wound of myserious origins. After completing a root collar excavation and soil tests, it was determined that the tree didn't have a girdled root, or any strange diseases, and that other than being full of borers, the reason for half the tree being covered in tiny leaves was unknown. 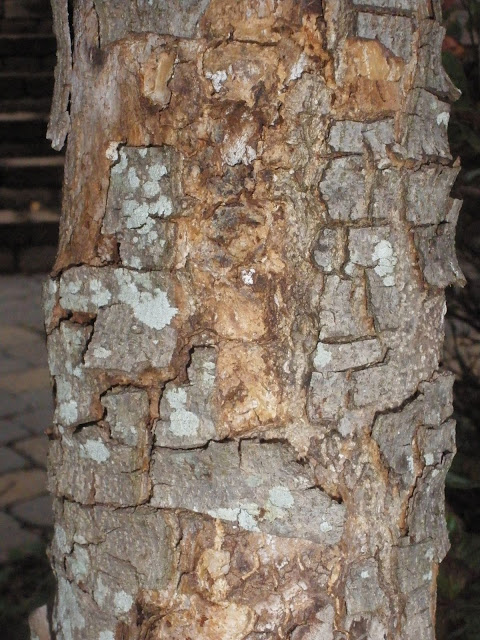 Dogwood borers are insidious little creatures that bore tunnels into the trunks and damage the vascular system. 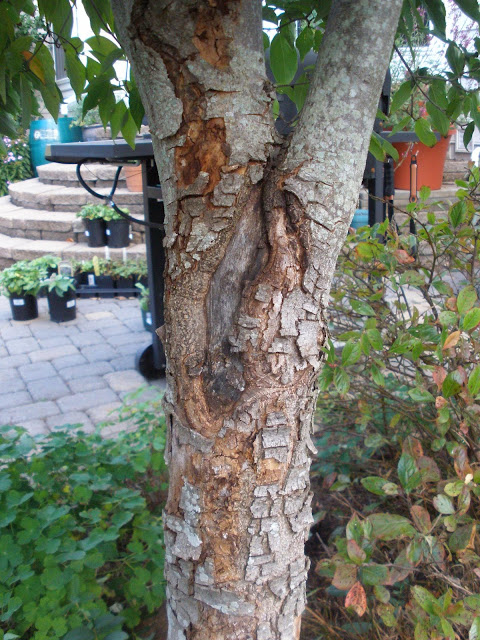 The war has started and it's me against the borers. I have only one weapon, a pesticide deep within the realms of the Dark Side. My favorite garden center smartie advised me to paint it on the trunk, which prevents it from contaminating the other plants or running into the soil. I hope it works.
Posted by Casa Mariposa 11 comments: