The weather is cool, the leaves are falling, and it's time to say goodnight to my garden.
2015 was a good year but I'm ready for a break. 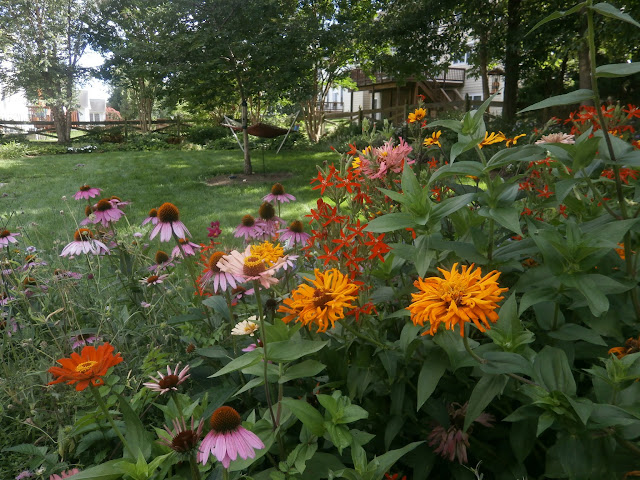 'Peggy's Delight' zinnias with silene 'Prairie Fire', pink coneflowers, and helianthus brought in on the wind.


The basil was weird but the zinnias were beautiful. 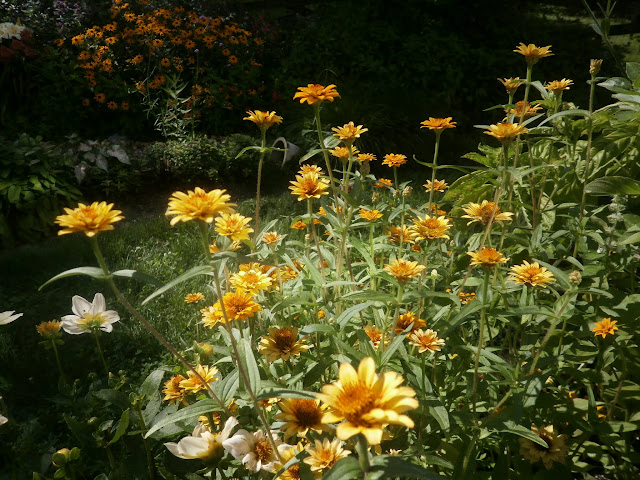 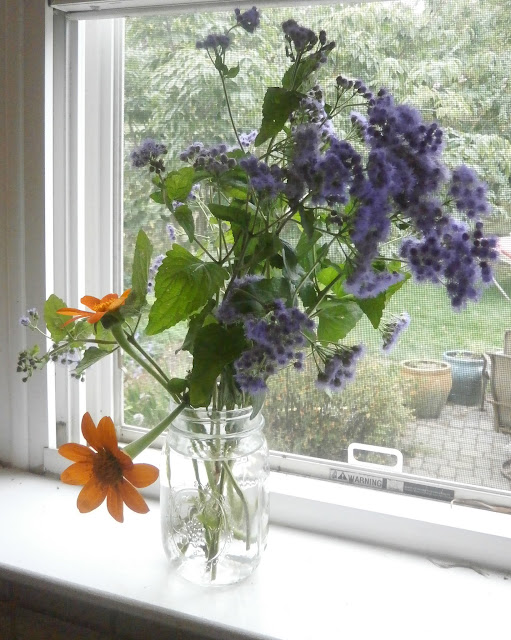 
The closest I ever came to the meme In a Vase on Monday was
Stuffed in a Jar on Friday. 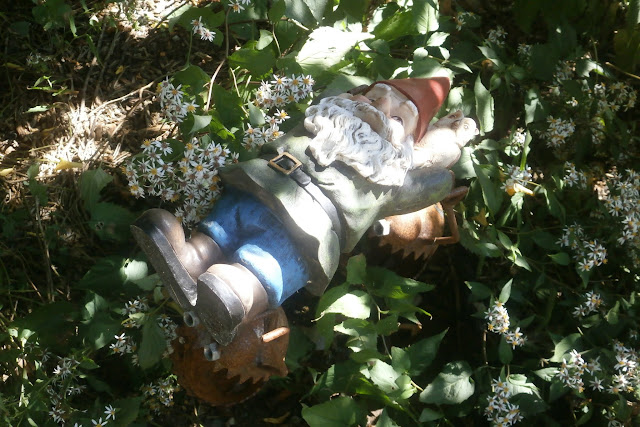 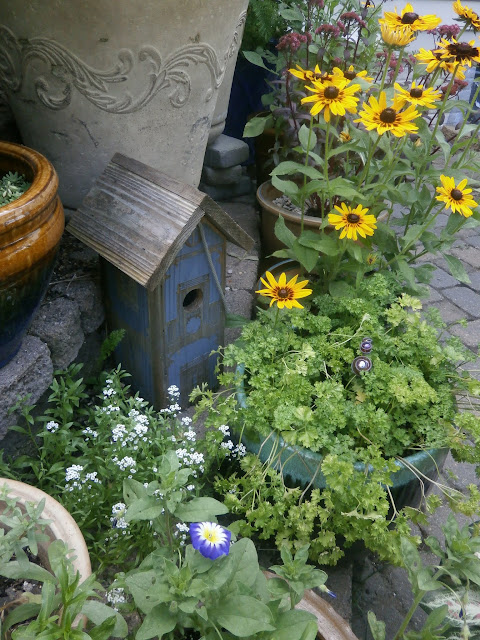 White alyssum grows next to the birdhouse. I loved this surprise so much I've already scattered more alyssum seeds around my patio steps.

and alyssum seeds I thought had been overheated and died were ignored by the birds when I threw them out as bird seed and grew along my patio steps instead. 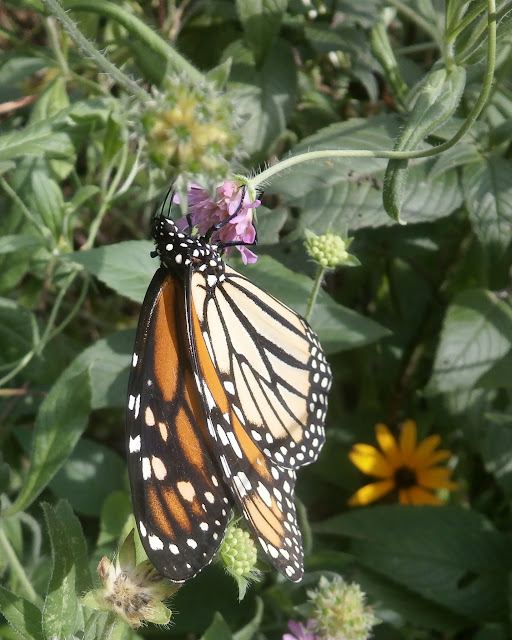 Monarch on a knautia bloom.

Monarchs flew in and I had a few caterpillars. 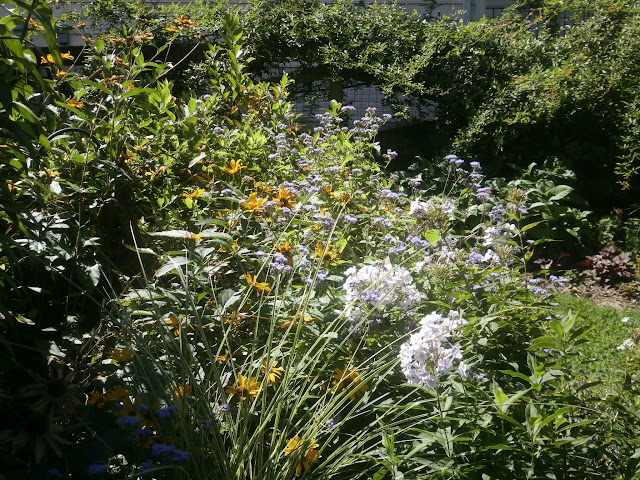 This picture is too bright, but it was so beautiful in the moment that I had to take a few photos. A young miscanthus 'Morning Light' against phlox, helianthus, and blue mist flower.

I tried to capture as much of the magic of my summer garden as I could even if the light was never quite right. 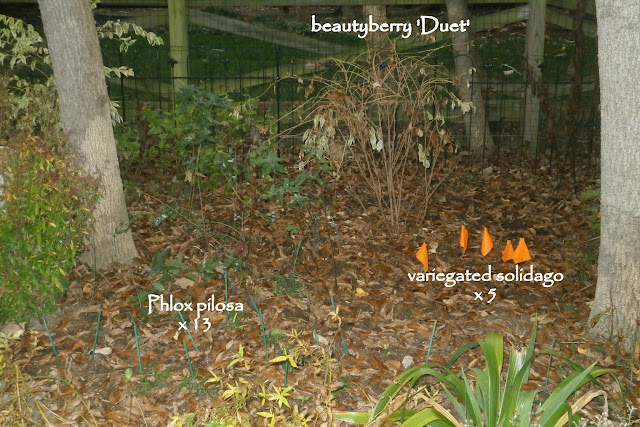 13 years ago this area was moist and sunny but as the trees have matured it's become one of the driest spots in the garden. The struggling monarda was removed and replaced with dry shade loving plants. The beautyberry will grow to be about 4 ft x 4 ft and will quickly fill the back of this border.

This fall, after redesigning parts of my garden, I marked bare root plants and other small transplants with orange flags and bamboo stakes to help me remember where they are. 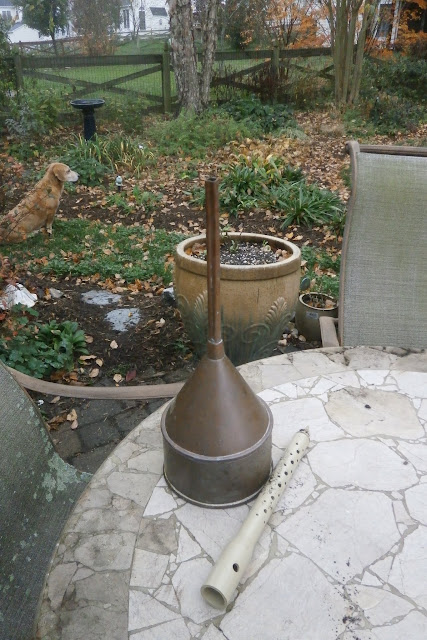 Most of the water directed towards the 'Little Zebra' miscanthus near my back door ends up falling through the empty space between my pots. I was tired of watering the patio so I came up with this solution instead. A 14" long watering spike from the always fabulous Lee Valley Tools was placed at angle into the root ball. I added an old copper funnel to the spike so I'd have direct access to the roots without having to worry about watering the patio. 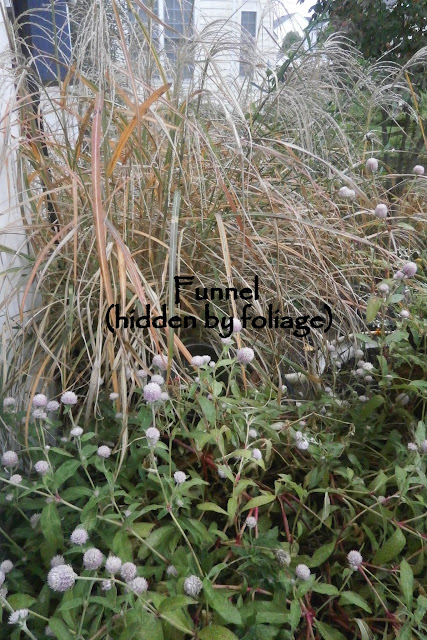 The watering spike is lined with mesh to keep it from being clogged by the roots. The funnel is hidden by the foliage but still obvious enough that I can find it when I need to water.

To prevent small problems from becoming big disasters, a combo that makes my blood boil, I looked for ways to solve the problems that cropped up this summer so I don't have to deal with them next year. 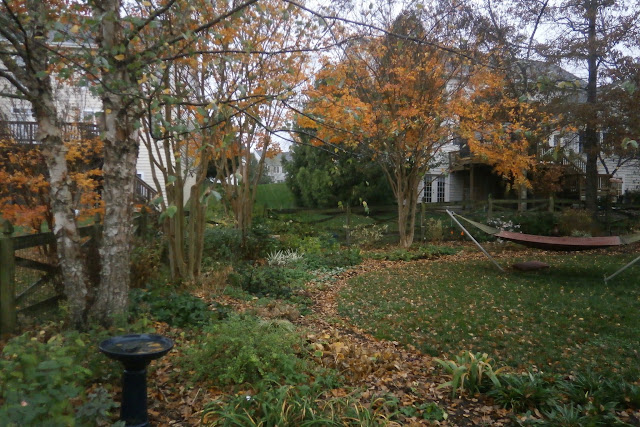 Part of the shade garden on a cloudy, rainy morning.

The soil has been amended and mulched and I'm ready to put the garden to bed. 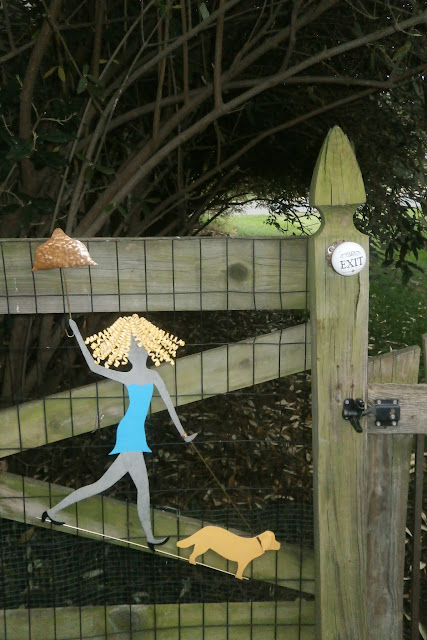