I want a meadow. I do not have a meadow nor do I really have a good spot for one but I don't care. I want a meadow. What I do have is a hot, dry sunny slope with clay soil so a meadow it will become. I started working on this project in the fall of 2018, plugged away at it again last spring, and finally completed the project this fall.

The slope was covered in wild, weedy, seedy grass that had invaded my front garden. Carved into pockets were clumps of orange milkweed, liatris spicata, Bradbury's monarda, Tennessee coneflower, prairie dropseed grass, and rudbeckia hirta.  I needed plants that could survive off rainfall and those held up just fine. Fortunately, clay soil retains moisture, which is helpful. 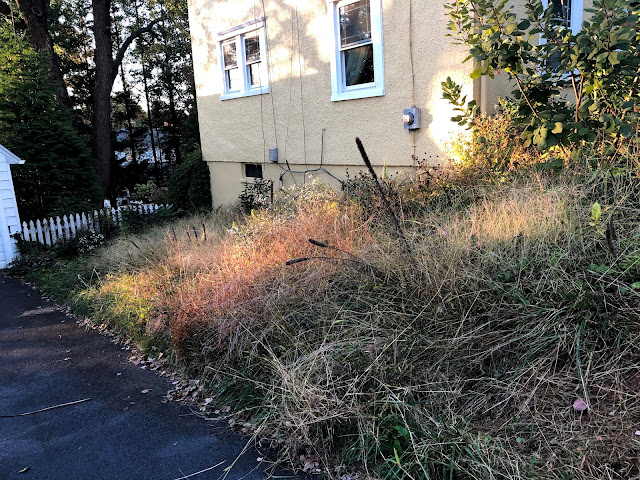 Remove the plants I don't want. This was a massive undertaking because it involved removing all the grass. I started by pulling up the top growth in a search and rescue mission to uncover the perennials I'd planted previously. I then dug up the entire slope and sifted through the soil to remove every root and runner from the wild turf grass. 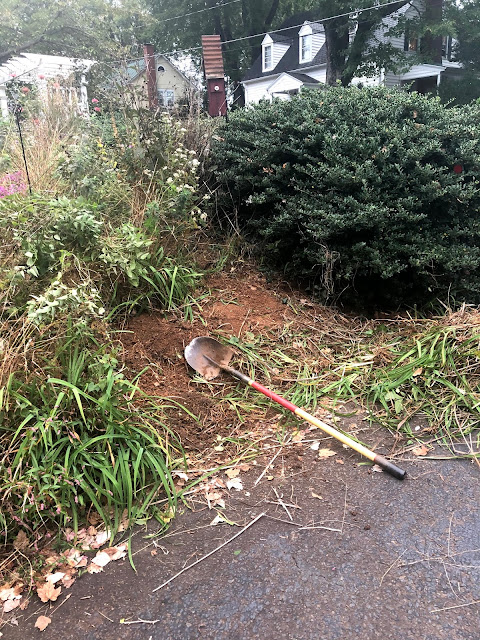 The driveway is my neighbor's property. 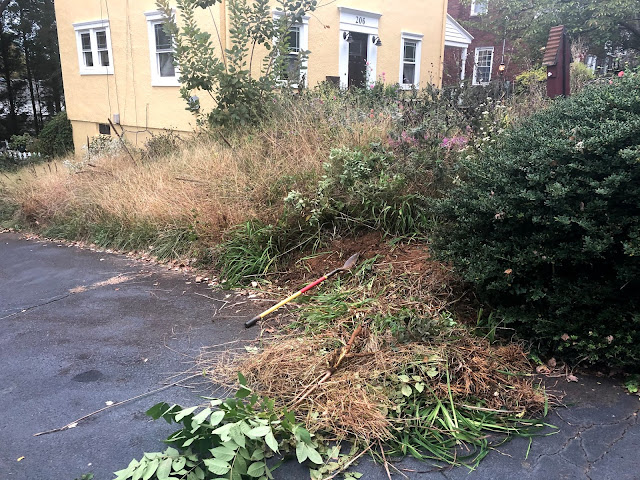 Every plant that doesn't support wildlife came out, including a large stand of orange day lilies and large black walnut tree seedlings. The shrub at the top of the slope is part of an evergreen Japanese holly (Ilex crenata) hedge separating my garden from the street.

Add a drainage canal. I dug a trench between the slope and my neighbors driveway and filled it with pea gravel to help prevent rain from running downhill and washing into his garage, which is at the end of a downward sloping driveway. This also works to funnel water into the garden at the bottom of the slope. 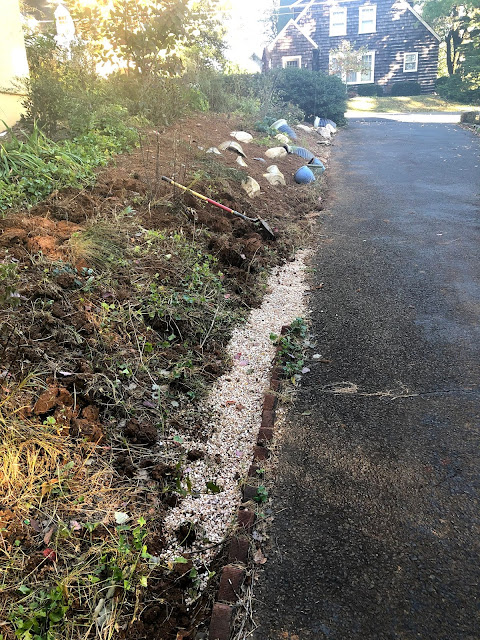 The trench starts at the hedge by the street and runs the length of the slope. I covered it with soil. 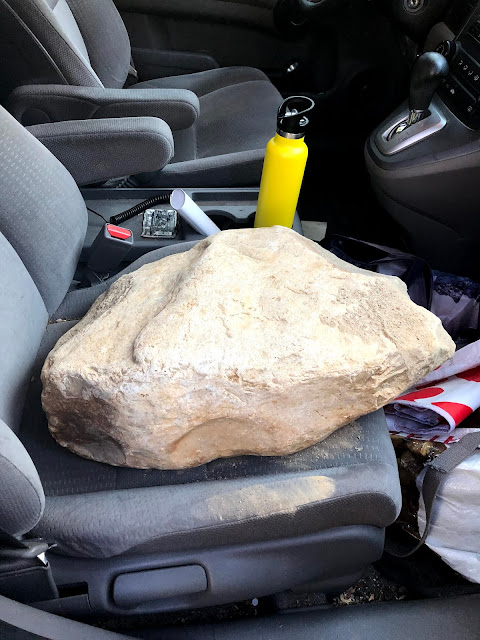 The boulders are much larger than they look in the other pictures. They're partially buried in the soil to stabilize the slope. 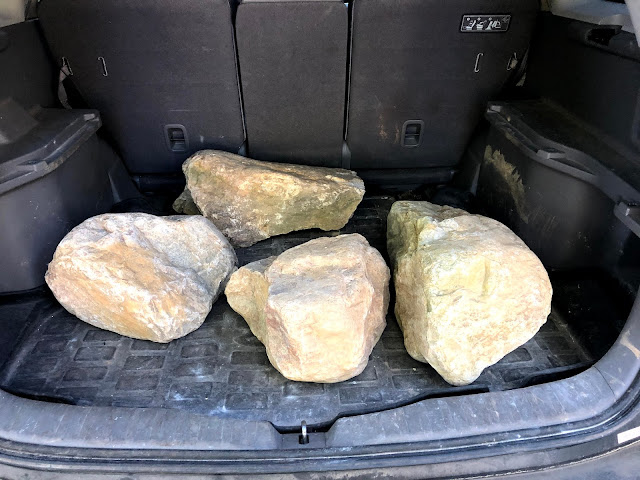 They were impossible for me to carry so I had to maneuver them into my wheelbarrow and dump them onto the slope. 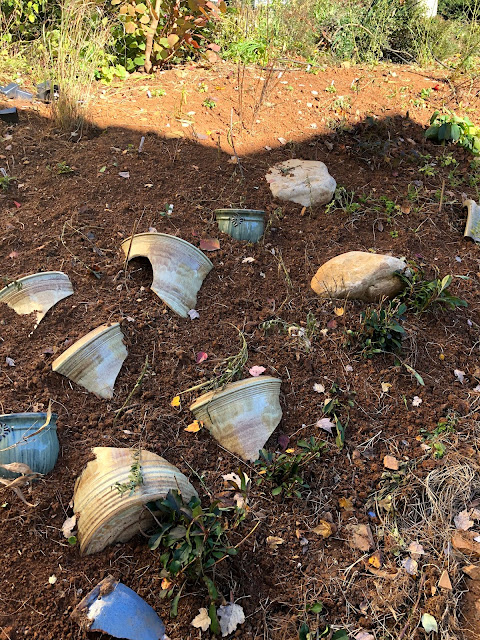 I enjoyed breaking these pots.

Add the plants I do. It's hard to tell in these pictures, but the slope is now packed with plants. There are over 100 orange milkweed plants along the slope and my summer garden was full of monarchs. I had a nursery bed packed with milkweed that I started under lights last January that thrived this summer. Dozens more seedlings that I'd planted this spring and thought had been suffocated by the grass were discovered when I found the dormant roots while sifting through the soil to remove the grass runners. 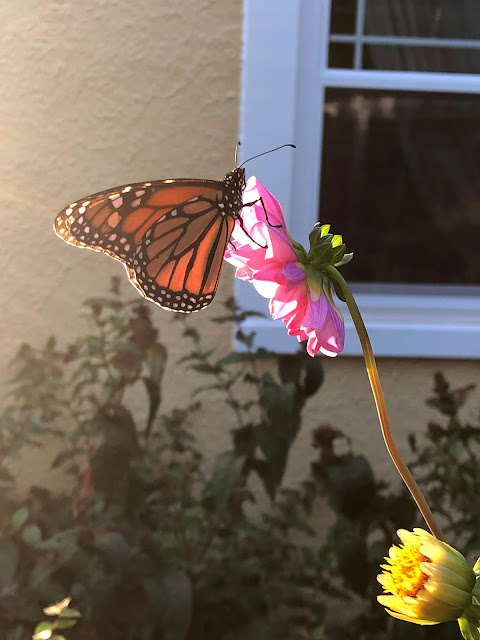 Monarch on a seed grown dahlia 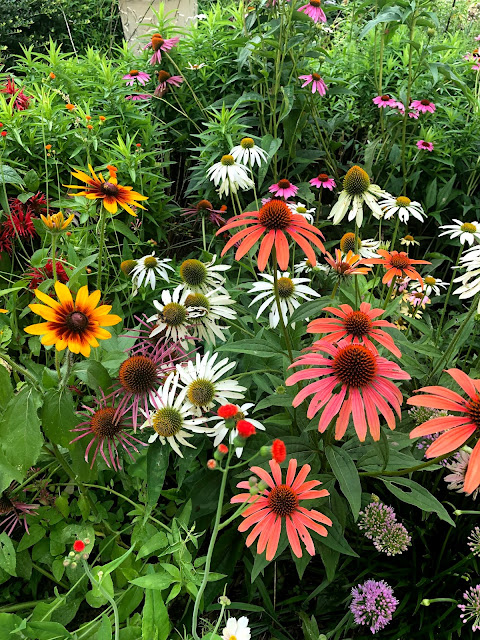 Seeds from the different coneflowers growing in the front garden were collected in a bag, tossed together and then sown in empty pots last fall. The seedlings were transferred into the meadow. I have no idea what they'll look like when they bloom!

Native grasses, goldenrod, penstemon, and asters were also added as were some dwarf perovskia and about two dozen curly parsley plants for the swallowtail butterfly caterpillars. 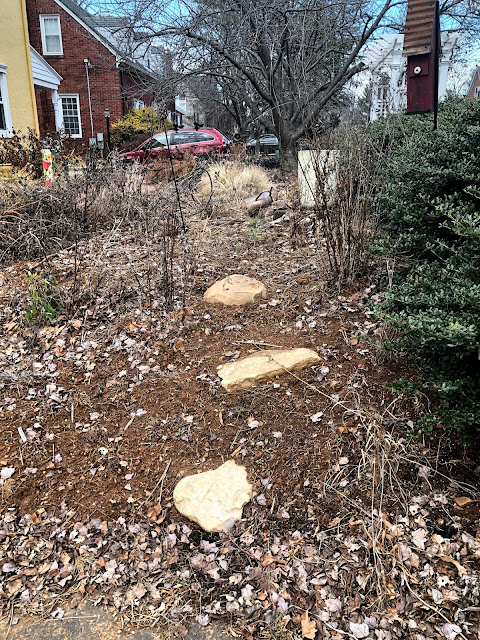 Build in steps so I can access the back of the garden and the top of the slope. One corner of the front garden was inaccessible this summer and I let it go simply because I wasn't able to bushwhack through the jungle to maintain it. The perennials survived but so did a lot of weeds. 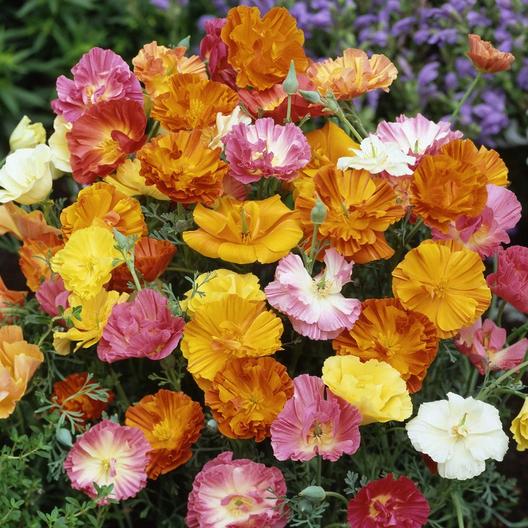 Scatter wildflower seeds over bare soil to fill in the gaps while I'm waiting for the milkweed, which is slow to emerge in the spring, to fill the slope. I scattered seeds for California poppies, a reminder of my home state, centranthus ruber (Jupiter's Beard) and native partridge pea. They're all easy to grow and the poppies will provide spring color. 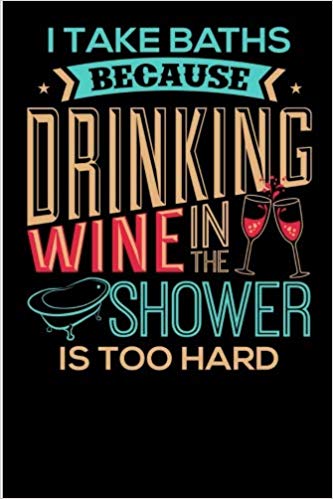 Soak in the tub with a drink once I'm done or as needed. 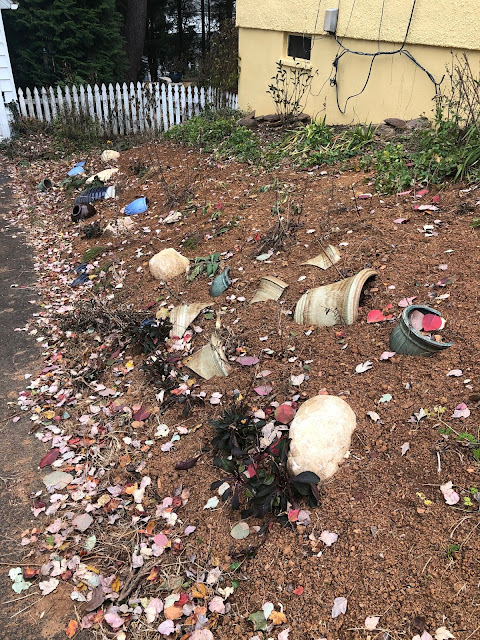 I know the slope will fill with grass again next spring since removing all of it was impossible but at least there will be significantly less grass and more flowers. 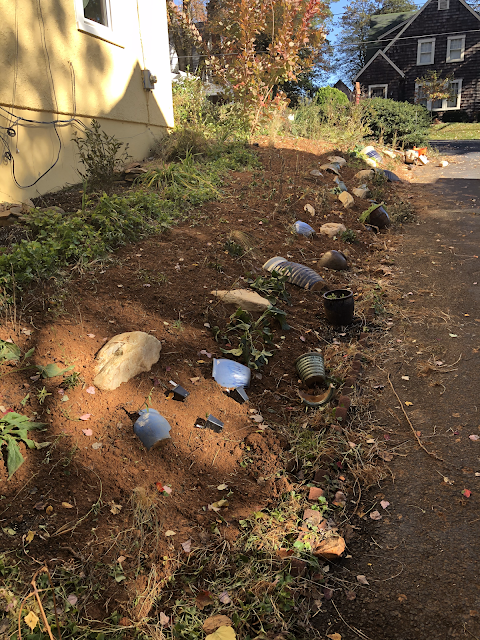 'Miss Kim' lilacs grow next to the house and will be a beautiful green backdrop to the colorful meadow. Native violets were left since they provide larval food for frittilary butterflies.


* Growing native wildflowers from seed is effortless. In the fall/winter toss some seeds on the surface of a pot full of old soil left over from the summer and ignore them. Next spring, thin out the seedlings and water them all summer. That's it.