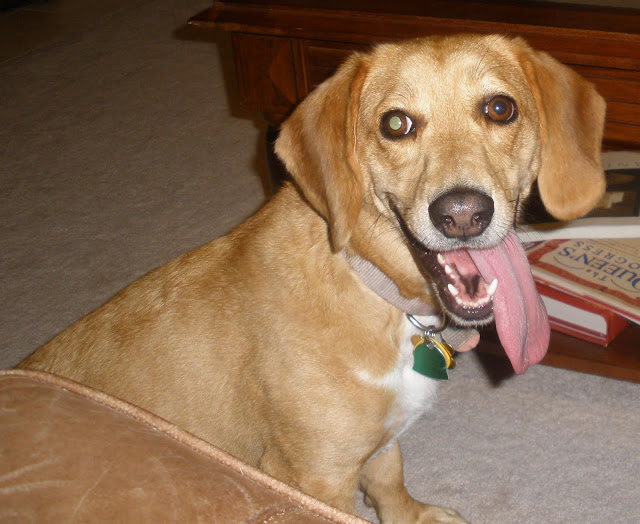 Lucy, a bassett/beagle/golden retriever mix, was adopted from a no-kill shelter that rescued her from a high kill shelter that had scheduled her euthanasia. She has cotton candy for brains but is one of the silliest, most affectionate dogs I've ever had. She's an amazing shrew hunter and is absolutely convinced that she WILL catch a squirrel some day! 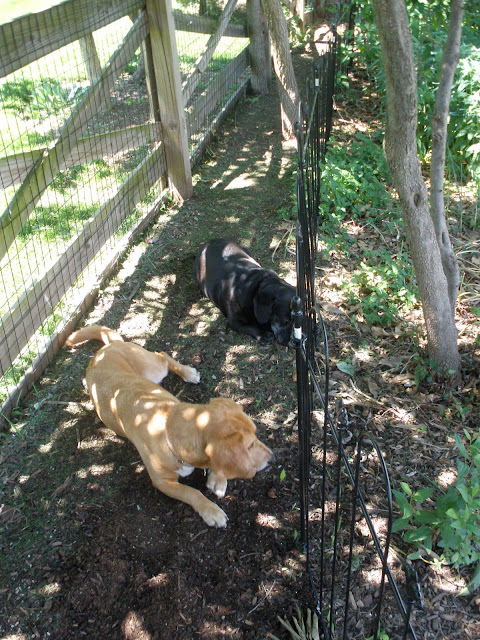 The dog run is a semicircle that curves through the back of one of the gardens. It runs parallel to a wooden fence that I share with my fabulous back yard neighbor. The dogs were constantly running amok through the garden and had created a path that allowed them to keep an eye on the squirrels and birds while also staying cool in the summer. Baby and Chance didn't pose as much of a garden problem as Lucy, who was quite determined to dig up my plants, and run joyously around the yard with them in her mouth, before depositing them, withered and chewed, in the grass. The only way to keep my gardens whole was to install an Invisible Fence between the garden and the grass. However, I couldn't blame her for wanting to hang out in the shady wilderness of the back butterfly garden, so I created this dog run for her and our other dogs. It was an instant hit with the canine crowd. Even our revolving door of foster dogs usually run right through it when they go out exploring in the back yard. 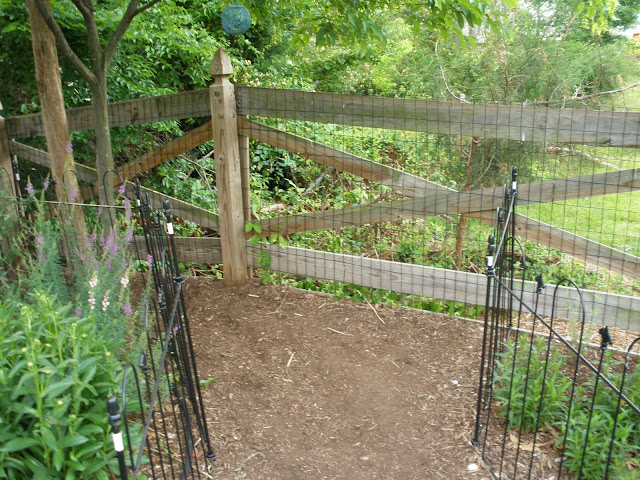 This is one of the entrances to the dog run. The dogs always ran into the garden at this spot, so I took out the plants I had there and put down mulch. The first "dog run" consisted of a little white picket fence that my son and I put up in a hurry to keep Lucy out of the garden. She would run through, her happy tail waving, as she looked for her next "re-landscaping"project. 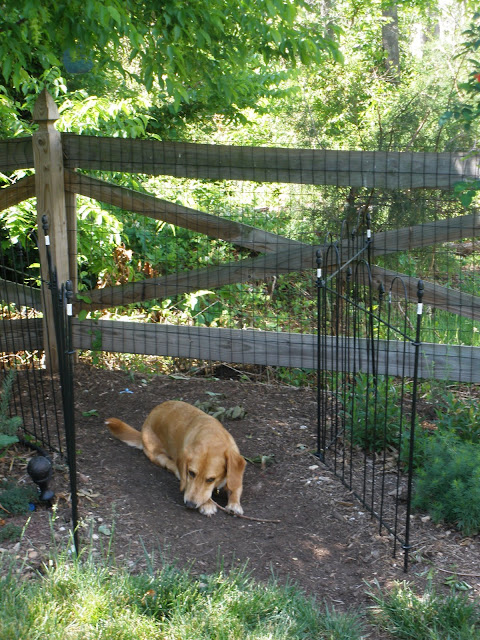 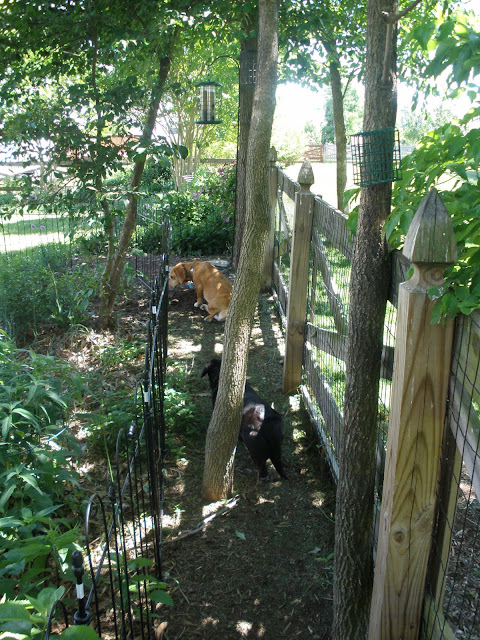 Chance, Baby, and Lucy in the dog run. Monarda, joe pye weed, and phlox grow in the garden next to the fence. I bought the fence sections at Lowe's. The plants in the garden are now so thick it's hard to see the fence. 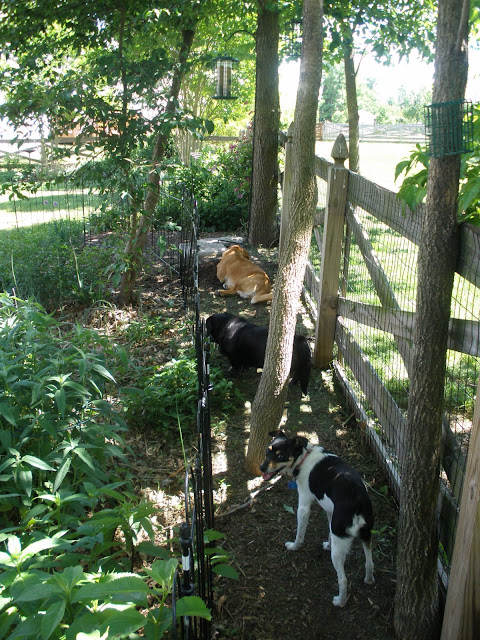 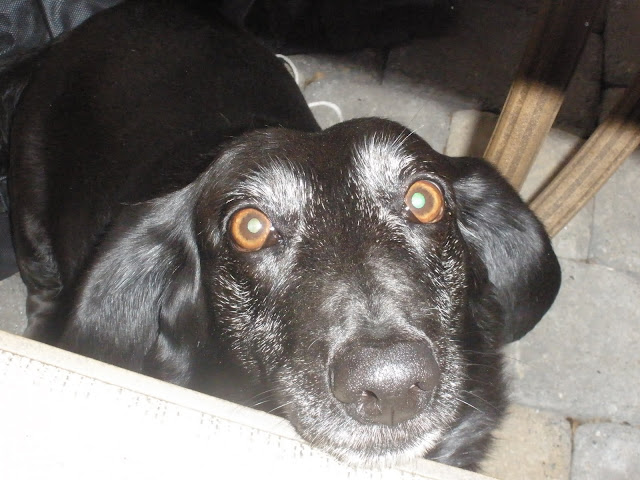 Baby, a very sturdy corgi/daschund mix, was adopted at the same time as Chance from a no-kill shelter. Her previous owner had been loving but could no longer care for her and Chance when she was moved to a nursing home. But her past is a mystery since she came to us with a broken tail as a result of having been beaten. It's possible that we're her third family and that the abuse happened before she was adopted by her previous owner but we'll never know the whole story. She is the leader of the pack and occasionally "goes on safari" into the garden. Seeing her face pop into view from in between the plants while I'm gardening is always funny. 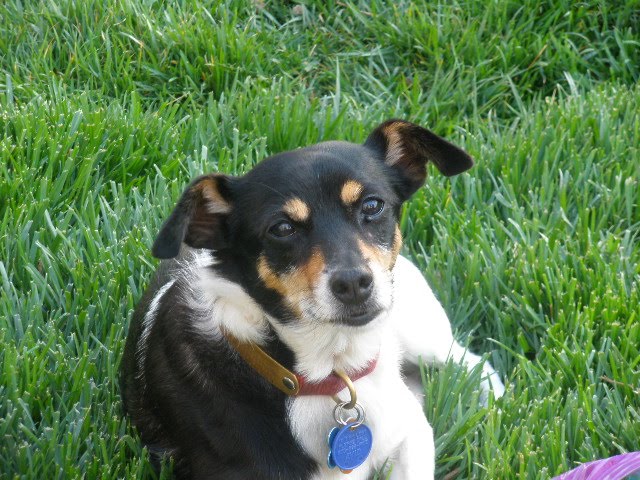 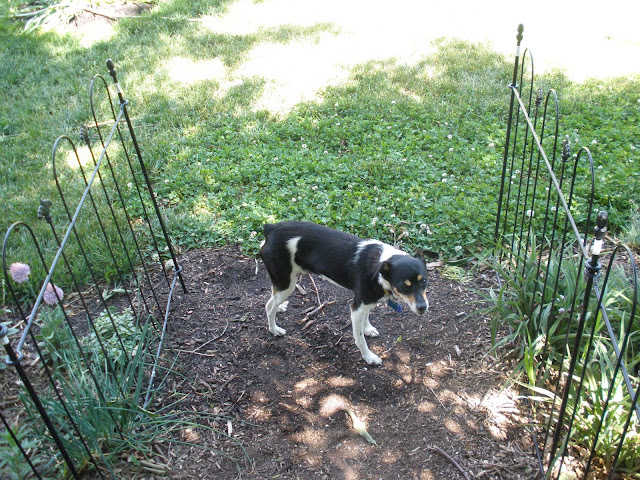 Chance, a needy and neurotic but incredibly affectionate rat terrier, was adopted as a package deal with Baby. They had been together since they were puppies. He has permanent throat damage from having been abused but is always by my side and lives a life of bliss and ease. He is always in the garden chasing bugs but his paws are so small, they don't do any damage. Here is Chance at the other end of the dog run. The dogs love to lie at either entrance and watch the birds, or nap, whichever is most appealing at the moment! This picture was taken in early spring when the chives were still in bloom. (Chance died in March 2012 of liver cancer.)


Scout, one of my foster dogs, is learning how to be a dog and has been enrolled in Get Off Yer Butt and Do Dog Stuff 101 by my other three dogs. His mom, Genie, also attends Dog 101 class and is progressing quite well. The picture shows Scout in the back corner of the dog run. He looks similiar to Lucy but is much more golden, while Lucy is a blonde. 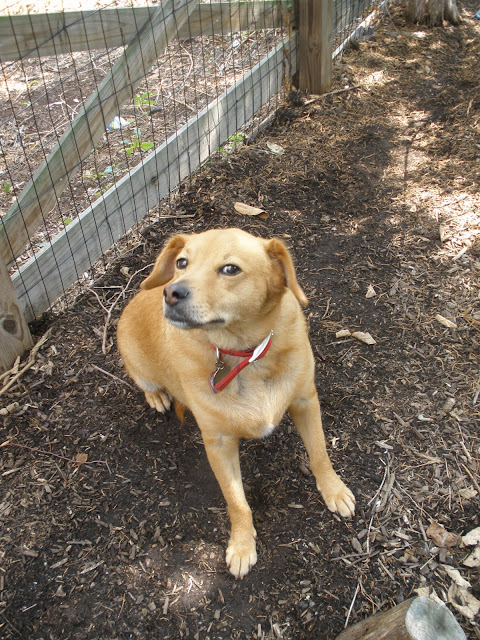 Hello, I'm Scout, president of the Canine Narcoleptics Society. I'll head out to the garden to trample the liatris after I finish my nap! Waking up and walking downstairs is exhausting. I can't stay awake! 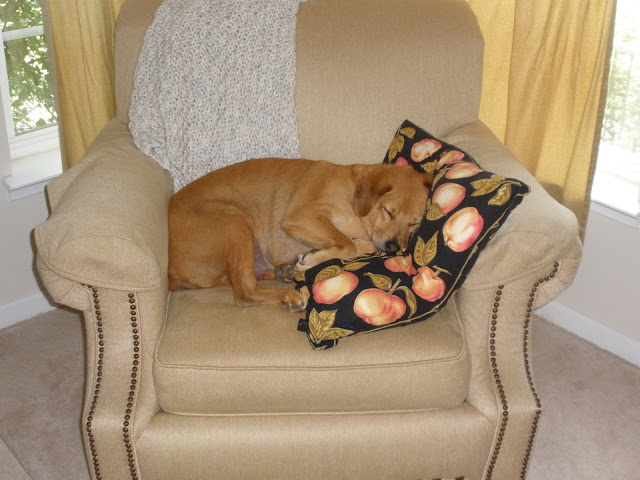 Why go out in the garden when I can just lay on the couch on a flowered pillow and enjoy the air conditioning? Hey, lady, if YOU wanna sweat, you go out to the garden! I'm staying cool right here! 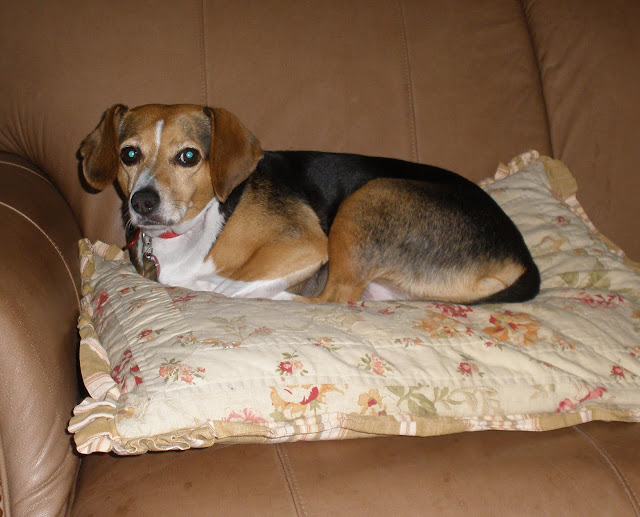