I have a wonderful friend who insists on watching the latest reality series 'Naked and Afraid' while completely nude. While this may sound innocent enough, the potential for disaster is enormous. His clever wife refuses to keep their three children, aged 9 to 14, busy while he enjoys his show, thereby heightening his terror. While I don't share his hobby, naked and afraid has become a theme with my roses this summer as I've tried in vain to save them from the fungal disease, blackspot. 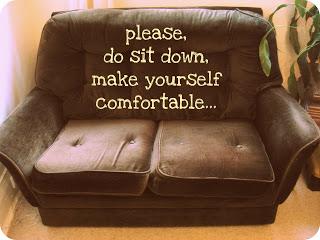 Note to Self: Do not sit on your friend's couch. Ever!

A cool, moist spring followed by a cool, moist early summer is usually the kind of weather I dream about. But this year I noticed blackspot on my 'Happy Chappy' rose by late May. By the time I made the discovery, the blackspot had spread to all of my other roses. Knowing 'Chappy' was the source of the scourge, I pulled him from the garden and  tossed him in the trash. Our fabulous weather, while providing an abundance of lush green growth, was also the perfect breeding ground for fungal diseases. 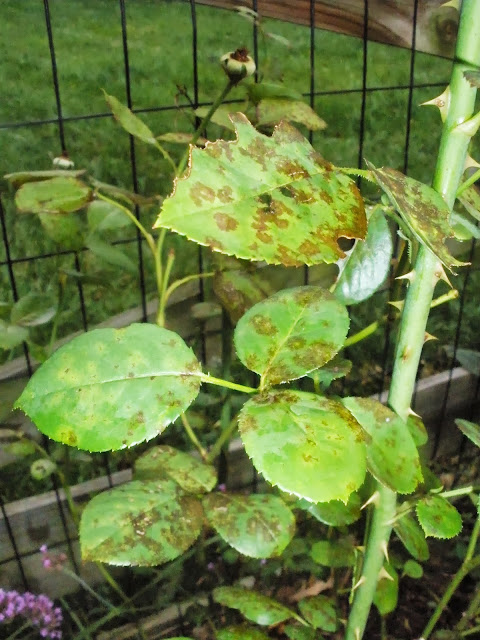 Blackspot on my roses 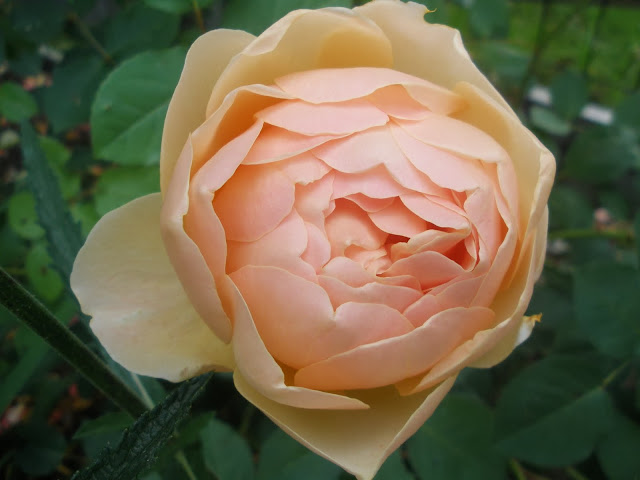 'Jude the Obscure' before the blackspot 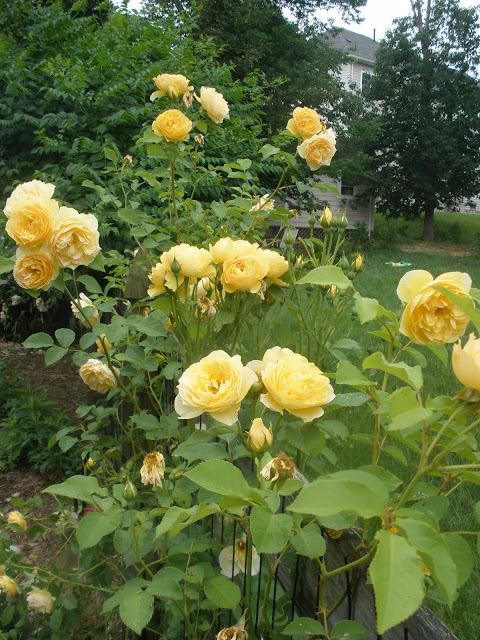 'Graham Thomas' before the blackspot

In an attempt to stop the disease, I stripped every leaf from every affected rose. They looked hideous. To compensate for taking away their ability to photosynthesize, I amended the soil around each plant with worm compost and alfalfa meal and watered it in with kelp meal. Worm compost has inherent anti-fungal properties and alfalfa meal, available in bulk at farm stores,  contains a naturally occurring plant growth hormone.

I lightly pruned the roses, which was necessary in order to reach each diseased leaf without being stabbed, sliced, or impaled. I sprayed the unaffected leaves with an organic copper fungicide and later with a Dr Earth fungicide. I also sprayed the leaves with a baking soda/Castille soap solution. But the blackspot didn't go away. The 'Westerland', my favorite rose, was so heavily affected, it lost every single leaf. My rose looked completely naked and I was was afraid I was slowly killing it. 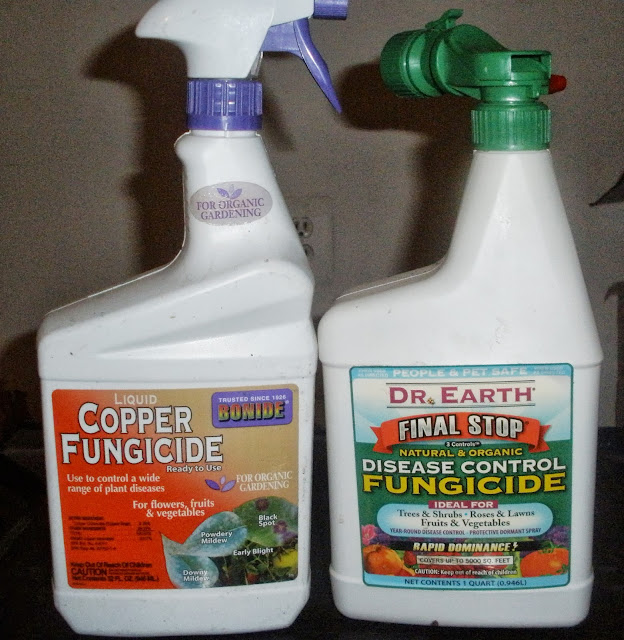 The Liquid Copper was strong enough to kill the athracnose on my perennials and the tiny bit of blackspot on my 'Peggy Martin'. The Dr Earth smelled strongly of cloves and had a weird nozzle that made it hard to tell how much fungicide was being sprayed when attached to the hose. I don't think it was as effective as the packaging would lead you to believe.

The results of my interventions were mixed. All the new growth on my 'Graham Thomas' and 'Westerland' developed more spots but the few spots that appeared on 'Peggy Martin' were isolated and never reappeared. My 'Night Owl', 'Jude the Obscure' and 'Abraham D'Arby' had less spots after their new leaves grew in but were still battling the disease. I finally reached the point that I wasn't sure if I was helping or hurting my plants. Despite only spraying in the morning or evening, some leaves appeared burned and some leaves had black spots while others were purple. 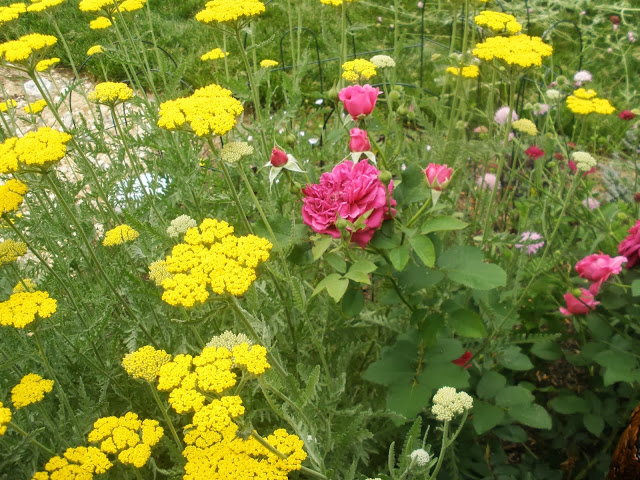 Even my newly planted William Shakespeare succumbed to blackspot.

I had no idea how long I should wait between spraying the fungicide and the baking soda/soap solution. Hours? Days? Worried I was contributing to the problem rather than solving it, I just gave up. With two weeks of hot, dry weather behind me, I'm convinced the heat and lack of rain actually helped the roses more than I did. I kept them watered with soaker hoses which prevents the fungus spores from spreading by eliminating water splashing from leaf to leaf.

The Label That Lied:

Desperate to get the disease under control, I decided to try an non-organic approach. I gave up using systemic fungicides years ago because they also contain pesticides. Continued use of fungicides kills the beneficial microbes and fungi that live in our soils, rendering our soils sterile. However, after finding an Ortho fungicide that wasn't labeled as containing a pesticide, I mixed up a batch and gave it a try. I applied it as a drench to the soil, hoping a chemical shock would kill off the disease.

I'd been discussing the problem with a friend who has a PhD  and is a biology professor at a local university. She reassured me that unless I wanted to blow dry every leaf on a nightly basis, black spot was inevitable. But it wasn't until I mentioned which chemical was in the Ortho Max, that I realized I'd been duped. According to the agency that regulates how agricultural chemicals are classified, a fungus is considered a pest and therefore, all non-organic fungicides will also contain a pesticide. The chemical in Ortho Max has been shown to kill bees, birds, and all aquatic invertebrates. Accidentally applying it as a drench when I should have sprayed it was the best mistake I've made all year. But I was furious and felt like I'd been lied to by Ortho. 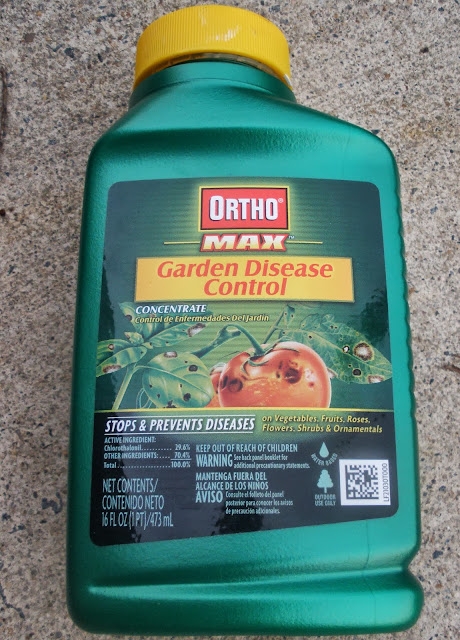 The main ingredient in this is chlorothalonil, a registered pesticide.

A recent study has linked Colony Collapse Disorder in bee hives to pesticide tainted fungicides. As much as I want a garden full of gorgeous perfect roses, my desire to protect the pollinators who depend on my flowers is even stronger and I may have to learn to live with a little blackspot.

How I Helped Create My Own Problem:

My garden is densely planted which makes locating and destroying every diseased leaf tremendously difficult. The leaves that fall into my neighbors lawn are mowed, making their retrieval virtually impossible. I had a problem with blackspot last year, too, and was hoping a cold winter would kill the spores. Despite having planted all of my roses in areas with excellent air circulation, this was my second year battling the same foe. Because I can't remove every diseased leaf and live in a humid climate, my garden has become a breeding ground for blackspot. 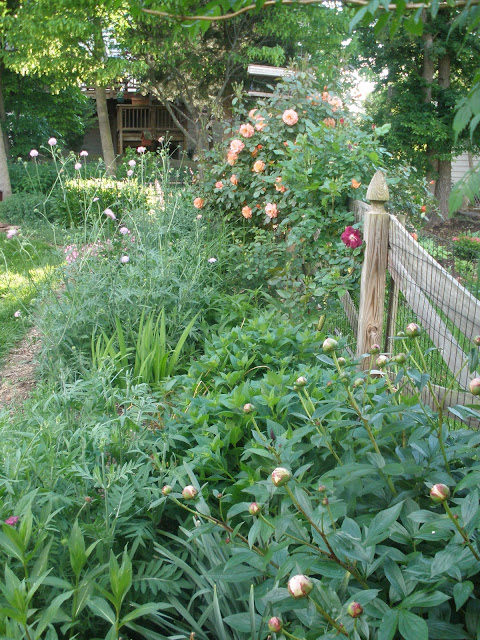 This photo shows how densely planted my garden is. All of the roses that suffered the worst blackspot are in the same area. Because I have so much shade, the area along my fence offers the most sun and best air circulation. 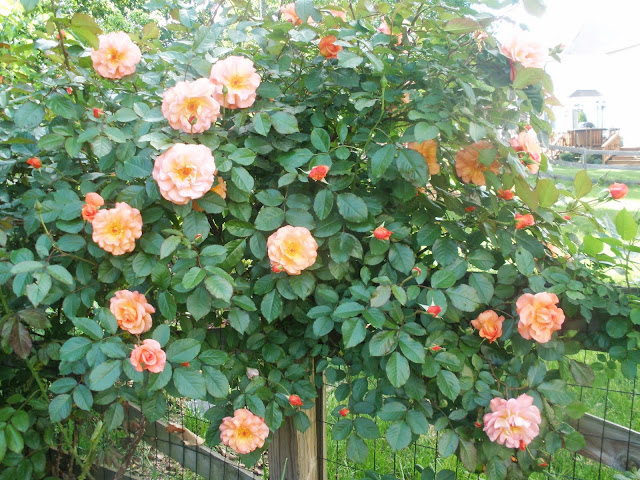 'Westerland' sailed through last years fungal attack almost spot-free but was the hardest hit this year. I don't understand why. 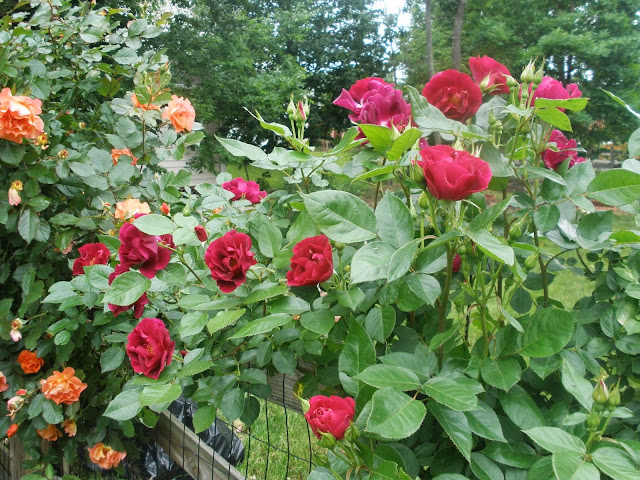 A small 'Jude the Obscure' grows between much larger 'Westerland' and 'Night Owl' roses. You can't see it in this picture. 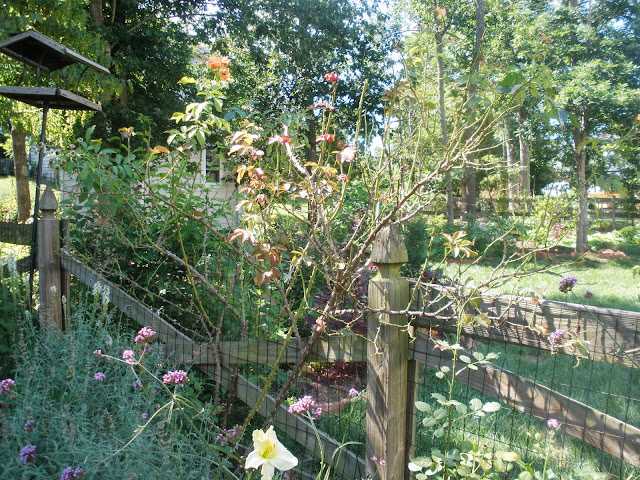 This is what 'Westerland' looks like right now. It's so beyond hideous I don't even like to look at it. It's been slow to put out new growth and has been attacked by beetles as well as rose worms. All were promptly squished by me and I felt no pity for any of them.

The Big Observation I Kept Missing:

In the midst of all the drama, one rose didn't have a single diseased leaf. It was healthy and covered in spot-free leaves. Why? What had I done differently to that rose that I hadn't done to my other roses? Last fall I dug up my Sceptre d'Isle rose to give it more room, more sun, and removed several of the surrounding plants to give it more air circulation. In the process, I discovered it's roots went down two feet, requiring the removal of a massive amount of soil and mulch. Once it had been tucked into its new home, it was surrounded by fresh soil and new mulch. Any diseased leaf had been either removed or destroyed in the process, preventing the fungus spores from overwintering. 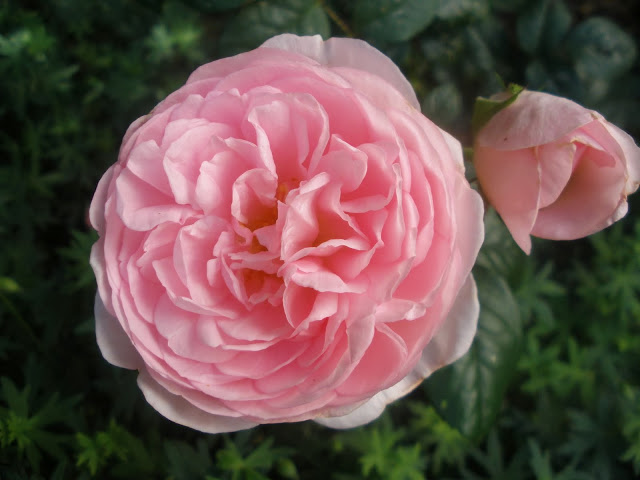 'Sceptre d'Isle" has remained spot-free all summer. It, as well as 'Abraham d'Arby' and 'Peggy Martin' , are all in different parts of the garden, away from the other roses.

I am still collecting every single leaf I can from the ground and have free reign to wander into my neighbors yard to pull leaves from their grass. This fall/winter I will remove and destroy all the mulch from the beds that include my roses. The top inch or so of soil around the roses will also be removed and replaced with compost and new mulch will be laid. Next spring, as soon as leaves appear, I'll spray them with the baking soda/Castille soap spray to help prevent the fungus from taking hold.

Do you have any other suggestions?
Posted by Casa Mariposa