Bent but not broken...

Have you ever watched a movie where so many rotten things happened to the main character that you were either laughing or cringing? That pretty much describes the week I've had....  I just haven't gotten to the laughing part yet. It will come. It always does.

I spent almost the entire weekend in the garden. I finished my transplanting, took down two small trees, redug all the trenches between the grass and the gardens, and started lightly mulching all the new plantings. I'm sore but exhilarated. Hard work always clears my head.

Do you grow impatiens in your garden? I usually grow them in pots but last summer I stuck a few in the ground in between the columbine. They were beautiful and carefree, and even though they didn't attract any wildlife, they did attract me, and that was enough.

This past winter DC and northern VA were walloped with two massive blizzards. In a normal winter we may get a few inches of snow but anything more is unusual. So when Snowmageddon aka Snowpocalypse hit, delivering almost 7 feet of snow in less than a month, I figured my impatiens were goners. 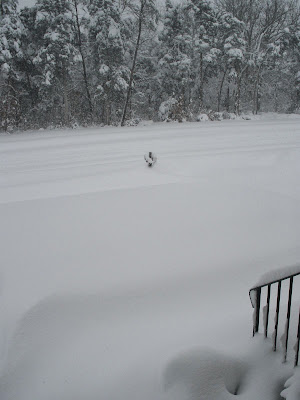 This is the view from my front porch. The stick in the distance is my mailbox. Most of the snow melted between storms.


Each storm brought about 3 ft of snow plus another foot or so inbetween the storms, just to keep things interesting. When I lived in upstate NY near the Canadian border, heavy snowfall was a regular part of winter and the snowplows cruised the roads daily. When I lived in North and South Dakota, snow and subzero temps were typical. During Snowpocalypse, the entire area shut down completely, including  many government offices. 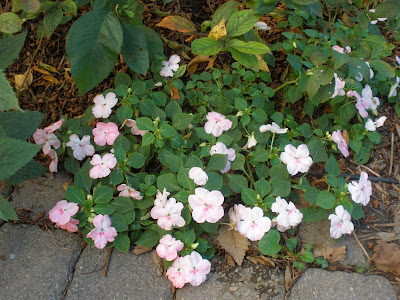 So imagine my surprise this summer when a patch of impatiens popped up in the garden, not too far from the original cluster. I hadn't expected the seeds to survive such a snowy winter and was thrilled and comforted to see their pink faces brightening the shade. I spent the weekend thinking about the impatiens and other plants that sprouted with such vigor this past spring. They could have floundered and died, but didn't. They survived and so will I. :0)