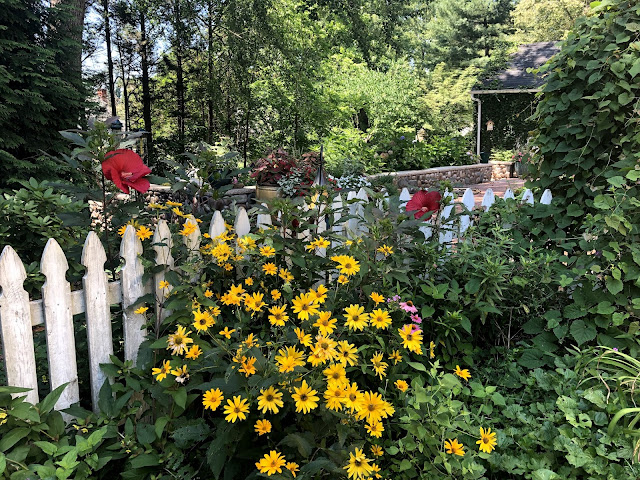 I always wonder why we think others expect perfection of us. We carefully crop out what isn't beautiful or noteworthy to create the illusion of faultlessness. Give me reality over bullshit, any day. I recently burned the crap out of a boat load of plants and have the Instagram unworthy pics to show you. 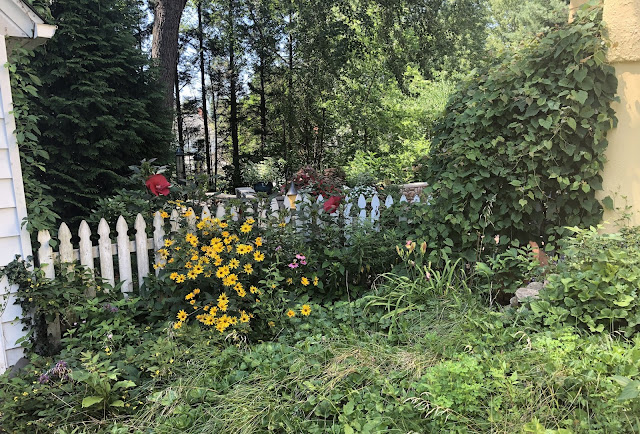 This area is part of an ongoing project to turn this long side slope into a wildflower meadow. It will take several years.

Last summer I had stone terraces built into my sloped back yard.  Not confident the local soil company would give me true top soil as opposed to fill dirt, I opted to have a zillion cubic yards of pure compost delivered. I filled the terraces half way last fall with compost and leaves and finished the job this spring.  I let a few rainstorms settle the soil and began planting. 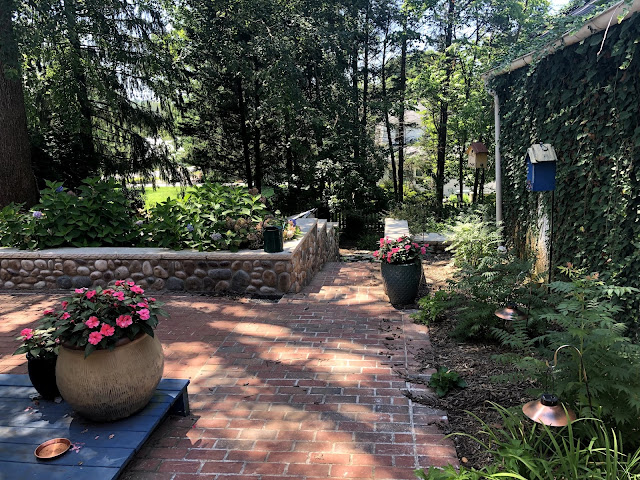 After buying the house in November 2017, I had extensive interior and exterior renovations done, which included adding this brick walkway and stairs. The terraces were added last summer to resolve the problem of a steep slope and massive surface roots from the huge maple tree. 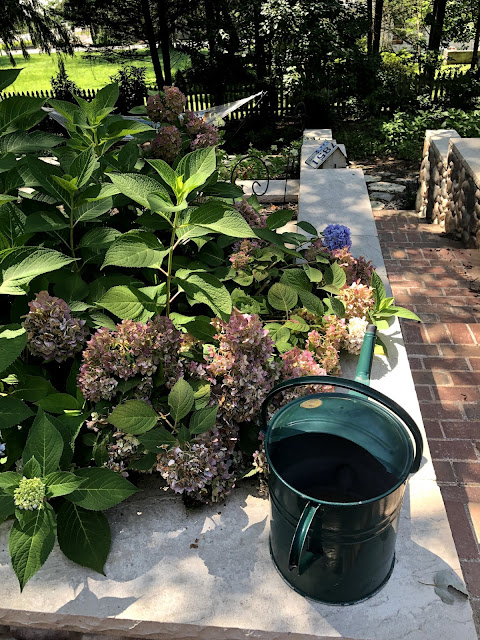 The terraces were built around three existing hydrangea, which were heavily pruned last fall to remove dead wood. There weren't many flowers this summer but there was a ton of growth and they'll be amazing next year.

The plants grew quickly and then stopped. Leaves that should have been deep green were oddly yellowish with red rusty spots. A quick search through one of my favorite garden problem solver books and the internet identified the problem as potassium deficiency. 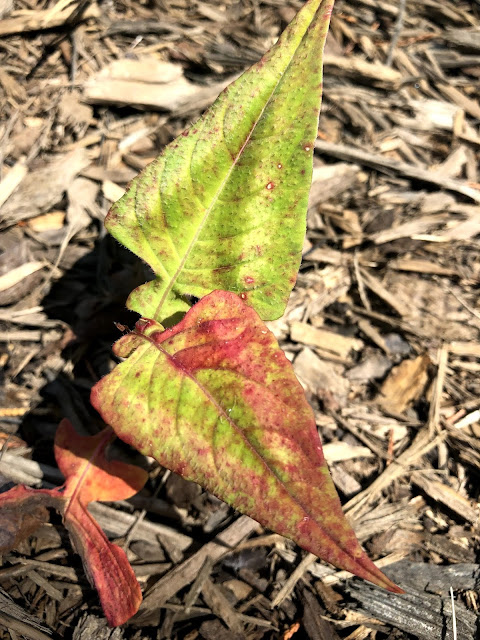 Potassium deficiency occurs when soil doesn't have enough potassium, which is present in clay soils. My compost didn't have any clay loam or topsoil and was remarkably low in bananas, therefore very little potassium. It also didn't have any worms to add new organic matter. After identifying the problem, I bought a bag of potassium sulfate and applied it to the terraces, promptly burning the crap out all my plants. 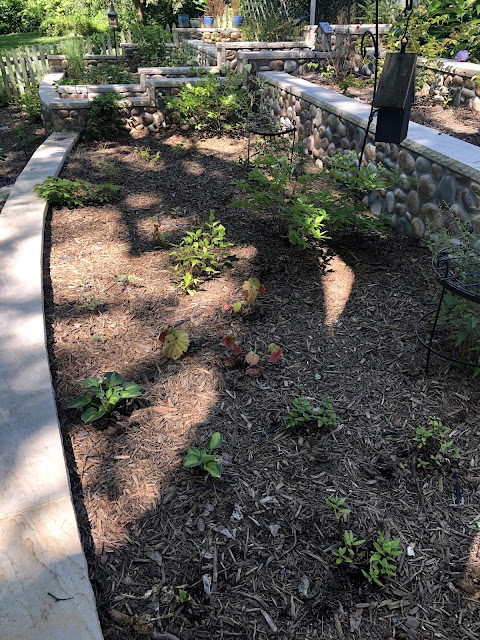 Many plants have been cut back and new growth is starting to show.

Entire stems turned black, their leaves shriveled and curled before dying a ridiculously dramatic death. Instead of solving the problem, I'd made everything worse.  A wet summer worked to push the sulfate deeper into the soil and through the plants, compounding the problem. 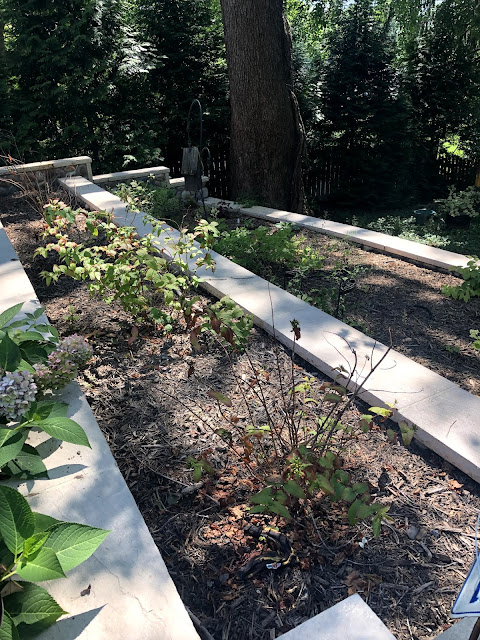 The middle terrace is full of slightly to mostly dead diervilla 'Kodiak Black'. 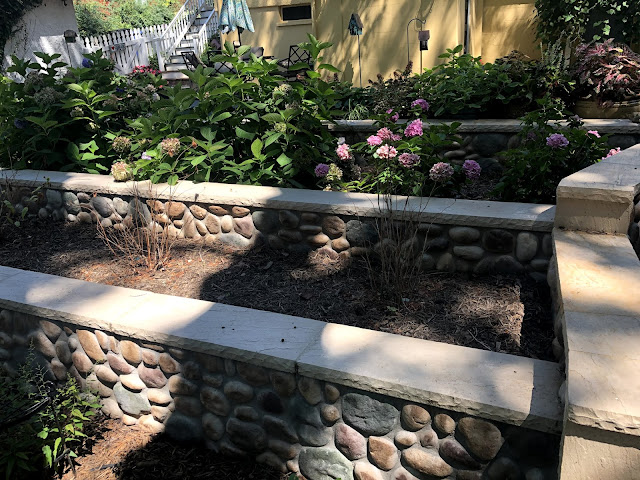 These two are mostly dead but one is showing signs of life.

Shrubs that had been robust looked dead and cussed and spit every time I came near. I apologized, let the diervilla have their say, and walked away. Time is a great healer and if they grow back, they stay. If they don't, they'll be replaced. Their revenge is the money I'll have to spend on plants I shouldn't have killed. 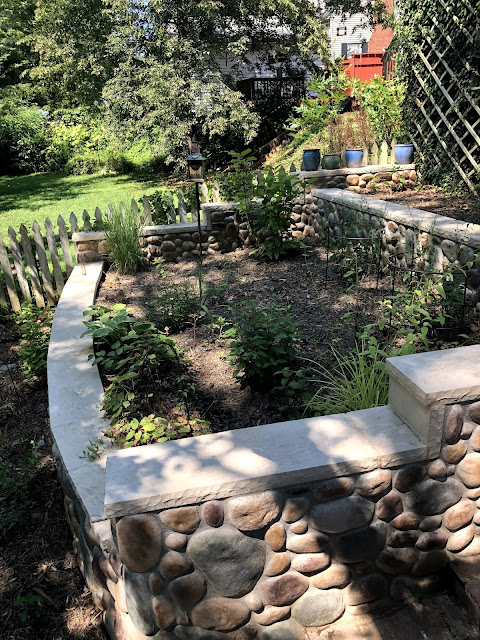 I made sure to wreak havoc equally so both sides of the terraces were affected.

But sometimes what looks like a disaster really isn't. It's just a set back and you're wiser for the experience. I'm having the soil tested and already added 1000 worms from Uncle Jim's Worm Farm.  Despite how introspective and reflective I can be, I'm not much for emotional self-flagellation. I get up every damn day determined to do my best. Some days I succeed and some days I don't. When my humanness gets the best of me, I figure out where I went wrong, make amends, and then let that shit go. 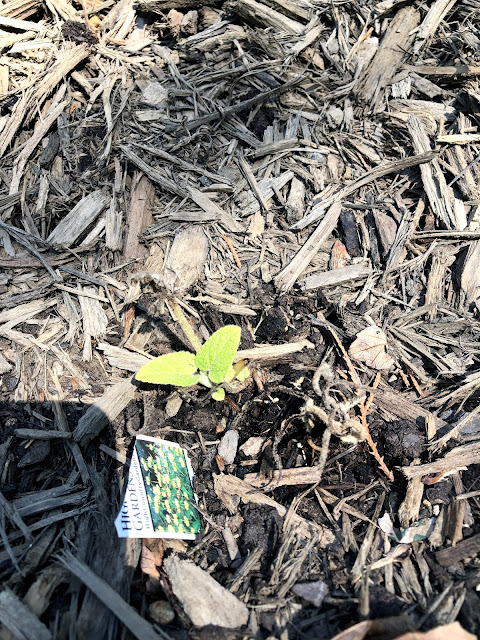 New growth on the phlomis

Sometimes the person you have to be the most patient and compassionate with is yourself. I'll have a better understanding of the problem once I get the test results back, which will be affected by the sulfate that's already been added. I'll amend the soil, the worms will help, and everything will be ok. Plants will recover, new ones will be added, and eventually the terraces will overflow with lush, beautiful foliage and flowers. All will be well, even if it's not all well today. Today isn't forever. It's just today. 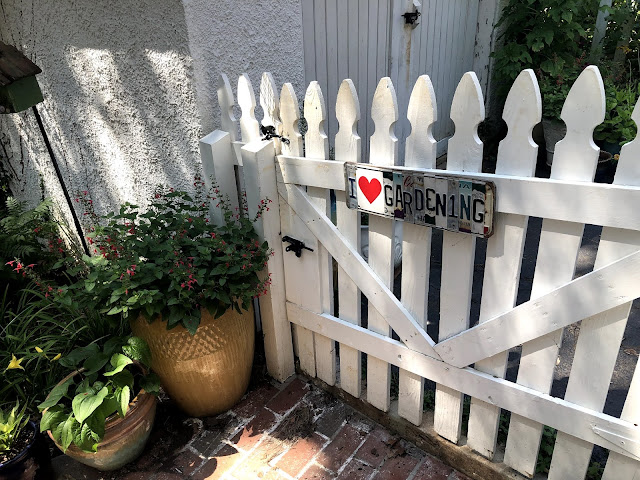