Going With the Flow: No Missed Opportunities to Misbehave

I wish I could tell you that every decision made in my garden is the result of science, propriety, and pure reason but it just ain't so. Sometimes the pull of my heart is stronger than the push from my brain and I abandon logic for love. I suppose this is the part of the post where I tell you that I'm working to amend my goofy ways, but nope. That just ain't so, either. 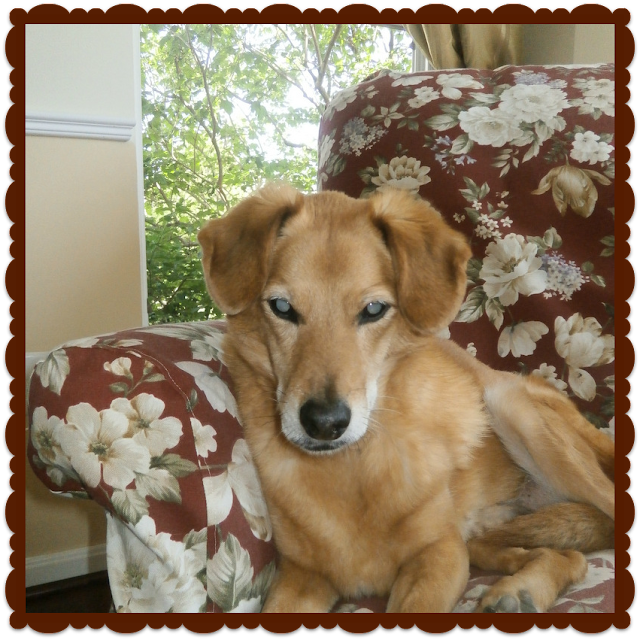 Folly, thy name is Scout.

Last year I extended my rain garden for the umpteenth time. I should have extended it another foot to the pipe where my sump pump deposits water pumped from the foundation into a soggy swale but I didn't. That would have made life too hard for my dog. Instead, I stopped the riverbed about a foot away so when he moved in a straight line from the patio to the grass to his favorite spot near the dog run, he wouldn't have to step on any rocks. At this point in the post you may be thinking, "Sweet Baby Ray, this woman is nuts", but I mostly disagree.  Blinded by diabetes, Scout navigates my garden and house by surface texture and became disoriented when he encountered any rocks. 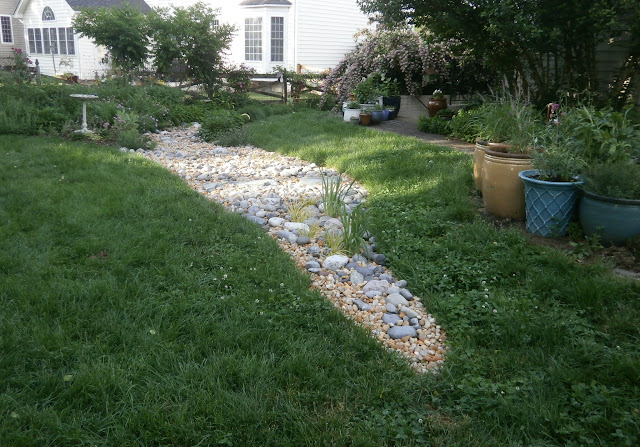 But with my sump pump struggling, it was time to take action. After accidentally wandering into the river bed several times over the past year and not experiencing either instant death or hippo attack, Scout now quickly heads for the grass instead of panicking. Knowing I won't have to drop everything to rescue a terrified, blind dog made the decision easier. But the idea that my basement might flood because my sump pump had backed up made the decision unavoidable. It was time to start digging.

I soon realized, however, that this was more than just an opportunity to extend my riverbed. After a boring winter of being mostly well behaved, it was high time to horrify the neighbors. Would I break out my showgirl dress, erect a mini model of the red windmill at the Moulin Rouge and pump all the water into my neighbors yard? I might. 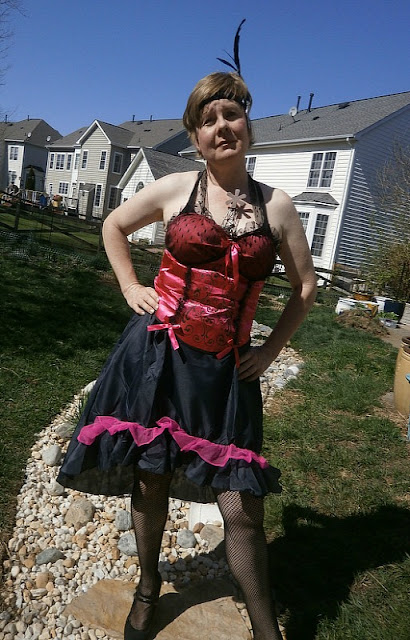 I don't think that windmill is going to work...

Should I dress up in my pirate costume, pour a tankard of something tasty, and just ignore the mess? I could. 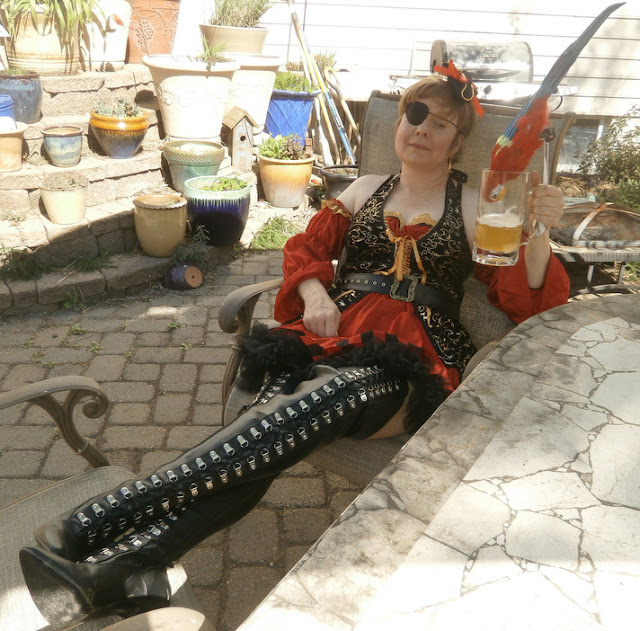 Just for the record, that damn parrot did no digging at all.


Or maybe I should just put on my boots like a normal person and start digging. 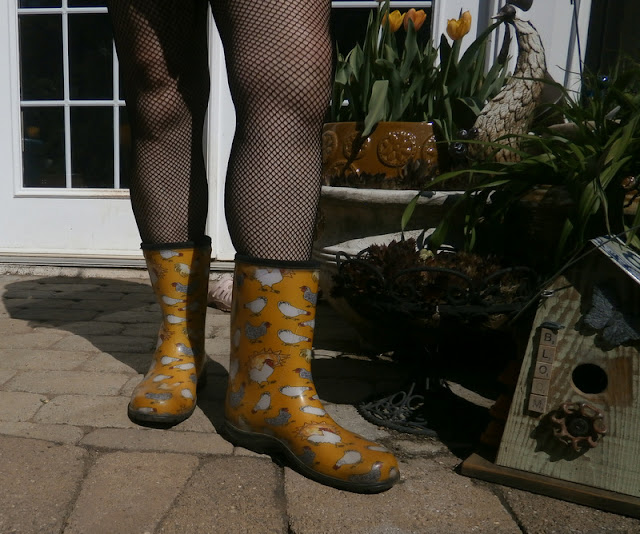 But what I found was surprising. After excavating the drainage pipe, I soon discovered the more I dug, the more water appeared. 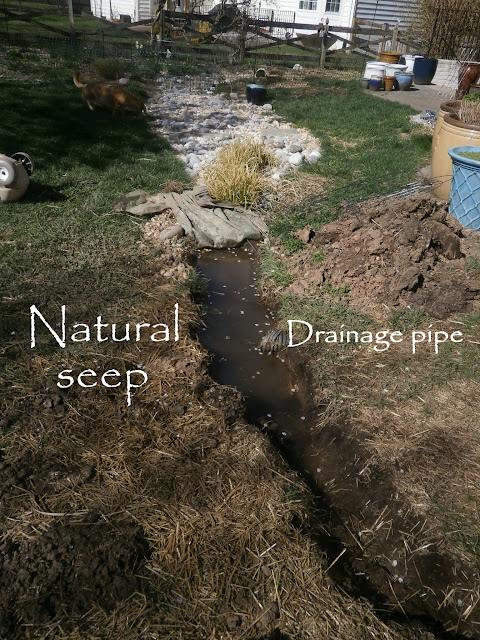 To determine whether I had a groundwater issue or a full pump, I dug a deep hole and stuffed a bucket under the pipe. If the hole filled with water before the bucket overflowed, I had either a spring or a seep. Twenty minutes into my experiment, the bucket was only half full but the hole was almost overflowing. Even though the water wasn't flowing but simply seeping out the ground, I had more water than a twelve inch extension could handle. 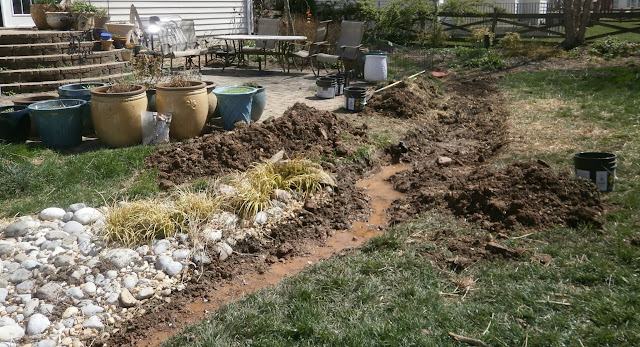 I created a four foot wide main canal and dug a diversion channel to send the water into the deeper parts of the riverbed and away from the drainage pipe. 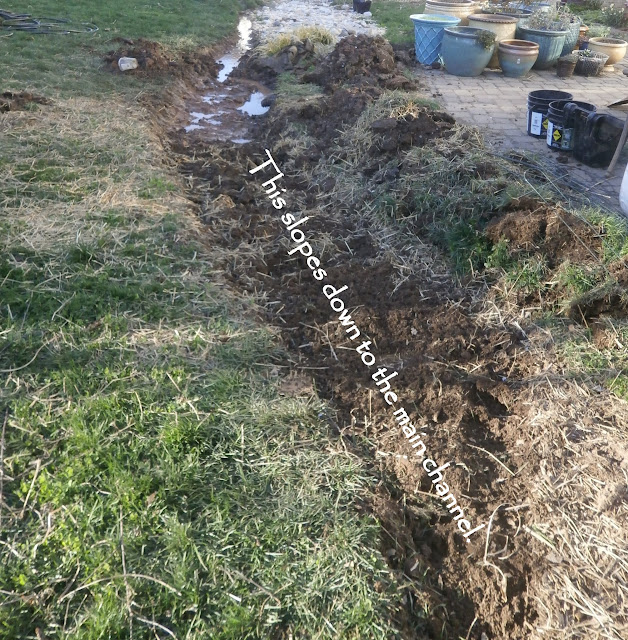 Extended by over thirteen feet, the riverbed now connects both sides of my garden. I graded the top of the new extension so the water flows towards the main channel and into the the rain garden. 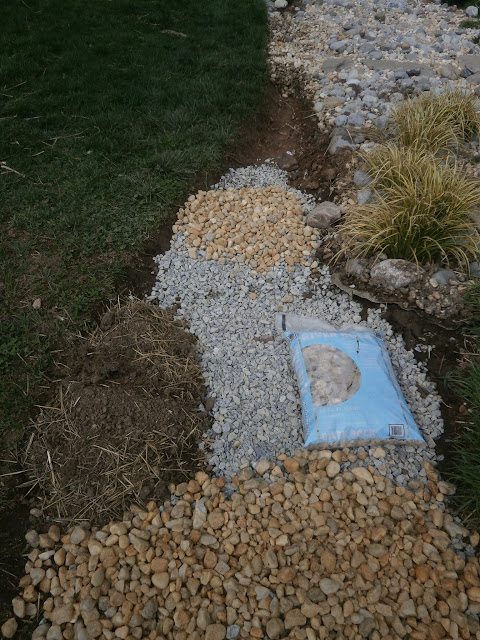 I filled the riverbed with cheap drainage rocks and pond stone. I created an island of soil so I could add more plants. 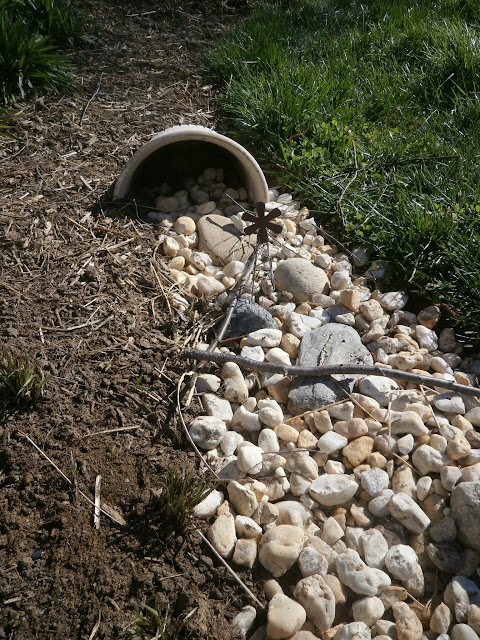 I broke a chipped urn in half and placed it at the mouth of the riverbed to look as if the entire rain garden had flowed from its depths. I'm sure to fool the masses with this clever ploy. 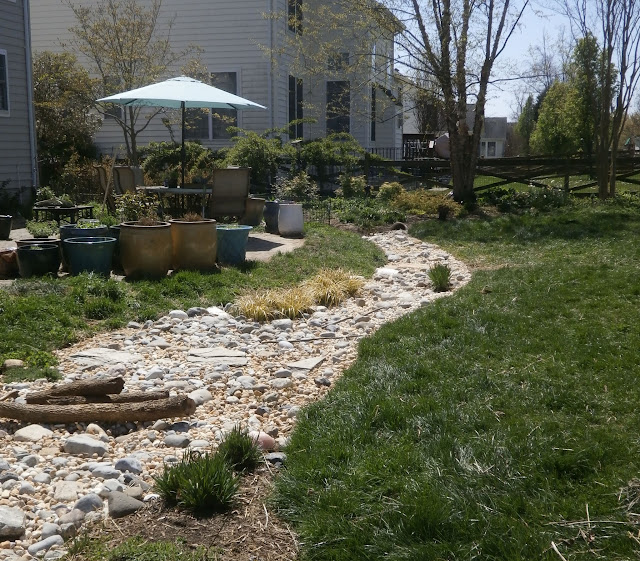 I added logs to the widest part of the riverbed because it seemed too rocky, a direct result of having been filled with rocks. Red lobelia cardinalis is planted amongst the logs. Golden eyed grass, dwarf pennisetum 'Burgundy Bunny', golden acorus, and iris have been added to soften the riverbed. I chose plants that would bend rather than break if mauled by four squirrel chasing dogs. 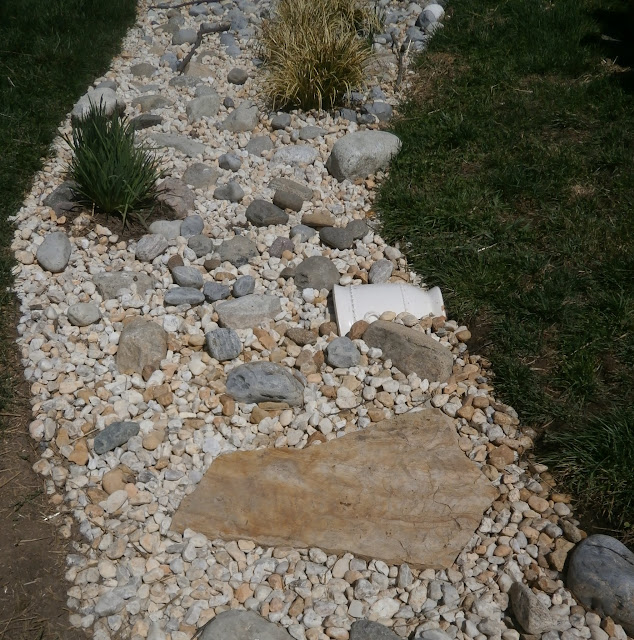 A large flagstone is used as a stepping stone and a piece of the urn covers the ugly drainage pipe. 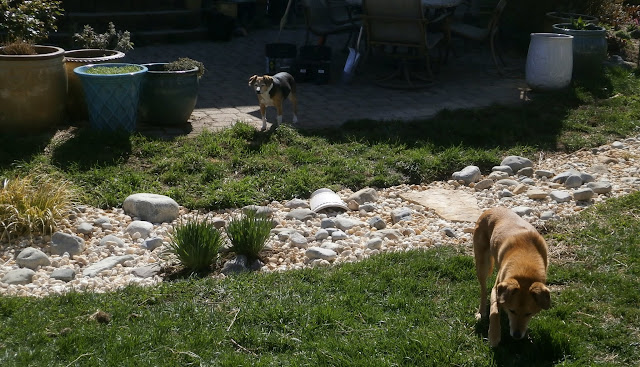 As for Scout, he has, yet again, safely made the river crossing to the green lawn beyond and all is well. This is the part of the post where you might want to clap and cheer, so go ahead. It will give your neighbors something to talk about.