Sometimes the heart just wants what it wants.  My garden is full of purchases made with logic and reason but occasionally gut burning desire takes over and I come home from the nursery with a plant or three purchased on a whim. This approach usually works well with annuals, but perennials? Not so much.

I've lost count of how many times I've killed centranthus, commonly known as Jupiter's Beard or red valerian. A lover of hot, fast draining spots, it grows wild in the rocky soil of California. Visits home would fuel my desire to stuff my garden with its glaucas leaves and coral pink flowers, despite my abundance of clumpy clay soil. Driven by the conviction that I could manipulate my garden to grow what I wanted as opposed to what it wanted, I amended the soil, plopped in the plants, and waited. They died, a slow taunting death that reminded me I was not in control. 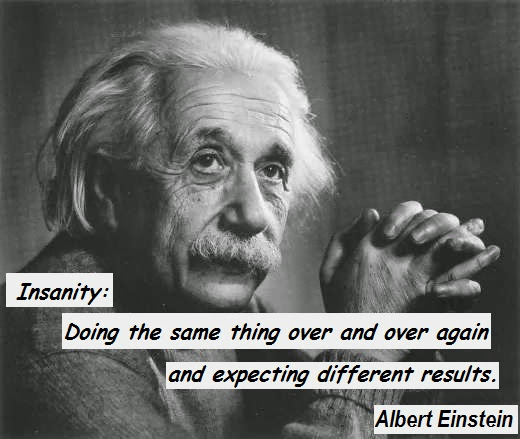 But a trip to England this summer and a picture of a massive patch of Jupiter's Beard growing in a friends Virginia garden rekindled my desire to try again. Outside of London, I whizzed past chunks of centranthus growing in rocky outcrops along the side of road embankments as I sat folded into the back of a friends 2 1/2 person Peugeot. While I should have been admiring the English countryside, all I could think of was the audacity of those damn plants to grow in a rock pile but die in my wonderfully amended soil. If they wanted a rock pile, I'd give them a rock pile. 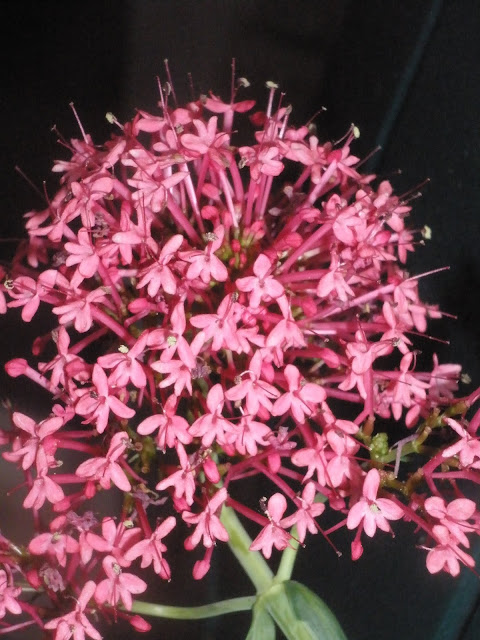 The large flower heads are made up of lots of tiny tubular flowers, making Jupiter's Beard attractive to pollinators. 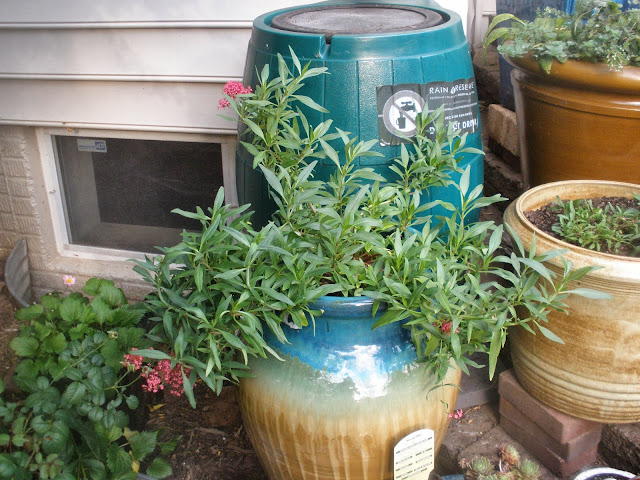 I moved this heavy urn from the top step to the bottom without killing myself. The urn is surrounded by plants waiting to be planted as part of my fall redesign. I'm waiting for rain so I can work the soil and an end to the government shutdown, which has furloughed my husband, so I can buy compost.

Except I didn't have a rock pile so I made one. I moved a mostly miserable 'Karley Rose' pennisetum out of this urn to a sunnier spot, stuffed the depleted soil with 10 cups of pea gravel, and planted a single centrathus. It grew. It flowered. I'm happy. 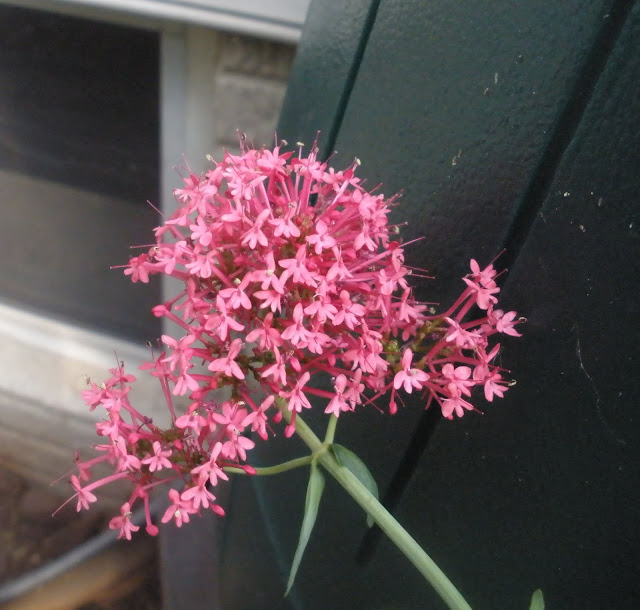 I've decided I'm not much of a vegetable gardener. With the exception of tomatoes, I choose my vegetables based on how much I enjoy eating them and the attractiveness of their foliage. I grew 'Sweet Chocolate' peppers in a pot surrounded by annuals and perennials, and imagined the purple-brown peppers as sweet accents to my garden design. Except I didn't grow a single purpleish brown pepper. What grew instead were red, heart shaped peppers that tasted like a pimento and don't match anything from the website where I purchased the seeds. But I've decided that's just fine. They're tasty. They're mysterious. I'm happy. 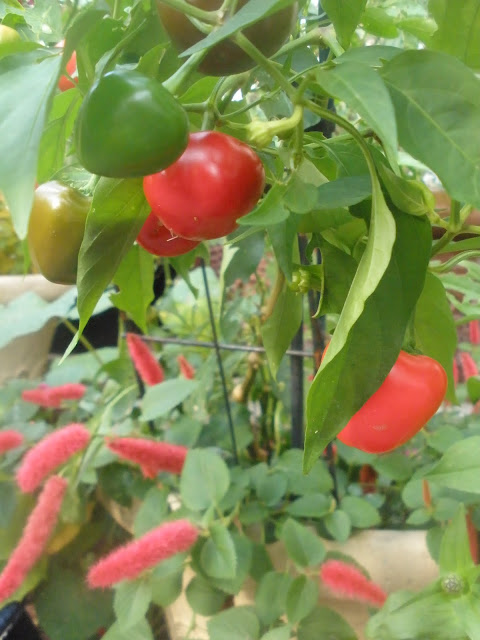 I am a calculated risk taker. Gamble away hard earned money on dice or cards? Oh, sweet Mother of God, no way. Start a garden club and invite total strangers to your house? Sure, no problem. So when I decided to move a 'Major Wheeler' honeysuckle out of a pot - because honeysuckle doesn't want to grow in a pot - and into the soil at the base of a massive trumpet creeper, it seemed like a good idea. I still think it's a good idea. 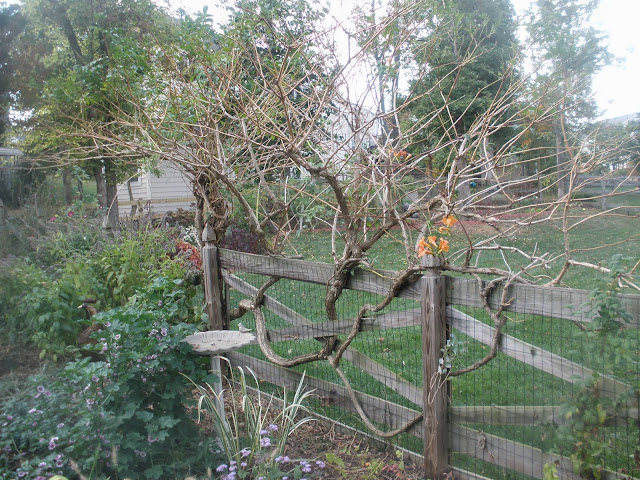 This is what my trumpet creeper looks like today. I'll prune out any weird branches this winter. My neighbors and I love this vine. It gives us both privacy, flowers, and hummingbirds. 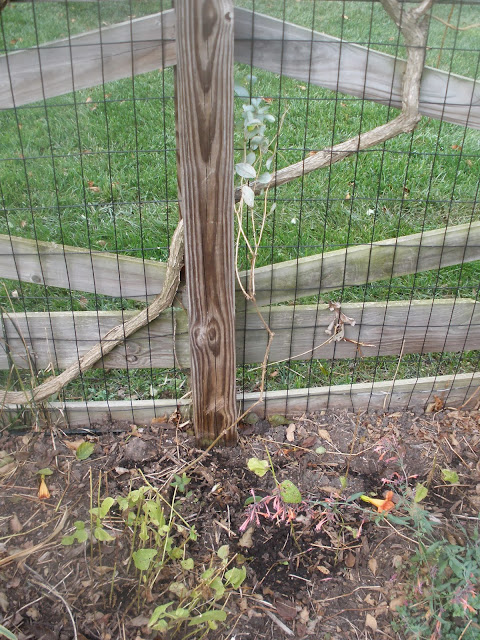 Ignore the mess at the bottom of the photo. I transplanted some sunshine starved blue mist flower seedlings into the spot in front of the honeysuckle vine. Despite their drama, they're doing just fine. I pruned the honeysuckle severely to remove any side branches and it's putting out new growth. I may prune a few more of  its branches to keep it from becoming a beast. 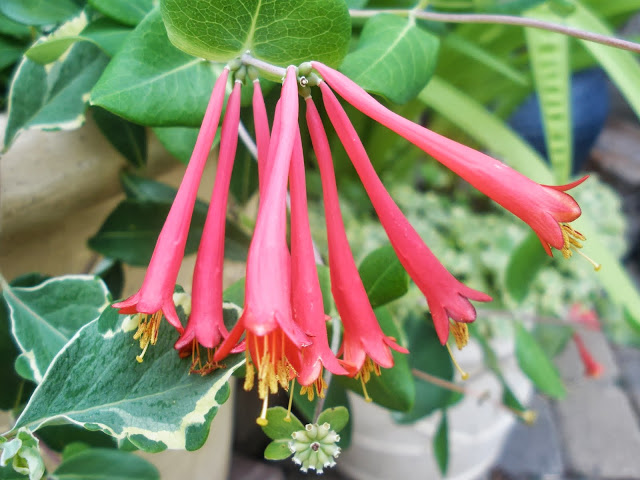 'Major Wheeler' honeysuckle
The variegated 'Harlequin' honeysuckle  pictured to the left was moved to a shadier spot. 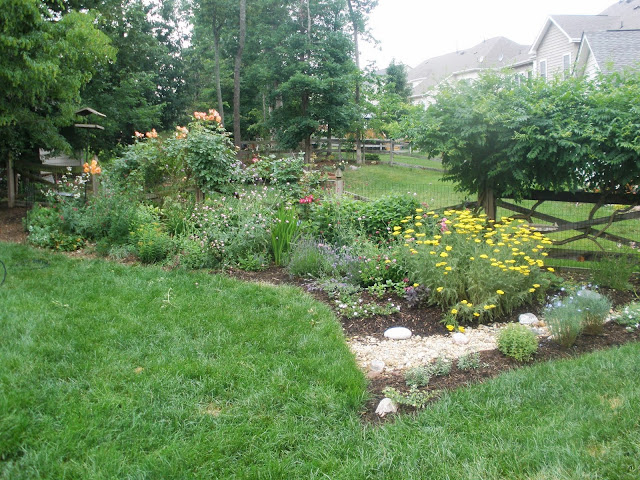 This picture of the trumpet creeper was taken in early June. The rain garden has been extended significantly and the surrounding beds enlarged. I am in the process of redesigning most of this bed. By the end of summer, the bed was seriously cramped, a few plants had died from all the rain in June and July, and several plants needed either more shade or more sun.

The trumpet creeper loses its leaves at the first hint of cool weather, leaving a Medusa shaped mess hulking over my fence. The honeysuckle, in theory and after regular pruning, will grow through its branches and continue to provide interest and privacy until winter hits. I'm hoping the smaller flared flowers of  'Major Wheeler' will contrast pleasantly with the the trumpet creeper. It's transplanted. It's growing. I'm happy. 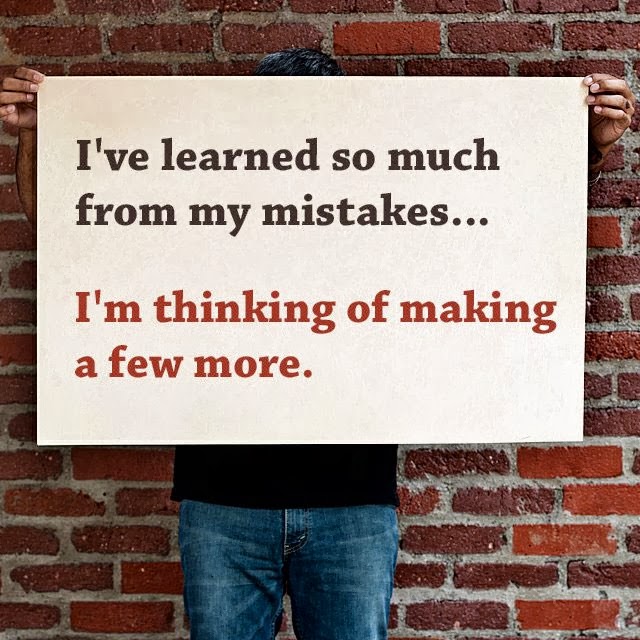