Tough Plants for an Easy Garden

I recently read an article that described a plant I've grown for years as obscure, unappreciated, and hard to find. Purchased locally and added to my garden years ago, stachys hummelo has been a stalwart performer since I plopped it into the ground. While I wasn't sure I agreed with the author, the article made me wonder what else I grow that could be considered unusual or obscure. Considering my unwillingness to pay big bucks for plants, the list is probably rather short. Listed below are plants I love that I often don't see in other gardens. I hyper linked their names to the nurseries where I bought them. 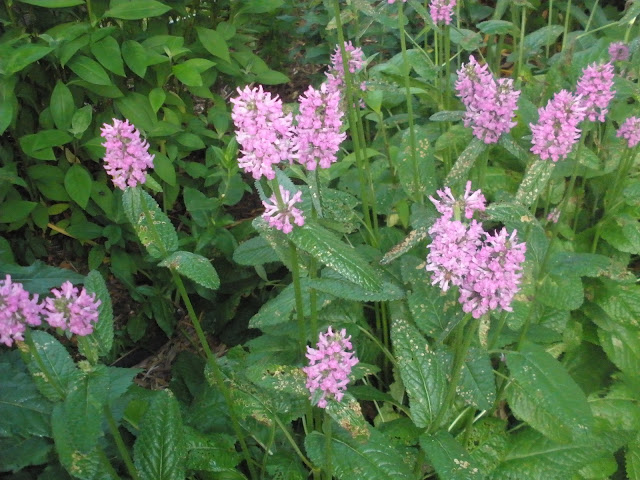 I completely redesigned the bed my stachys hummelo grows in. But they were so happy, I left them alone.
Bowman's Root {Gillenia trifoliata (Porteranthus)} 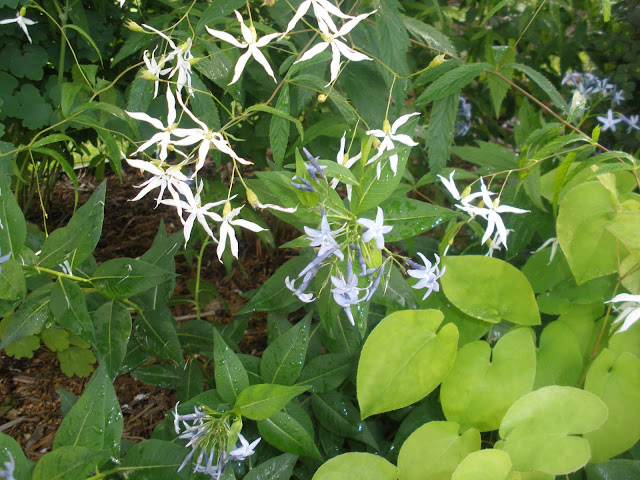 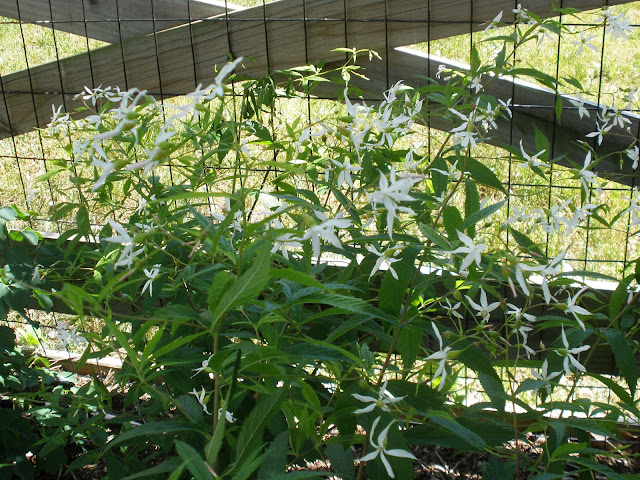 After the Bowman's root is done blooming, I cut it back by half to thicken it up.
Native to the east coast, Bowman's Root thrives in dry partial shade, and grows to 3 feet tall. White starry flowers open in late spring, while the serrated foliage makes an excellent background for summer bloomers. It's one of the toughest and easiest to grow plants in my garden. It doesn't attract wildlife, but it does attract me, and sometimes that's good enough. 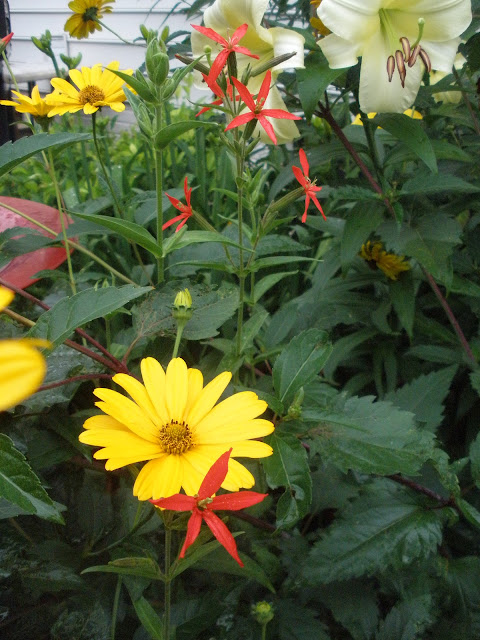 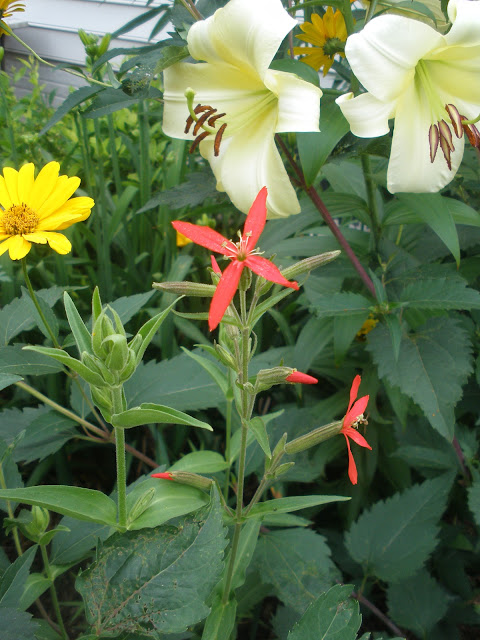 Silene regia is a beautiful, easy plant to grow. With a native range from Florida to Illinois, it's adapted well to my zone 7A northern Virginia garden. The first year after planting, it spent all summer shaded by neighboring perennials and didn't do much. But after a bit of rearranging to give it more light, it took off. It's a true hummingbird magnet, which is why I planted it. They grow 3 to 4 ft tall. 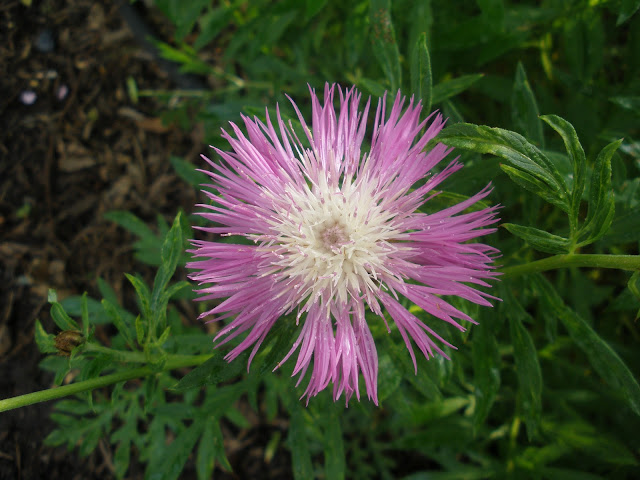 I love the feathery flowers. 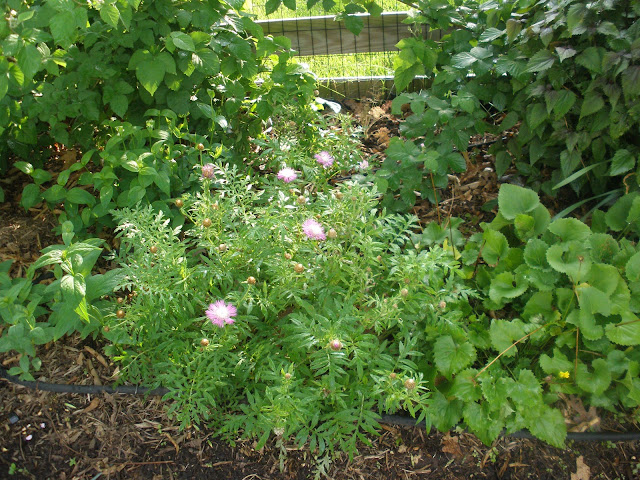 Part of this bed was also redesigned and the cornflowers were moved to a sunnier spot. This picture was taken in late spring before the crepe myrtle had leafed out completely.
My first introduction to Persian Cornflower was outside a grocery store in upstate NY. Sold in small square pots for $4 a piece, I designed and filled my front garden based on their weekly offerings. It sails through my hot, humid summers as effortlessly as it survived long, snowy winters. It likes moist, well draining soil, which seems like such an oxymoronic requirement. Very few places in my garden meet those standards but regardless of where I plant it, it grows.


Bush Honeysuckle  (Diervilla lonicera)
I purchased my diervilla from Prairie Moon but they're sold out so I linked this to Bluestone Perennials. 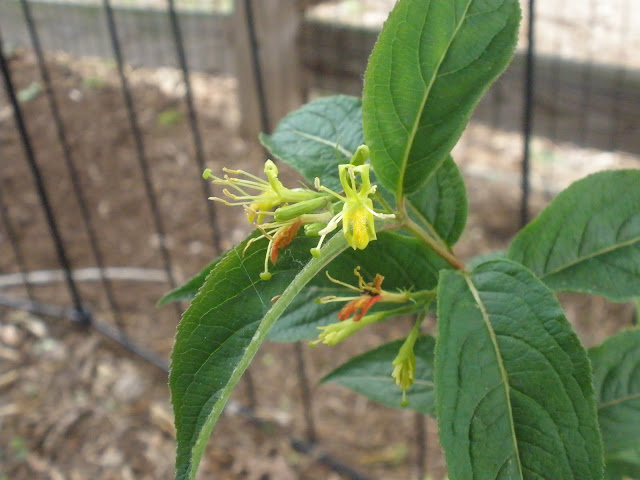 This summer will only be the second summer I've had bush honeysuckle in the garden, but I'm already in love with it. It takes dry shade, clay soil, and is tough as nails. In late spring pale yellow honeysuckle shaped flowers bloom at the end of the branches, nourishing butterflies and hummingbirds alike. Diervilla lonicera is native from Georigia through the northeast and mid-Atlantic and grows to 3 ft tall. 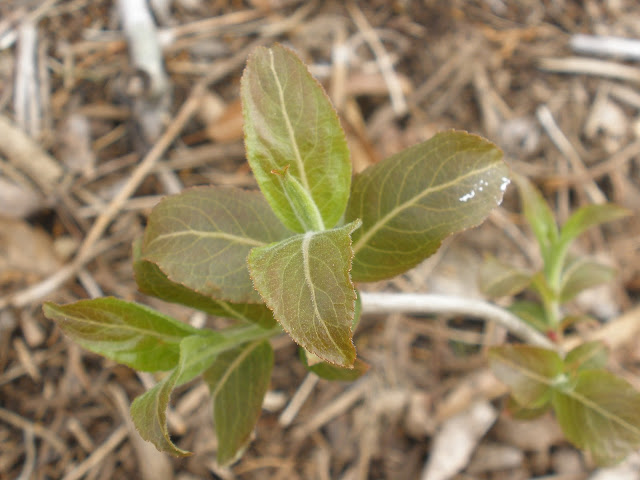 Diervilla rivularis is just like diervilla lonicera, except it's a lot bigger. Mine is still just a stick, but it's a tough little stick that was covered in dark green foliage all summer. Both types of diervilla develop fall color.

What plants do you grow in your garden that I might not have heard of? I'd love to know!
Posted by Casa Mariposa