I recently wrote a post describing a few plants from last summer's garden as either hits, misses, or maybe's. The hits grew effortlessly while the misses either died or drove me crazy. But the real frustration lie with the maybe's. They hadn't died or harbored leaf sucking insects, but had managed to frustrate me all summer with their odd growth or slack stems. The dahlias were the worst offenders.

Planted in a deep pot with the promise of perfect fall flowers, they sprouted lush foliage that was quickly devoured by slugs and thick green stems that were felled by borers before finally collapsing in a storm onto a pot of Louisiana iris. But the plant continued to grow and sideways upside down flowers bloomed last fall. They were beautiful even if the plant was a total mess. In my typical decisive fashion, I decided not to grow them this summer with the caveat that if I missed them, I'd try them again. But if I didn't, I wouldn't.

But the more I scrolled through the pictures of their flowers, the more I began to miss them. I rarely see them in local markets and cut flowers here are always overpriced. Hadn't they grown easily? Plus, my slugs are cheap drunks easily sated by a sippy cup of screw top beer. Thoughts of fall dahlias began to seep through my work days, soaking my overflowing, exhausted brain with puddles of optimism. Maybe I'd give it one more try.

But maybe I wouldn't. I over analyzed and argued with myself all week until finally listening to the one voice that shouted louder than the rest: "Holy crap! Just stick the damn things in a pot, tie 'em to a stake, water in some nematodes, and buy a pack of cheap beer. Yeah, they might suck, but they also might not. They might be awesome! Geez!" So I ordered a dahlia. I'm excited already! 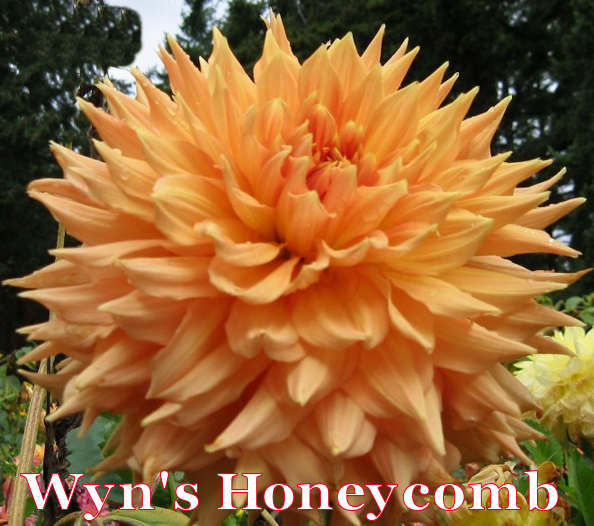 Wynne's Dahlias is a family owned business in Washington state that specializes in giant dahlias. Honeycomb is advertised as having "really strong stems" and deep golden bronze flowers. To order a dahlia you print out an order form and mail them a check. Very old school!
Posted by Casa Mariposa