What do you do when you really want a pond but don't have the space, sunlight, or budget required to create one? You grab a shovel and a muck bucket and start digging!
This past spring I was determined to create a container pond on my patio. I imagined an enormous pot planted with iris and water lilies and filled with croaking, peeping frogs. A few mosquito fish would dart between the lily stems while frogs lounged on their pads. All would be well until the water froze, the container cracked, and everything died. My desire for the pond was overshadowed by the reality that I had no way to hook it up to a filter or pump and short of creating a customized igloo to help the winterize container, couldn't guarantee it would make it through the winter. Creating an in-ground pond was the ideal solution, but I didn't have any available garden space and no room in my budget for everything a pond project requires.

To further complicate matters, one of my dogs is so low to the ground, I was genuinely worried that if she fell in the pond, she wouldn't be able to get back out. I should have given up, but that is not my way. Once I fall in love with an idea, it sticks, churning through my mind like the spin cycle in a dryer. Honestly, I drive myself crazy!

Inspiration arrived through a simple sentence in one of Sweetbay's posts about her garden. Happily tucked into the dirt near one of her horse's water troughs was a 2 ft by 2 ft puddle packed with frogs. A puddle? Hot damn! I don't need a pond! All I gotta do is dig out a puddle!!

The solution came in the form of a giant ring of shasta daisies that desperately needed to be divided. If I could use the extra space from a severely thinned patch of daisies to sink my container into the ground, I could have a frog pond! The spot available matched my budget - small, dry, and lumpy. The daisies grew at the edge of a dry, uneven bed under the shade of several large ash trees, a skinny cedar, and a small hornbeam tree. Overgrown with miserable coneflower and rudbeckia seedlings, self-seeded wine cups, and a few tenacious weeds, it was a mish-mash of plants growing sideways in the wrong spot, fighting for air under a mat of invading foliage, or lying prostrate on the mulch desperate for sun. In southern slang - It was a hot mess, honey! Digging it all up, redesigning the bed, and creating a frog pond was easier than committing to a 12-step program for gardeners suckered in by seedlings.

Here's how I did it: 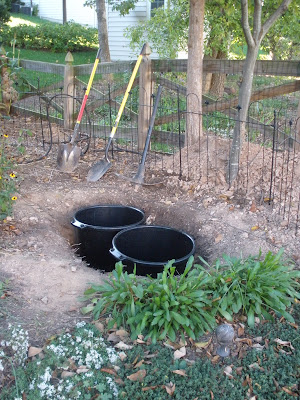 I dug up all the plants in the area and thinned out the daisies. I started digging the hole with a shovel but despite a ton of rain, the ground was so hard and dry my son finished the job with a pick axe. The extra dirt was piled up in the dog run until we had time to smooth it out and remulch the run. 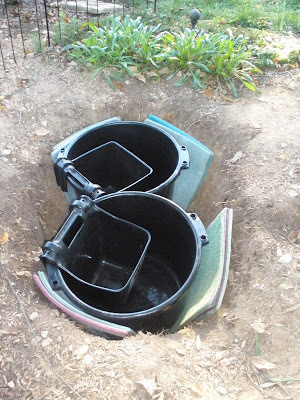 We dug deep enough to line the hole with carpet squares, which act as an insulator. The muck buckets are $18 70 qt shatter resistant tubs I bought at a farm store. These will hold up to invading tree roots much better than a fabric liner. Because we were working with a small space, the buckets worked a lot better than a preformed pond liner. They were also exponentially cheaper. 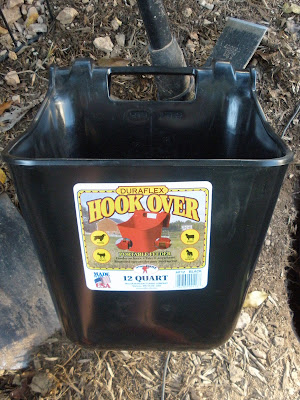 I used two feed scoops to hold the aquatic plants that needed moist roots and sun. I filled them with rocks and used the rocks to balance the little pots under water. They also act as a "shallow end" for the frogs who don't like a steep grade. The scoops were $14. 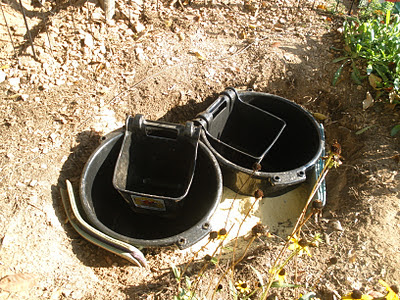 I filled the area between the clay and the buckets with playground sand. This creates a hibernaculum for the frogs. 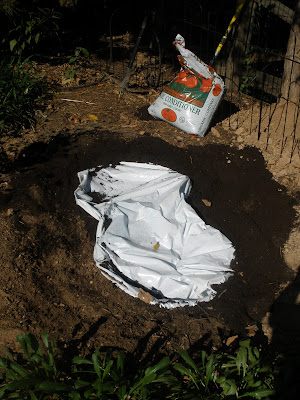 I filled in the remaining space with my favorite compost, Leaf Gro. I covered the buckets with plastic to minimize the amount of compost that fell in the water. 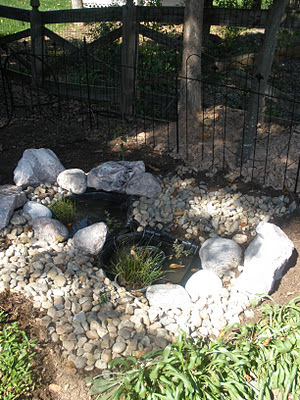 This picture is way too bright and doesn't show how pretty the rocks surrounding the pond are. I used a combination of pink quartz and tumbled boulders enhanced with cheap pond rocks from Lowe's to make the pond look more natural. I accidentally chopped the Invisible Fence line in half while digging. Oops! 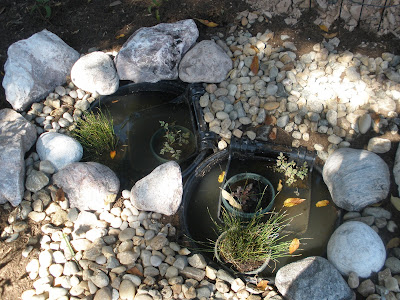 I took these pictures right after filling the pond with water from my rain barrels. The debris settled after a few days and the water is much clearer. Frogs prefer a bit of shade and debris. It gives them somewhere to hide. I added dwarf horse rush, a cardinal lobelia, and water celery to the pond. I bought them all for $3 a piece on clearance! Hornwort acts as an oxygenator below the surface. 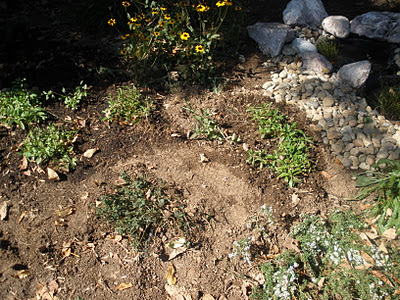 I completely redesigned the beds around the pond. Lots of veronica, oregano,aster 'Snow Flurry' and 'Deam's' rudbeckia fulgida grow near the pond. 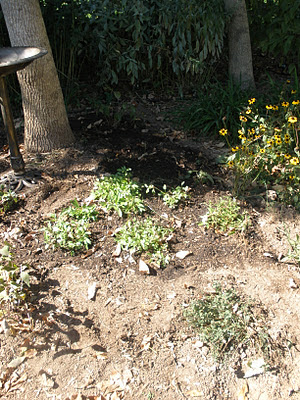 These pictures are also way too bright! Diervilla lonicera grows between the veronica 'Romiley's Purple' and the phlox in the background. It's hard to see in this picture. It's still pretty small. We had 20 inches of rain in September and the phlox is moldy. 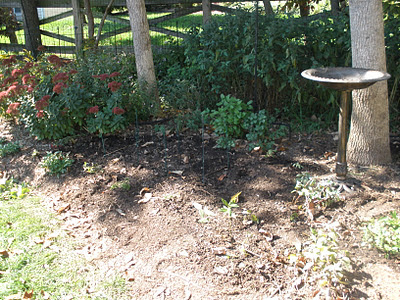 This section of the bed was also a wreck. I took everything out between the grass and the monarda. The area where the monarda are planted is moister and is supplemented by a soaker hose. I added veronica 'Sun Queen' in front of the monarda, a sedum seedling in front of the birdbath, amsonia 'Blue Ice', and lots of bare root porteranthus. Dracocephalum (False Dragon's Head), a super tough drought resistant perennial, is planted between the bare root porteranthus and the grass. The bare root plants are marked with green bamboo stakes.
I haven't seen any frogs in the pond yet, but a friend with a PhD in Biology assured me they'd come. I hired a neighborhood boy to go frog catching for me at a local lake, but he couldn't find any. I wasn't too surprised. There is so much fertilizer run off in our creek that the oxygen levels are too low to sustain much aquatic life. It's a nasty, algae covered disaster and if I were a frog, I wouldn't live there, either. But I'm hoping they like my pond. I built it just for them!!
Posted by Casa Mariposa