When my days are done I will not go down in the annals of history. I will not have cured cancer, brought peace to the middle east, or stopped global warming. I reconciled myself a long time ago to living life on a much smaller scale. The universe I affected was limited to my home and family, circle of friends, and students and colleagues at school. 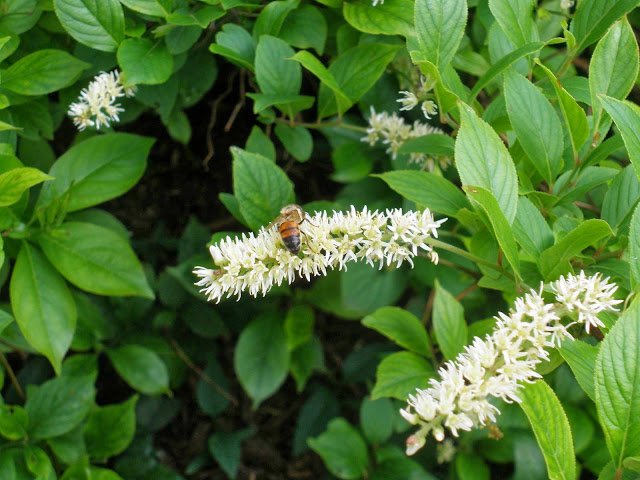 I began to garden almost 16 years ago. Tired of the bare, scrubby yard of our military base house, I longed for color and a diversion from being a young mother home with a two year old all day. I wanted to garden as organically as possible, but aside from tilling cut grass into the vegetable garden and burning my plants with manure, I didn't know how. I accepted the necessity of chemicals as readily as gloves on a cold day. The organic offerings at our base exchange or local Wal-Mart were slim to none, so I chose what looked the least ominous and hoped for the best.

As my gardens grew larger and my skills deepened, my perspective changed and I began to see my garden as a habitat, whole and encompassing. It wasn't just a collection of pretty flowers and a bird bath, but home to the bluebirds who nested in the same spot every year, generations of butterflies, and a pit stop for migratory birds. My world was suddenly larger and my choices had become littleHUGE. Choosing to fertilize the lawn or gardens with chemicals or organics was a little decision, but the impact was huge. 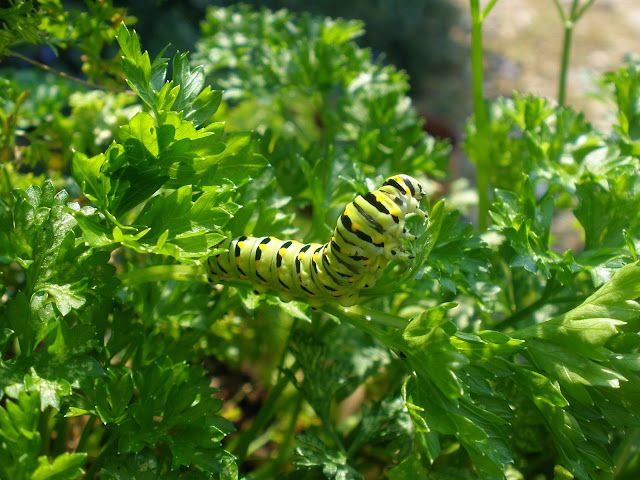 A swallowtail butterfly caterpillar munches away on the curly parsley.

Some of the decisions I made were so small, I can't remember making them. The extra curly parsley fed dozens of caterpillars, the bronze fennel hosted leigons of beneficial insects, and the rose of sharon, freed from the pesticide used to control japanese beetles, sang with life, it's boughs heavy with song birds and blossoms bursting with bees. Of all those decisions, only the choice to replace the pesticide with milky spore was significant. The others evaporated as quickly as they formed, leaving only a cognitive shadow to remind me of my plans. 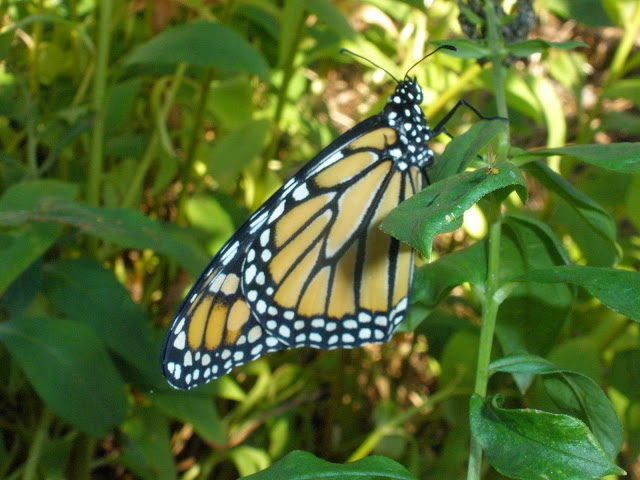 A monarch fresh from its chrysalis rests on the phlox.

As my garden became more organic, the impact of littleHUGE sang, flapped, fluttered, and hopped in front of me daily.  Seeing the garden as an ecosystem that lived or died based on little decisions I made was transformative. According to the US Fish and Wildlife Service, an estimated 67 million birds a year die from pesticide contamination by eating poisoned insects. The weight of this information was overpowering and I refused to be a contributor. I couldn't save 67 million birds, but I could create a haven for those who stopped by. I could simply be as littleHUGE as possible.
Posted by Casa Mariposa