Have you ever heard of thundersnow? Last night a crazy storm blew through the mid-Atlantic, icing roads and hurling wads of wet, heavy snow during rush hour. Rain turned to ice before snow, mixed with thunder and lighting, brought our area to a complete halt. My husbands normal one hour commute turned into a five hour trek, complete with a stop to push someone up a hill and drive home a stranded couple who didn't want to spend the night in their car. What a mess!!

I was hoping to take some photos of beautiful snow laden trees dripping crystalline icicles from their branches. That's not quite the way it worked out. 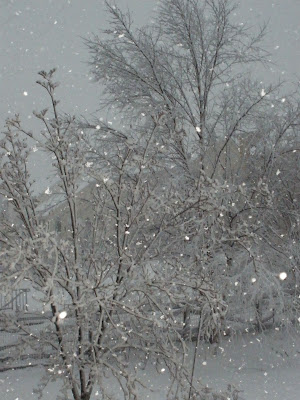 I took this picture of my dogwood and river birch at the beginning of the storm. The white blobs in the picture are falling snow.

While keeping an eye on the clock and the news, waiting for my husband to make it home safely, I paused to check on my garden. The shrubs in my front and back yard and along the side of the house arched towards the ground, their branches almost bent in half. I could hear the snap of trees breaking in the distance, their limbs heavy with snow. Armed with my favorite snow-blasting, tree-saving tool, a large broom, I headed out.

The dogwood during the storm. 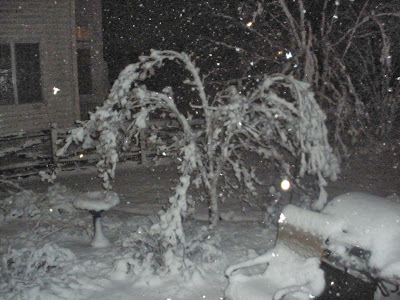 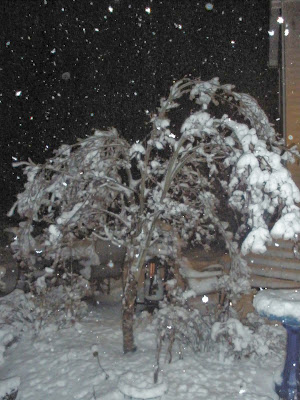 The branches of the river birch were close to breaking. I brought the broom up under the branches to release the snow. If you whack the branches from the top, you might just break them off. 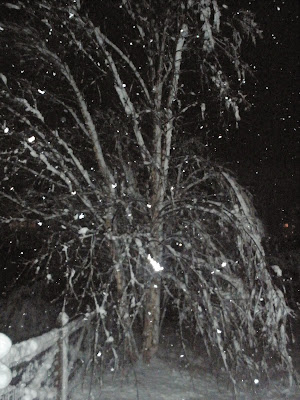 Heavy, wet snow and ice can be incredibly destructive to trees and shrubs. It's better to take a proactive approach and shake the snow off in the middle of a storm than to try and save them the next day. I had to relandscape our front yard about six years ago after a devastating ice storm broke the shrubs in half. It was frustrating and expensive! 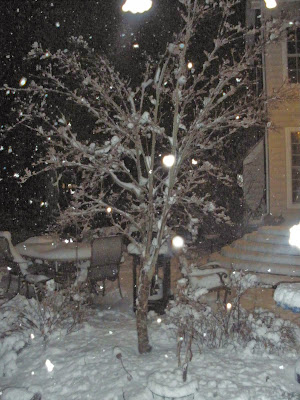 After snow removal from the UltraBroom 2000, a  much happier dogwood, with all of its branches intact.
Posted by Casa Mariposa