The Rest of the Problem....

Just the other day I wrote about the constant wilting of my Endless Summer hydrangeas, regardless of whether they needed water or not. Given morning sun and afternoon shade, they should have been happy. While they grew fairly large and lush, given the cramped space I had put them in, they only bloomed pink instead of blue and rarely bloomed at all. They wilted every morning and spent each afternoon recovering.

Through reader feedback and some research, I figured a few things out: 1) the concrete foundation was leaching lime into the soil, causing the soil to become slightly alkaline, therefore giving me pink flowers and 2) cramped hydrangeas don't bloom well. But there was something else that kept bothering me. The leaves directly in front of our large bay window suffered the most wilting. The leaves in front of the side windows, which are covered by lined curtains I keep closed to keep the house cool and those shaded by the giant viburnum, barely wilted at all. 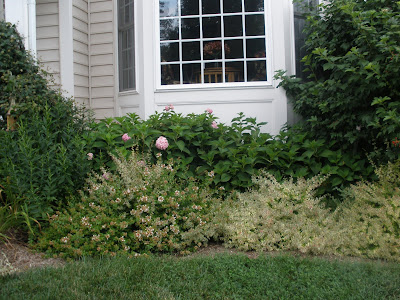 This picture was taken in late afternoon on an overcast day. By this time, the hydrangeas had recovered from their daily wilt and looked fine. The abelia closest to the obedient plants always develops its varigation later than the other two.
Being a science teacher, I knew there was a rational explanation for this but it seemed elusive and I was growing frustrated. So I did what I teach my students to do during every lab we conduct: I went outside and observed the shrubs, looking for obvious clues and then using those to help me decipher the problem. I'm sure to my neighbors, I just looked like I was pacing in front of my shrubs, mutering to myself. That's ok. They're used to it!!

My favorite part of sudden discoveries is the feeling of every part finally sliding into place to create a finished whole. My windows are treated with reflective film to help keep the house cool. Because the largest part of the bay window isn't covered by a lined curtain and has greater surface area than the side windows, the amount of infrared light that is reflected back into the garden is much greater. Infrared light is felt as heat by plants and people. I had created a heat island between the clematis and viburnum, which caused the hydranegas to wilt every day, even when the temps were mild. Once I had figured out the problem, it had a simple solution - pull out the hydrangeas and replace them with something that can take hot temps.

One hydrangea is headed for the back garden into a long bed that is being completely redesigned and replanted this fall. The other two are being given to a wonderful friend with a massive garden. In their place I'm putting two 'Froebel' spireas. It's hard to find a shrub tougher than a spirea and they can take most of whatever Mother Nature dishes out. The hot pink blooms will brighten up my blah beige siding and their foliage will complement the other plantings in the front garden. 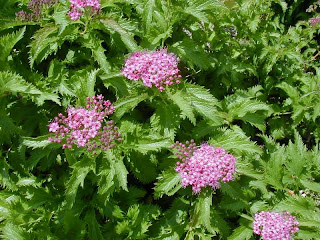 Froebel spirea has pink flowers and beautiful reddish fall foliage. It does well in high heat, clay soil and both mildly alkaline to mildly acidic soil.
Photo from http://www.mobot.org/gardeninghelp/image.asp?image=C347-0628050cs.jpg
Posted by Casa Mariposa