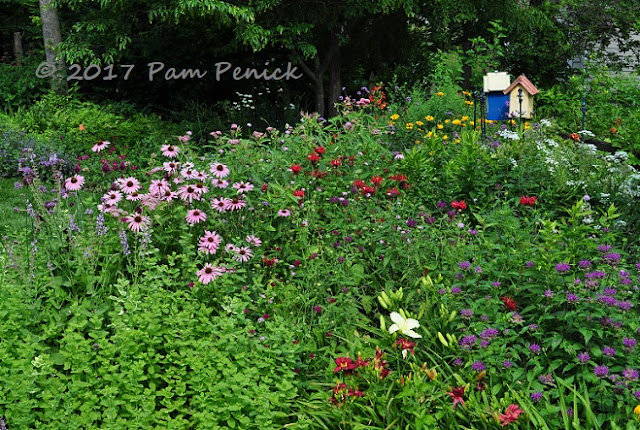 Part of my pollinator garden
Photo by Pam Penick


It's no small thing to plan a Garden Bloggers Fling, to invite 90 people over to see your garden and organize a three and a half day event while working full time. It took three years. Life kept getting in the way and the task was monumental.

It was my own Mt Everest. 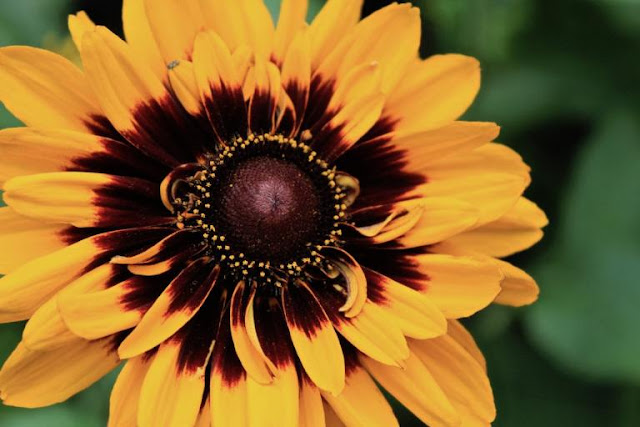 
I spent two years analyzing my garden and redesigning the weak spots only to redesign them again and again. I wanted everything to be perfect or as close to perfect as I could hope for. But that didn't happen. 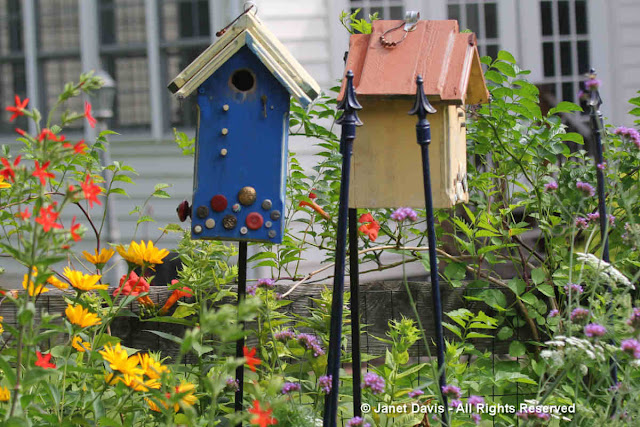 I love buttons and birdhouses so I had to have these!
Photo by Janet Davis


The dogs' pee burned yellow circles into the grass and a few of my annuals took their damn sweet time growing large and lush. 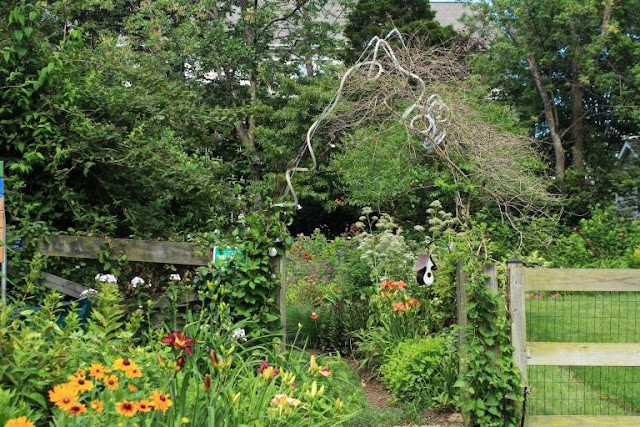 I had hoped the metal rods and plastic tubing, which adds weightless surface area for the vines to grow on, as well as the dead wood, would be covered by the Fling. Photo by Diana Kirby


The Ugly Arbor, which had previously harbored an invasive but innocently purchased Japanese honeysuckle, was laid bare, the honeysuckle roots removed to stop its spread. I left the wood and started an annual vine from seed during December but that, too, wouldn't grow fast enough. Hops planted with the hope they'd scramble to the top in a mad dash fueled by fertilizer, climbed the sides with the languor of a lazy drunk. The arbor stood in contrast to the buffet of perennials at its feet, naked and thin, its secrets revealed. I cringed and sighed and walked away. 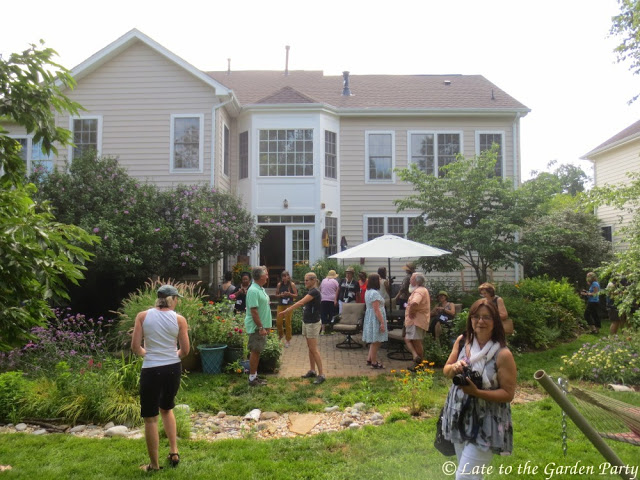 
Plants died and I replaced them just weeks before the event. Newly purchased shrubs bought the winter before succumbed to leaf blight and I mercilessly cut them down, replaced by 'Little Lime' hydrangea I was assured would thrive in my dry shade. I didn't care. As long as they were alive for the Fling, I was happy. I dug a hole and stuck them in. An important clematis was uncooperative and the anemones took over again. I couldn't find the ferns. 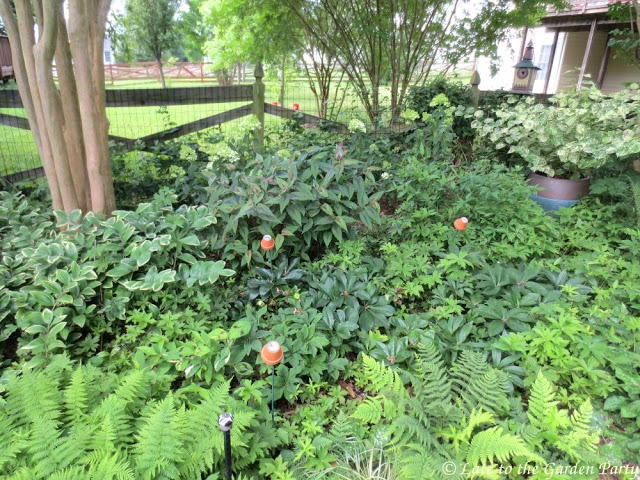 A search and rescue mission uncovered several ferns but there are still a few that are missing. Photo by Late to the Garden Party

In my frenzy and exhaustion, I gave up and decided it was all good enough. It was not perfect. I could not even begin to compete with the other professionally designed gardens on the tour so I just let go. 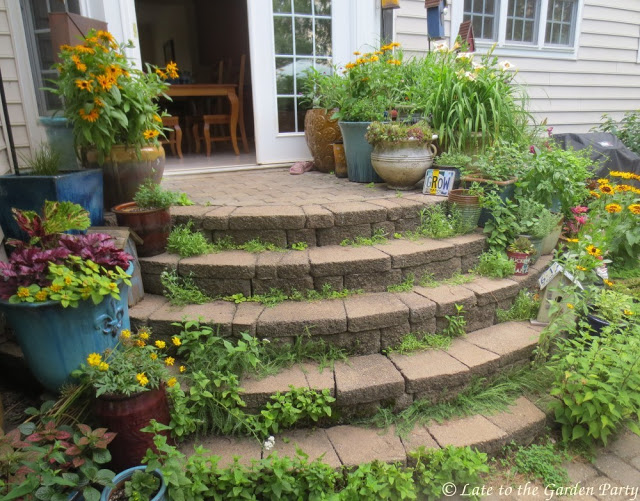 The back steps and part of my extensive container garden.
Photo by Late to the Garden Party

I had a beer and then another and thought. "F*ck it." Two days before the Fling, I ignored the garden and went to see one of my favorite bands, instead.


90 bloggers came to my house. They loved the Ugly Arbor and posted pictures of it on their blogs, while I cringed and sighed and looked away. They said it was whimsical and clever so I took a second look and agreed. No one stepped in any hidden dog poop or asked why the grass was dying. They took pictures of everything and told me how much they loved my garden. I smiled and believed them because I could see it on their faces. 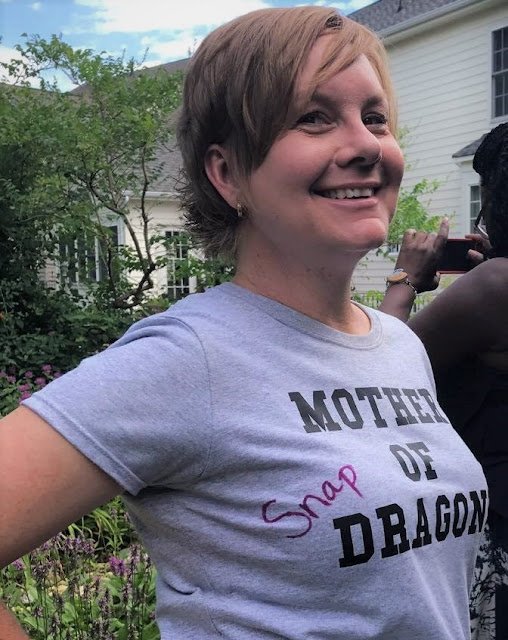 They took my picture and I cringed again when I saw how exhausted I was, my eyes mere slits in a puffy, sleep deprived face. Then I took a second look and saw pure joy at having done what I was told I couldn't do. So I just let go. Sometimes good enough is enough.