One step back, two steps forward

I missed you. It's that simple. I just missed you all. After my divorce and move to a new house, I put up a few posts to let you know I was still alive and up to my eyeballs in projects, as usual. But my desire to chronicle the changes fizzled out and I stopped blogging. I can be very open and very private at the same time and I simply didn't have anything I wanted to share, not even my garden.  I'd decided to keep my blog as a time capsule to a very different period in my life. 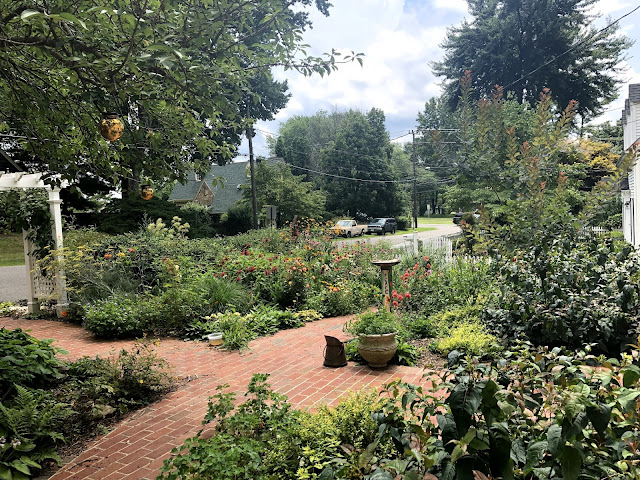 My front garden has two distinct areas thanks to a massive Japanese cherry tree. One side is shady while the other is sunny.

But after commenting on a post written by my friend Jason Kay of gardeninacity, I realized I missed the garden blogging community. So I'm back. 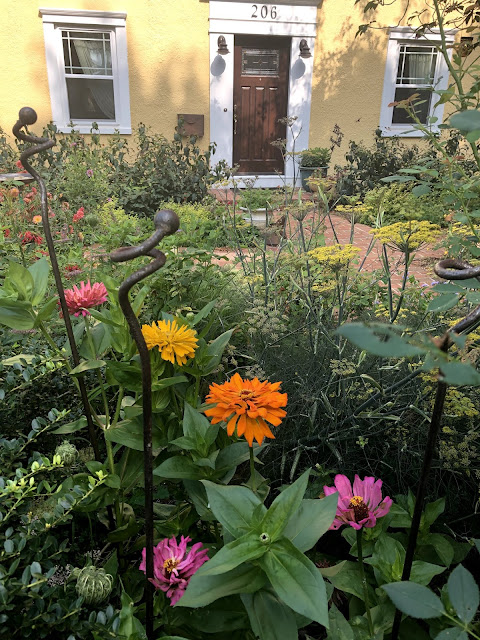 To keep the zinnias from toppling during storms, they're tied to metal stakes. 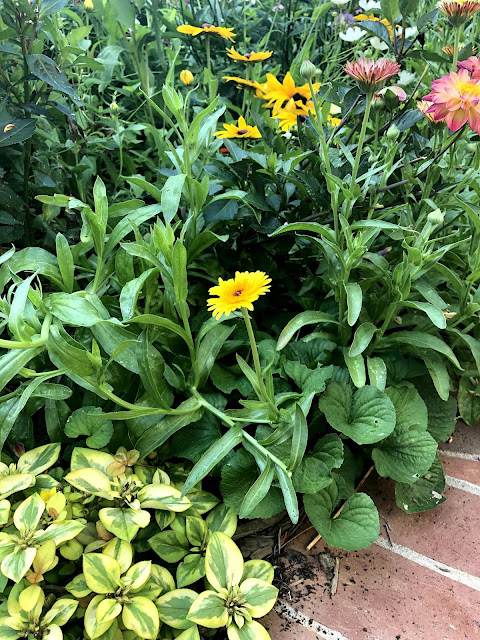 I tossed out the seeds for this calendula last winter. Native violets grow everywhere and squeeze out other plants. I pull some and I keep some. 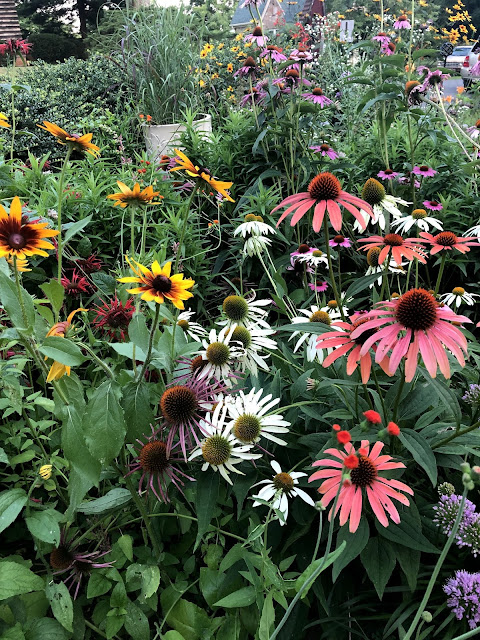 I removed all the grass from the front of my house and filled it with flowers.

My old garden is gone, removed with a backhoe so that grass and mulch could be laid for a giant playset by the new owners. I've never gone back to see the carnage and was given the news by a much loved neighbor. 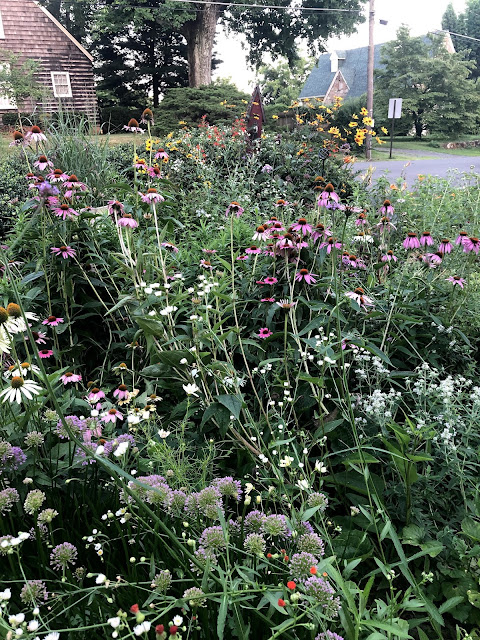 I knew that would happen, despite assurances from the new owners that they would keep the garden.  I miss my old garden but my new one suits me better. I spend a lot of time enjoying it and not much time maintaining it. Weeds cover ground not covered with mulch and I don't really care. Instead of worrying about perfect camera shots, I just go out with my phone and snap a few. 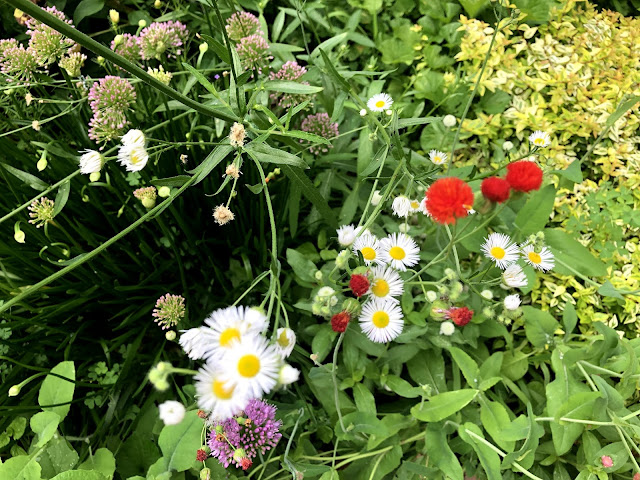 Whether these daisies are a weed or a wildflower is in the eyes of the beholder. They're cute so I let them stay. 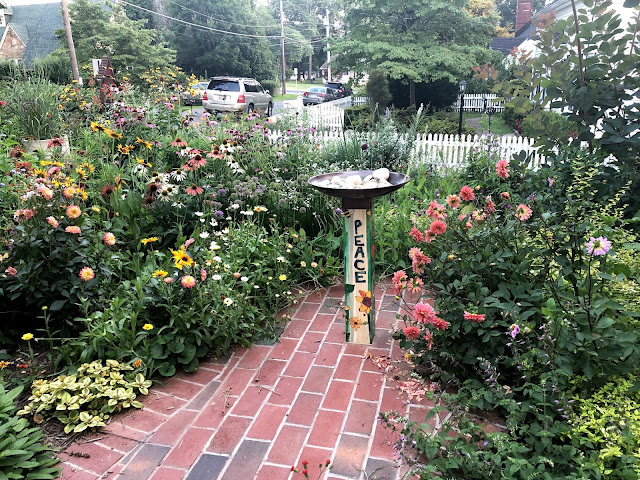 My new garden and home are happy, peaceful places. The front garden is lush and exuberant and true to the nature of the small town I moved to, total strangers often stop to comment. At first, I was suspicious but it's a welcome relief from the indifference and  expected conformity of the northern Virginia suburbs. 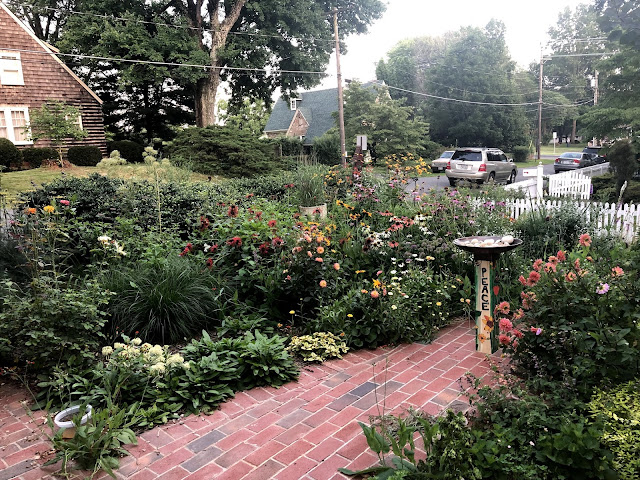 Many of these plants came from my other garden, except the dahlias, which I grow from seed every winter. 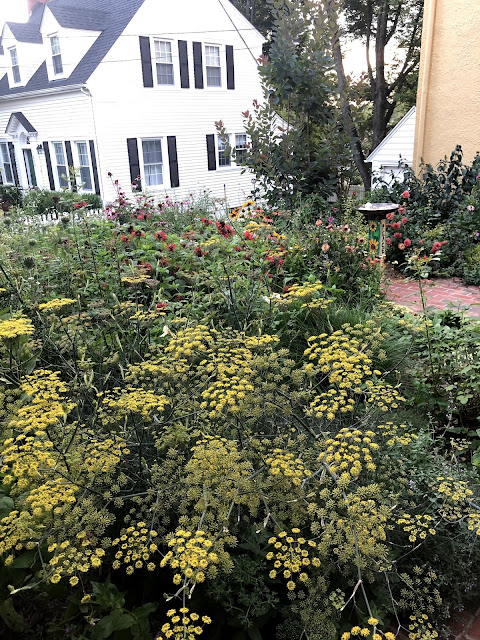 I've seen so few honeybees this summer and only a few swallowtails. But I've had about a dozen Swallowtail caterpillars in my fennel and currently have a new batch in some parsley. A smokebush shrub in the background is in its awkward teenage phase. I love its weirdness. 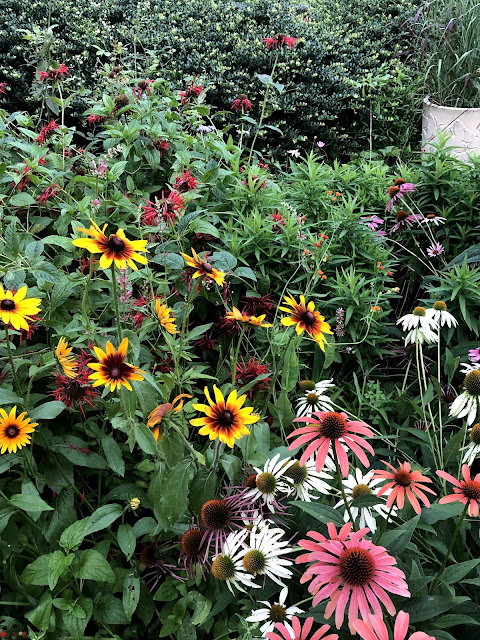 The rudbeckia hirta self-seeded last summer and were a surprise. I'm glad they're there. The multicolored coneflowers were grown from seed. 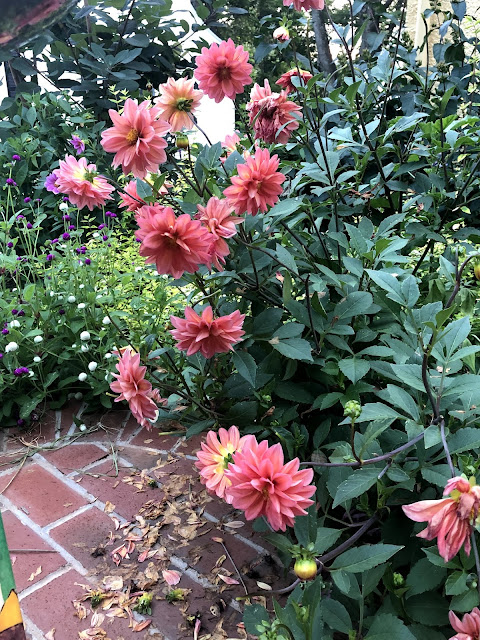 These seed grown dahlias are blocking the dwarf variegated abelia behind them but so what. They were supposed to be there temporarily until I found a better spot for them but I decided that spot was good enough and let them stay. I no longer care about having a picture perfect garden or about mastering design principles. I know how to create beautiful design. I just don't think it matters anymore. The dahlias are happy and I'm happy. That's enough. 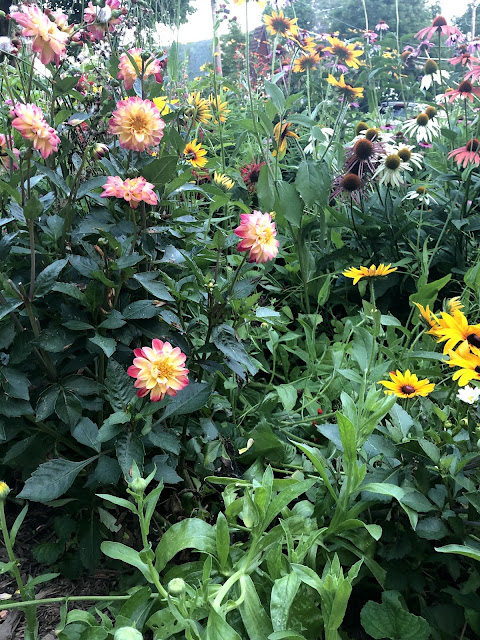 These dahlias stayed in the ground all winter. I think the tubers survived because they're close to the brick walkway, which creates heat and kept the soil warmer. I'm going to experiment by leaving all my dahlia tubers in the ground this winter to see what happens. I'll grow a few from seed again as backups. 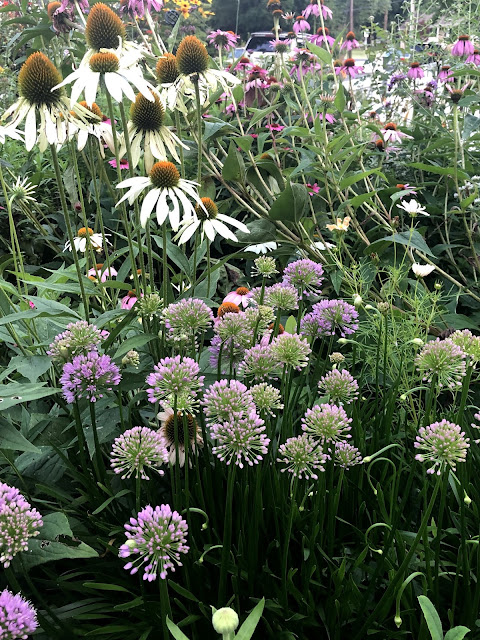 'Millennium' alliums from my previous garden 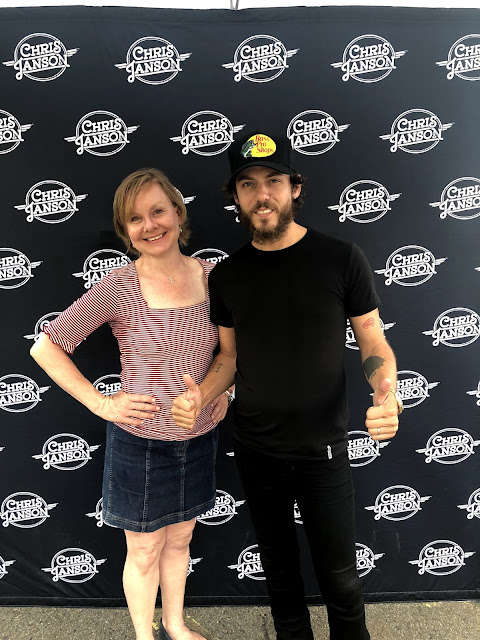 Here's a recent photo to prove I am very much alive. I'm a huge music lover so when a friend asked me at the last minute if I wanted his extra ticket to a local music festival, I said yes, even though I had no clue who was playing. The music didn't matter. I was in good company and knew we'd have a blast no matter who was on stage.

While he was getting autographs, I had my picture taken with Chris Janson. I had no idea what his name was until a few minutes before this picture was taken and not being much of a fan of country music, wasn't familiar with his songs. But he was a brilliant entertainer and musician and a few of his songs have become favorites.

So there ya go.