I don't have much experience growing dahlias, as in almost zero. But after spending the winter watching other bloggers post gorgeous pix of their dahlias, I decided to give one a try. Beautiful color pictures lined the shelves of our local garden center, each promising a dahlia more beautiful than the next. I grabbed a bag plump with promise and daydreamed of dahlias. 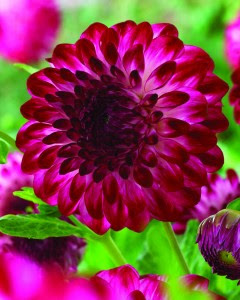 Dahlia 'Caproz Pizzaz'
picture taken from Squak Mt Nursery
The bag was labeled 'Caproz Pizza'. I should have known I was headed for trouble when I bought a flower named after a pizza!
They sprouted full and lush from spring rain and were promptly devoured by ravenous slugs. Armed with copper tape, I wrapped the plant in hopes of zapping the slugs as they made their nightly crawl towards my dahlias. The slugs were unfazed and the only thing I accomplished was making my plant look stupid. Perhaps the slugs would laugh themselves to death. 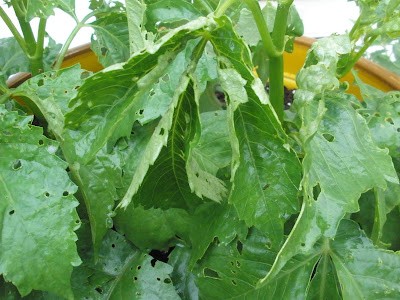 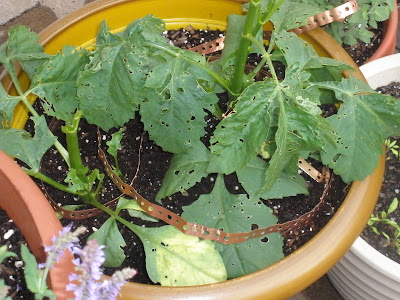 Highly ineffective copper tape
Even the salvia peeked over the edge of their pot to laugh at the dahlias. 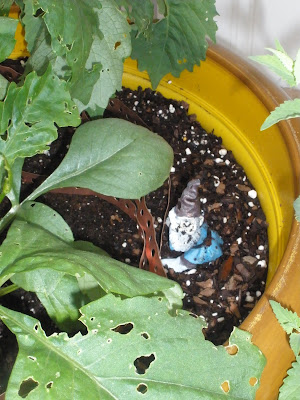 In an effort to boost the local economy, I hired this gnome to put the squeeze on some slugs. Instead, he hid behind the copper tape and silently cheered them on. Into the bird feeder with you, O Worthless One!!!
Did I try a beer trap? Of course I did! However, I began to worry that my slugs weren't drinkers. As a matter of fact, I began to worry they were complete tee-totalers. Night after night, my trap remained empty. Anxiety and panic began to set in. Maybe they weren't tee-totalers at all! Maybe they were waiting for an apple martini or a full bodied Merlot. Frustration snuck quickly in and I took a hard glance at my spineless foe. "Wait a minute", I thought. "Them ain't no high class slugs!" I dug through the cupboard grinning mischievously and then headed to the store. 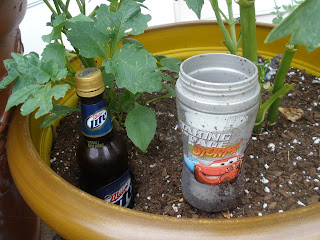 My slugs prefer their beer in a sippy cup! I'm thinkin' they started their habit mighty early... 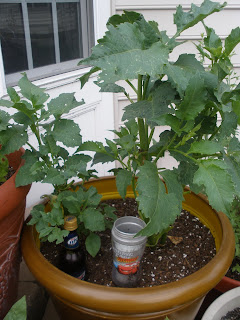 The cheaper the beer, the better. The slug death toll is almost 30 and rising. Drink up!!
But now, I am ashamed to say, I have met my match. It happens to all of us. The larvae of some dastardly creature has set up house in the stems of the dahlias. Using my highly scientific theory of "Just wait a bit and the good bugs will show up to eat the bad bugs", I waited. And waited. And waited. And while I waited, it munched, devouring my dahlias from the inside out, leaving piles of black frass to taunt me. It laughs at my beer, preferring well watered dahlia instead. 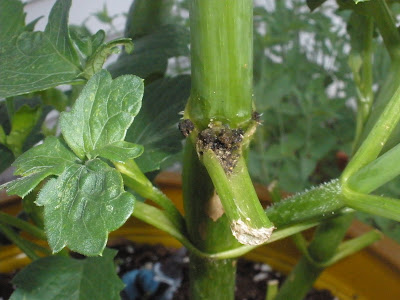 The little white worms bore holes through the stems, leaving piles of dry black frass to mark their entrance and exit routes. 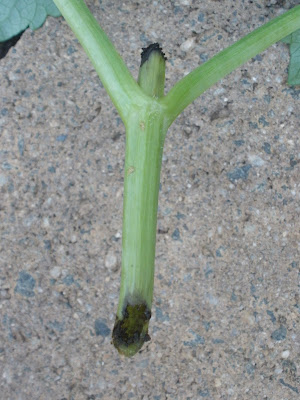 In one end and out the other! 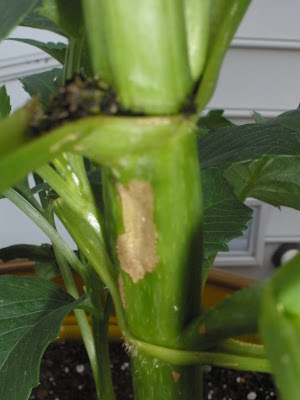 I noticed this spot this morning. It's eating the cell wall of the plant. 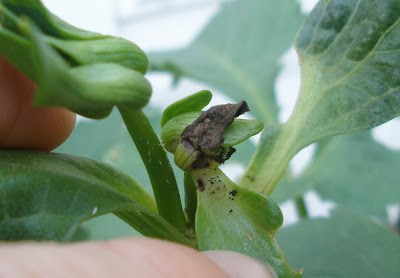 Now it's after the flowers. The battle has begun!!
Have you any idea who the culprit might be?
Posted by Casa Mariposa