Tums in the Tomatoes?

I was recently griping to a gardening friend about my rotten luck growing tomatoes in Virginia. When I grew them in a container, I struggled to keep them moist enough and they developed signs of calcium deficiency. That fall I found a rich, sunny spot in the garden, loaded the soil with a summers worth of crushed eggshells, and dreamt of tomatoes, fat and juicy, filling my wheelbarrow the following year. Fast forward ten months - in the epic battle of Tomato vs Trumpet Creeper, the trumpet creeper won and the Brandywine tomato plant was crushed to a lifeless pulp. My tomato loving husband drove despairingly to the grocery store and I stewed over what had gone wrong.

Annette listened patiently, as she always does, and then casually commented that her friend, who grew amazing tomatoes, always throws a few Tums into each hole when he plants them. I stopped, my hands frozen in mid-air, students papers suspended over my desk like stratus clouds in a thick, white sky, and stared. "Tums? He puts Tums in each hole? Like those little stomach pills?" Annette laughed, as she always does, and replied, "Yep! He just throws a few in. It gives them calcium all summer." 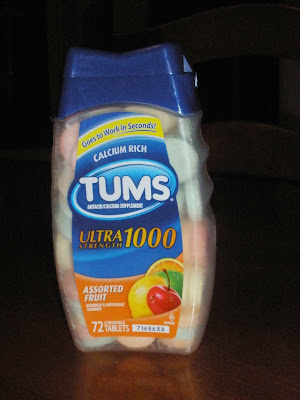 Once I had recovered from the brilliance of the Tums remedy, I began to wonder, what other folk remedies do gardeners use that no one knows about but them? Fer, author of the wonderful blog My Little Garden in Japan, recently posted about making a liquid banana fertilizer. For years I had used dried, pulverized banana peels in my garden but had never heard of mixing them with water. The potassium in bananas is water-soluable and only released to the plants when mixed with liquid. I wish I had known that years ago!

I've decided for this week's post to list the remedies I've created or discovered that have proven successful in my garden. But what I really want to know is, what remedies do you use? I've created a Blog Carnival at the bottom of this post for other bloggers to add their own bits of wisdom.

Several years ago after planting a Rutgers Hybrid Stellar Pink dogwood, we had one of the hottest, driest summers on record. Despite having been planted the previous October, the tree struggled and drooped. Gallon after gallon of water was poured around the base but to seemingly no avail. Frustrated and worried I was going to lose an expensive tree, I headed to the US Botanic Gardens in DC to query the horticulturalists.

By 9 am the city was already steamy. Hot and cranky, the lone horticulturalist eyed me warily. Keeping my distance, I asked her opinion about dogwoods. She rolled her eyes. What about heat stressed dogwoods? Any advice? Perhaps debating between blasting me with the hose or parting with a wee bit of wisdom, she shot me a "Go away!" look and hissed that if I mixed 1 cup of Epsom salt with 5 gallons of water and poured it around the base every three weeks, my tree would recover. Grateful for the advice and worried about her grip on the hose, I thanked her and left. As quickly as possible.

Did it work?? Oh yeah!!! I added some liquid kelp meal to the mix and my tree recovered beautifully. Last summer when I made another annual pilgrimage to the US Botanic Gardens, the horticulturalist I talked to was kind and helpful. Maybe it was because I didn't ask about dogwoods....

Every summer I try desperately to come up with new ways of saving water. Last summer I began saving my cooking water that had been used to steam vegetables, or cook pasta or potatoes. After it cooled, I used it to water my container plants and they thrived. Boing! That was easy!

If My Roses Could talk, They'd Bark

Despite having a garden focused on native plants, I love roses. My David Austin roses and beautiful climbers aren't native to Virginia, but I just don't care. They've been a part of almost every garden I've created and remind me of my parents who died in their 50's of cancer.

But when I started to dig the holes necessary to plant my beautiful new roses, my shovel barely scraped the surface before bouncing back into my hand, the clay scratched but not excavated. Stubborn and fiercely dermined to plant my roses, I just kept digging and soon discovered where all the thick clay soil had gone after our patio was installed. The landscaper had piled it in mounds and covered it with mulch.  Furious to the point of tears, I continued to dig. Two hours later I had one hole. Worried my roses were doomed to a quick death in the hideous soil, I vented to a co-worker. Had I ever given my roses dog food, she asked? Dog food? For roses? "I don't know what it does," she commented. "But I know a guy who swears by it."

I had nothing to lose and into the compost and bone meal went several cups of grain-based dog food and several handfuls of dried, pulverized banana peels. (I have since switched to a meat/veg based dog food but continue to buy small bags of grain-based kibble for my roses.) Did it work? Yes!!! Here's what I think happened: I noticed that fall that the areas I had enriched with dog food had more worms than the areas with just straight compost. While there probably wasn't much in the dog food that wasn't also in the clay, compost, and bonemeal, the dog food attracted worms whose casings enriched the soil. Because the dog food was buried so deep, my dogs never knew it was there and didn't dig it up. I still plant new roses with dog food. They'd wag their tails if they had them.

Tired of accidentally killing my drainage loving plants with our clay soil, I began using growers grit at the advice of my friend Sally at our local feed n' seed. At about $8 or so for a 50 lb bag, I mix it with the soil to improve aeration and drainage and fill the bottom of deep holes with it for my plants such as agastache and penstemon that die if they stay wet too long. It works wonders and has become a staple in my garden. 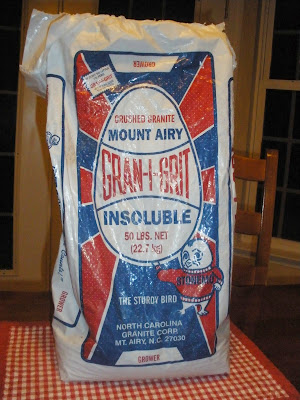 There's a bit of a glare in the picture, but the label says GRAN-I-GRIT. I think it's similar to chicken grit, but not having chickens, I'm not 100% sure.


This is what the growers grit looks like up close. My worm bins always create several gallons of liquid every summer. I add the liquid to my watering cans and rain barrels. It makes a fabulous liquid fertilizer that helps counteract heat and drought stress.

I make my own organic fertilizer that has been very effective in ammending my soil and nourishing the plants. I use the following ingredients in order of greatest amount to least amount:
* ground alfalfa meal  * cottonseed meal  * greensand  *bone/bloodmeal  *dried kelpmeal  *crushed eggshells.