"I have not failed. I've just found 10,000 ways that won't work."
Thomas Edison, American Inventor
If you've ever met a gardener who claims to have never killed a plant, they're either a liar or only grow silk flowers. I've lost track of all the plants I've killed, either accidentally or through utter ignorance. I once killed a huge patch of rudbeckia 'Goldsturm' by having the sheer audacity to enrich their soil with compost. They do not want compost. Ever! They want to be watered and ignored. I was guilty of loving them to death and they rewarded me by dying quickly, leaving a gaping hole near the phlox where their sunny yellow faces should have stood. 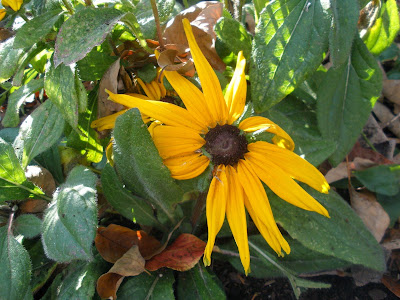 The foxgloves were magnificent for a season but didn't return, the pink windflowers disappeared, and the lithodora died. I survived the brief visit by the foxgloves, forgot about the anemones, but was irritated about the  lithodora. Were they too dry? Too moist? Their broken plant tag peeks from a brown paper apple bag, reminding me of our abrupt affair. I shove it to the side, determined to grow them again. I save plant tags like a horder saves junk. They are reminders of what I've planted, of gardens I no longer tend in states I no longer live.

Of all the plants I no longer grow, my favorite is penstemon whippleanus.  A tall penstemon with deep wine colored bell shaped blooms, it was said to grow well in moister, acidic soils across the eastern US. The pictures are alluring and the descriptive text seductive, but to be honest, I bought it because of its name. I just couldn't resist a plant with the name of P. Whippleanus. I imagined standing in polite society and commenting to the person next to me, "My whippleanus is simply enormous. If I'm not careful it will probably takeover. I can offer you a cutting, if you'd like." I can only imagine their reactions.

I dig through the bag, closing my fingers around an oddly shaped tag. Red Valerian Centranthus Ruber. I've lost track of how many times I've tried to grow this in Virginia. I love everything about this plant and was determined to make it happy. I flip the tag over and read: A short lived perennial that usually self- seeds (OK, I could live with that.) Fragrant, old-fashioned, excellent for cutting, good choice for hot, dry sites, attracts butterflies, full sun in average to poor soil, zones 4-9. It seemed perfect. I would ammend the soil to help it drain faster and then spend the summer watching it grow until its glory was eclipsed only by the sun and moon.

The valerian died. I planted it again, researched its needs, scratched my head to inspire a solution to a perennial problem, and watched it die again. I am patient by nature, until suddenly I'm not, and the lava of frustration was begining to flow. On a summer trip to California to see a family friend, red valerian grew everywhere. It spilled from behind fences and tumbled onto sidewalks. It mingled with the poppies and phlox and flirted with the cactus. I stopped in my tracks and stared.

"What are you looking at?" Bea asked.

"Valerian!" I shouted. "It's everywhere! All I do is kill this at home!"

She looked around dismissively and shrugged. "It loves our dry climate. Isn't VA too humid?" I looked back at the valerian. Hasta la vista, baby. Next!!
Posted by Casa Mariposa