The area where I live has three types of summer rainfall: all, nothing, or pratically nothing. For the entire month of June, it was hot, sunny, and dry, dry, dry. I found myself obsessively checking weather.com and scanning the skies for storm clouds. I wanted rain like a toddler wants a toy and I wanted it NOW! Frustrated but undaunted, I unrolled the garden hose and didn't bother putting it back. There was no need. It would be running almost every day until the skies opened up and it rained. Daily, I moved the hose from bed to bed, lifting it briefly to fill my watering can, before plopping it back onto the mulch, the flowers gulping the water as quickly as it flowed. I was hot, irritated and dreading the water bill.

During our summer droughts the water bill is best opened with a stiff drink in one hand and a match in the other. Our only saving grace was our five rain barrels, which by mid-June were empty.

My very supportive husband gave me a rain barrel for Christmas and I was thrilled but stunned. Rain barrels require a bit of installation, which he doesn't enjoy. Long work hours combined with a miserable commute don't leave him hankering for a hammer on the weekends, but install the barrel he did. I am a practical gal and was so excited I bought myself four more for my birthday. The barrels were indispensible in helping keep down an already huge water bill for June. Several storms have kept them full for the past six weeks and we've barely had to use any supplemental city water. They also serve to reduce the amount of water flowing into the storm drain and out to the fragile Chesapeake Bay. 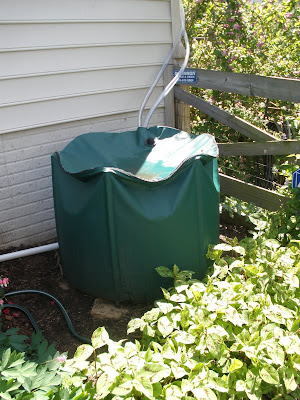 This is our biggest barrel, the Big Daddy. That's not it's official name, but it should be!! It holds 156 gallons of water and is fully collapsable. It was also the most affordable at $120. One of the things I really love about this barrel is that I can unzip the top and fill up my watering can without having to deal with the hose. The 10 ft hose didn't come with the can and was purchased at Amazon.com. I think it was called an extension hose. 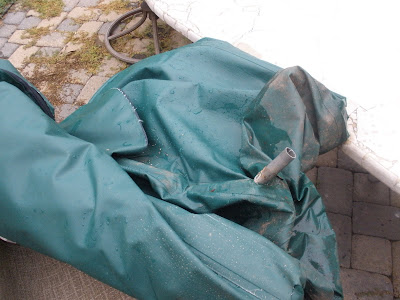 Okay, here's the picture I took today of the Big Daddy. During our last big storm, one of the plastic legs cracked and bent, sending 156 gallons of water into the grass instead of my garden. Frustrated, was I? Oh yeah!!! 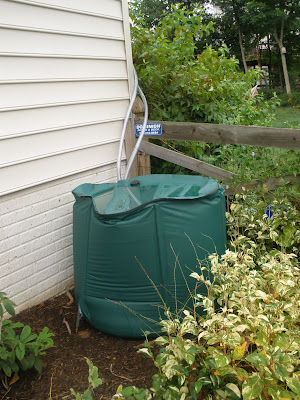 Here's a picture of the new Big Daddy rain barrel that I took today. We had a massive thunderstorm rip through the area last night and filled this to the top. There is a little black gadget on the top that is supposed to funnel the water into the barrel, but because the barrel is poorly designed, we opted to hook  two long tubes to the down spout and channel the water in that way. It's effective and fills the barrel really quickly. This barrel is pretty obvious but it's on the side of my house and I'm more interested in keeping my garden watered than making the HOA happy. 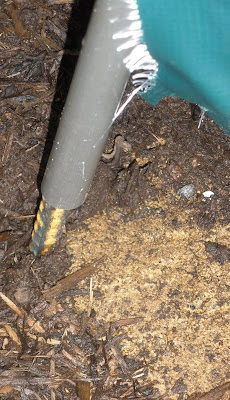 To solve the problem with bent rain barrel legs, we hammered pieces of rebar into the soil and then placed the cheap plastic legs over them.  We were trying to get it done before the storm and didn't have time to measure everything. Because the fabric has already started to rip, we'll be fixing the problem this weekend. 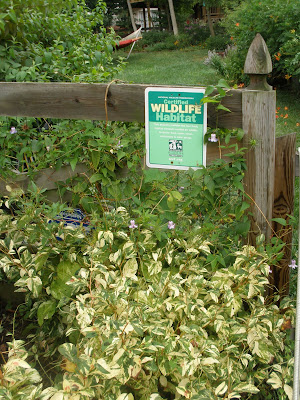 The plants around the barrel are called Painters Palette (Persicaria virginiana). They were given to me by a friend and thrive on total neglect in moderately dry soil in bright shade. They are still a bit smashed from where the first barrel collapsed. The clematis on the fence is a native clematis, clematis crispa, that I bought from Brushwood Nursery. Cick on the link for a beautiful picture of the inside of this tiny flower. 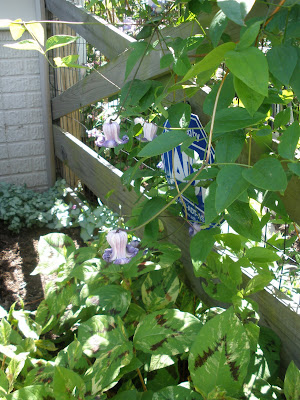 We have four other rain barrels that hold 50 gallons each. Three of the barrels are beige and blend into our house. They are mildew resistant and made from recycled plastic. 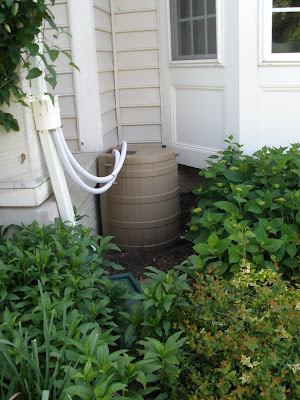 Here is one of the rain barrels in our front yard. This picture was taken in late spring. Here's a picture I took today. Today was drizzly and overcast. 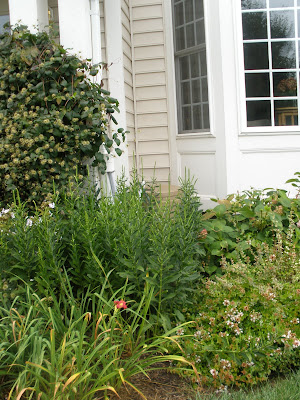 You can barely see it behind the obedient plant (Physostegia virginiana). I often use the water in this barrel to water the hydrangeas to the right, which are always thirsty. 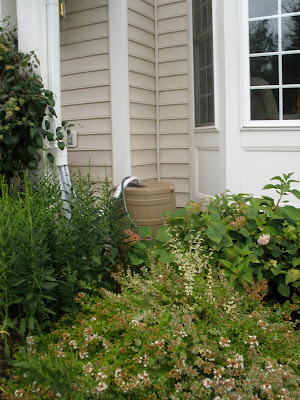 Here's a side view. The shrubs in front of the hydrangea are dwarf variegated glossy abelia. The one in the picture is more green than variegated while the two next to it are pink, cream, and green. They are tough as nails and require almost no care at all. 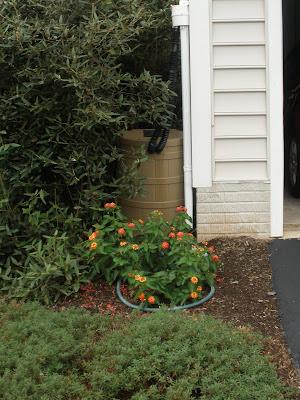 Here's another of the beige rain barrels that are in the front of the house and visible from the street. This one came with black tubing. The Prague viburnum and bright lantana disguise the barrel so it's not as obvious. 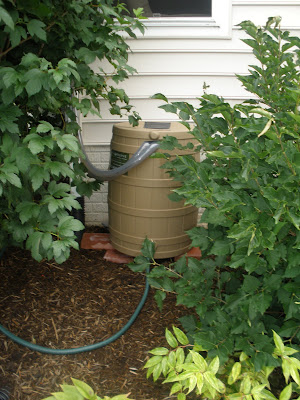 This barrel is tucked in between a huge American Cranberry bush (Viburnum triloba) and a pair of  'Miss Kim' lilacs. You can barely see it. 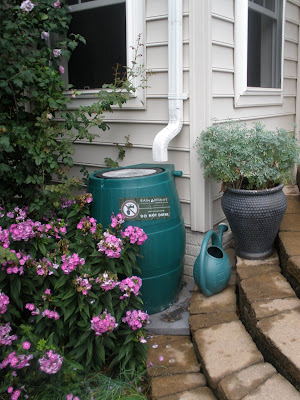 This rain barrel is the easiest one to use since the top lifts right off. When it's full, I add a 16 oz bottle of kelp meal and a little bottle of Super Thrive to the water. As it ferments, it smells weird, but it gives the plants an extra boost. You can also throw in a shovel full of compost and let it brew for a few days. You'll end up with an awesome compost tea that your garden will love. 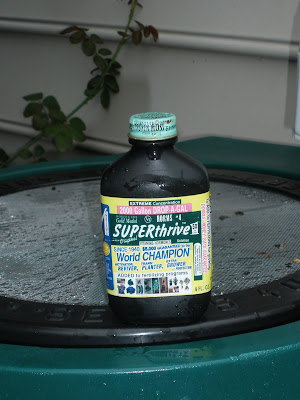