We sit in a group, jumping into a conversation with no clear beginning or end. Ideas and commentary are tossed in, stirred, discussed and I see B grin before lobbing a groaner straight at me. I could see the pun coming, his face like a road map, easy to read but the destination always a surprise. C and I laugh, full throated howls while he cooks up another.

Polished and polite enough to take tea with a queen, when the doors are closed C cusses like a sailor and tells stories bawdy enough to make Mae West proud. I love her like a sister. When stress and pressure builds, jokes slick with innuendo are passed between us, choice words whispered loud enough to make the eaves-dropping men laugh and blush. There will be payback and when we least expect it, a prank will be played to exact revenge. We plot with wives to surprise them with Christmas gag gifts and the circle continues. 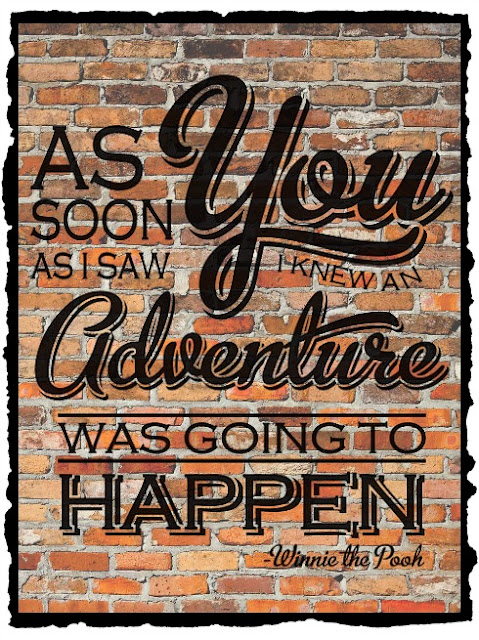 These aren't casual acquaintances but friendships with memories spanning nearly a decade. We're a diverse group: men and women, liberal and conservative, married and single. We talk about everything but gardening for none of them are gardeners. These are a few of my "I'll always be there" people and the ties run deep. I do not chose my friends based on their gender, race, or religion. It is a spark, a connection, a feeling of ease and comfort frosted with the knowledge that when they reach out, I'll always reach back.

We are different, B and I. He's quiet and careful, a sports fan who loves his lawn. We've started to lose track of how long we've known each other and mark dates by the age of our children. Long running jokes punctuate conversations and I pretend to ignore him when he pulls out his wallet to bet me $20 my daughter will run off and get married. "I hope your wife has triplets", I reply. His shoulders shake as he laughs. 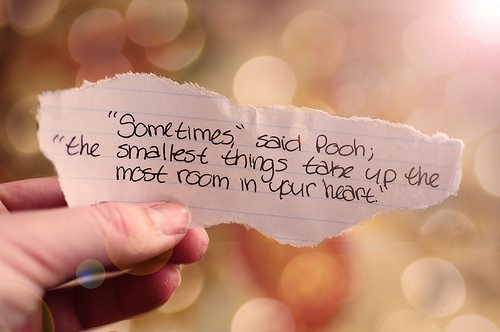 The swoosh of an incoming text breaks the silence as a picture of B with his son fills the screen. "Just saying hi!" They grin over a menu as they wait for their order, the rest of his family on the other side of the table. I struggled to control the emotional rip tide of my son's deployment to the middle east and he and C watched me slowly succumb, unmoored from my hope that he wouldn't leave. The deployment was repeatedly canceled only to be reassigned, a different date and mission appearing almost daily across my phone screen for weeks as my son passed along the news. A strong hug and gentle advice helped hold back the tears and when I couldn't stop the flow, he waited patiently, handing me tissues til I could speak with ease. We're open and honest and little goes unsaid. I send a smiley face back and tap open the next text.

"Get out of your head. Stop thinking so much! Go dig a hole." I can see C's face as I think of a response. "Easier said than done." I type. "I wish my brain had an off switch." "It's called wine" she shoots back and I start to smile.

C is loyal and fierce and knows me well. I toss the phone onto the patio table and head into the garden. My thoughts spin and loop until I tell myself to stop. Memories of previous deployments bubble to the surface and the tears start again. Multiple tours in Viet Nam, Iraq, Kuwait, and Afghanistan pepper family history and my stomach tightens. I take a deep breath, my forehead on my knees, grass soft against my feet. I know too much of war, of bodies never recovered and the silent specter of PTSD. Fear is not a wide mouthed monster but a gnawing beast that devours you in small bites until you're raw and exposed. My child is no longer a child but a solider and I am powerless to protect him. 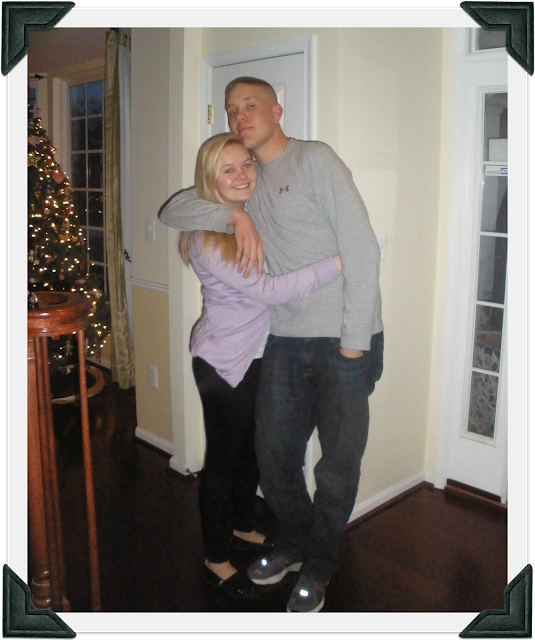 My phone rings, an irritating quack, and my head jerks up. I don't want to talk to anyone, to explain myself. I just want to be alone. M's name fills the top of the screen and I tap open the call.

"Hey, how's it going?" My voice cracks as I answer and I don't bother to hide the emotion. "I'm calling to check on you", she says quietly.

I'm sweating in the August heat and absently swipe at insects that inch along my arm. Hidden by mounds of perennials, it is not my garden that offers solace but the people who fill it. I sink into a patio chair and let my apprehension gush, flowing through the phone to pool at my feet. She doesn't tell me not to worry, that it's his job, he's an adult. She just listens, her voice calm on the other end. His plane is airborne and his final stop is a safe, well secured base. Hopefully, he'll be there for a while, I tell her, before heading north. I take a deep breath and relax for the first time in weeks. 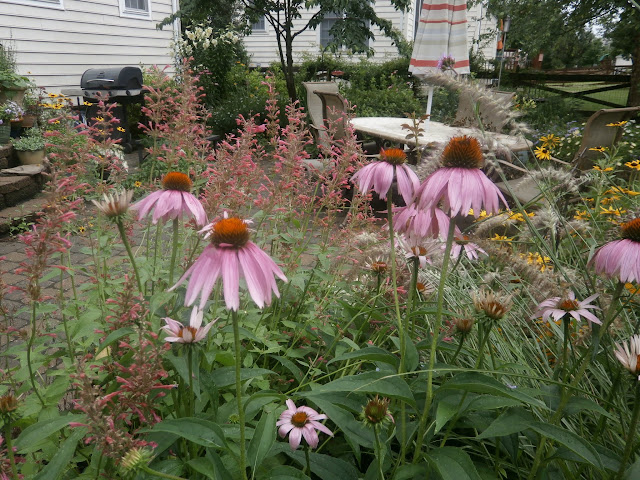 Actions speak a truth words never will, small measures of honesty that reveal the transparency of a human heart. The measure of friendship doesn't lie in grand gestures but in the mundane, steady hum of a vibrating phone and knocks at my door. It comes as a steady pulse against clenched hands that reminds me I am stronger than what I fear. It is my true garden, a refuge more beautiful than anything I've ever planted. 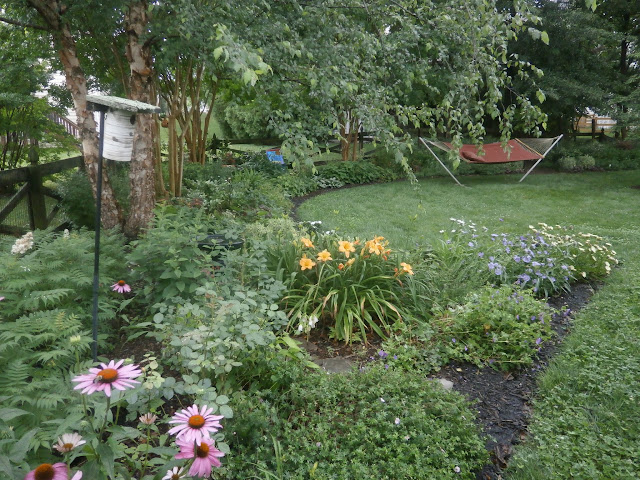 Part of the shade garden after a rain storm.