This is the first in a series of posts I'll publish randomly throughout the rest of spring and into summer. They'll detail the garden makeover I began last fall and completed this spring. Each new post will begin with the phrase Fixing the Big Uglies and show before and after pictures.
When I was younger I was one of those irritating and always slightly grimy kids who wanted to know why everything happened the way it did. As I grew older I was able to find my own answers about the physical and natural world and changed my fascination to why people acted the way they did. As curious as I was about the motivators of the people around me, it was my own tendency to stick the wrong plant in the wrong spot that was the most intriguing. Despite my best efforts, I had become a master of misplacement and was forever moving plants from place to place, with the hopes that I would finally get it right. I underestimated the growth potential of trees planted in holes full of compost and the ability of water loving plants to render a wet spot a virtual desert to other plants also competing for moisture. While I may have been interested in the behavior of others, I couldn't even figure out my own.
Several years ago when my massive river birch was but a strappy sapling, I created a bed around it and filled it with hosta and Siberian iris. Were these shade loving iris or sun loving hosta? Nope. I justified the planting location on the rationale that the hosta were planted on the side of the tree that was also shaded by an equally smallish crepe myrtle and therefore would receive more shade while the iris were planted on the side that opened to grass and sunny skies. Did it occur to me that my river birch had branches on both sides of its trunk that would grow long and lanky like a hungry teen in its moist, fertile spot, creating a swath of shade large enough to pitch a small tent under? Nope. As a matter of fact, I felt a bit smug in the juxtaposition of the garden layout and was sure lines of gardeners would form at my gate to see the sun loving iris growing so happily next to shade loving hosta.
The line forms here: 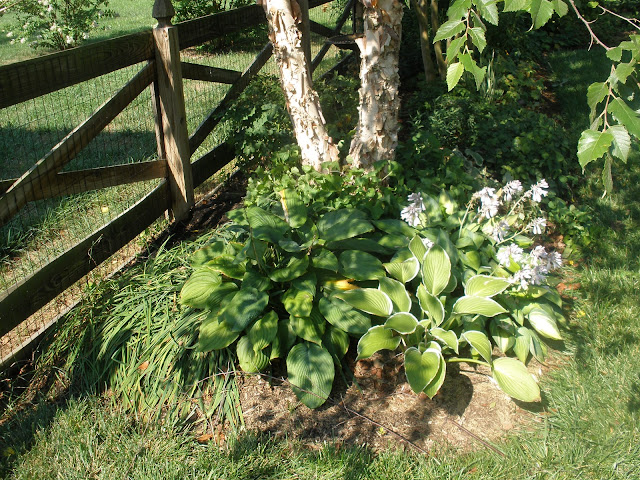 Aahh! Such beauty! Cramped, anemic hostas in a tiny bed and a sea of iris collapsus,
the newest shade hating cultivar.
Refund, please! 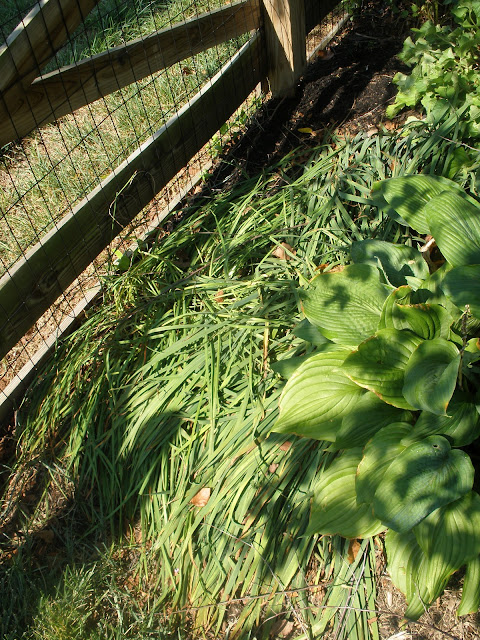 Thanks to the water sucking super power of my 'Heritage' river birch,
this once wet area now rivals the Sahara for sheer dryness.
Fast forward to fall 2010 - The iris have been dug up and the hole filled with compost. In a moment of brilliance, it has finally occurred to me to plant the sun and moisture loving iris in the moist, sunny bed across from the river birch. Extra iris are given to a friend and I wait out winter wondering if the transplants will survive.
Summer 2011 - The iris poke from the ground like green spaghetti, limp against the sweetspire, shocked at the sun and confused by the moist soil. They grow, weak and flaccid, but do not bloom and I spend the summer avoiding them, choosing to remember the one blossom filled spring before the birch began to race toward the skies, its branches filling the garden with speckled shade.
Fall 2011 - Perhaps it was the cooler air or time needed to settle their roots, but by fall the iris were erect and tall, sabers of green next to the rotund abundance of the sweetspire. They hadn't collapsed and died but were thriving. If I could make them happy, perhaps I could finally see my garden as it was instead of as I imagined it to be and create the changes that were overdue. Out came the shovel, away went the grass, and a new river birch garden was created.
Spring 2012 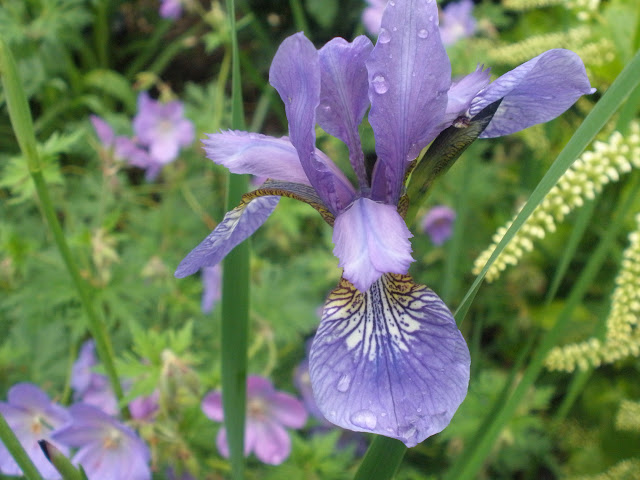 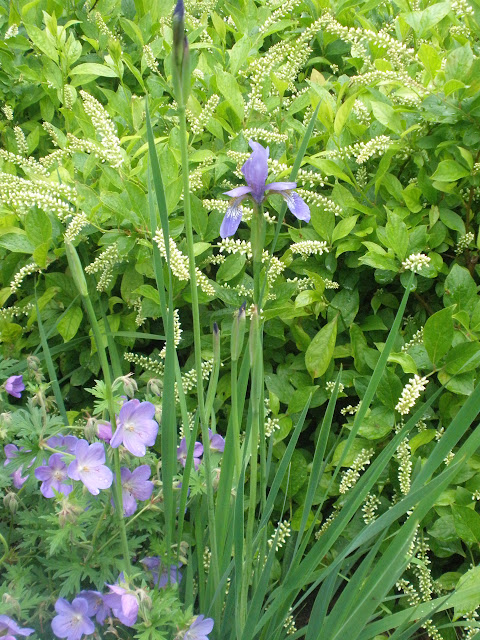 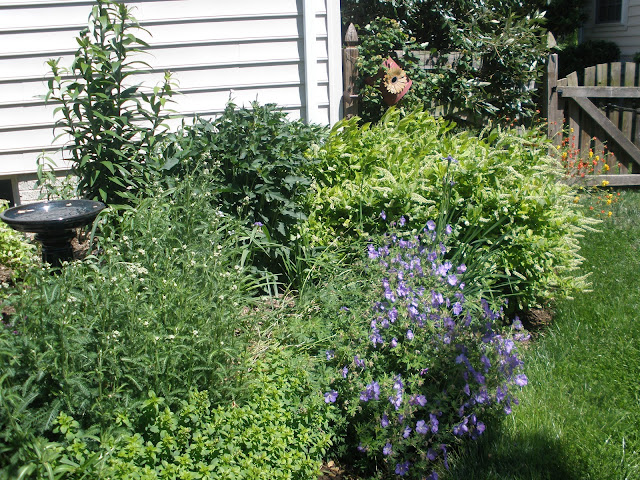 It was windy when I took this picture but after a week of overcast skies, I went ahead and took a few pictures while the sun was out. This bed, known as the dogwood garden, is across a grass path from the river birch garden. White trumpet lilies, heliopsis, sweetspire, Siberian iris, 'Johnson's Blue' cranesbill geraniums, 'Rotkugel' oregano (in front of the wind blown yarrow), and many other perennials fill this moist, sunny bed. 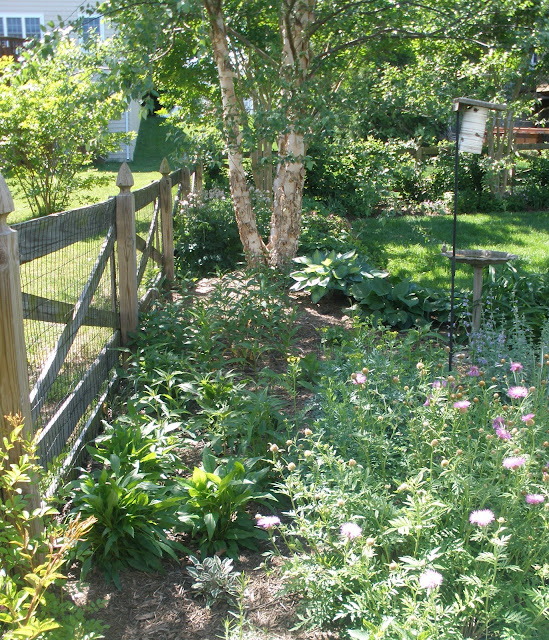 Part of this bed receives high filtered sun, while the edge of the bed (not shown in this photo) receives full sun. Phlox, rudbeckia, daylilies, blue mist flower, hosta, balloon flowers, catmint, Persian cornflowers, and variegated iris and sage pilfered from around the garden last fall, are just a few of the perennials that fill this bed. 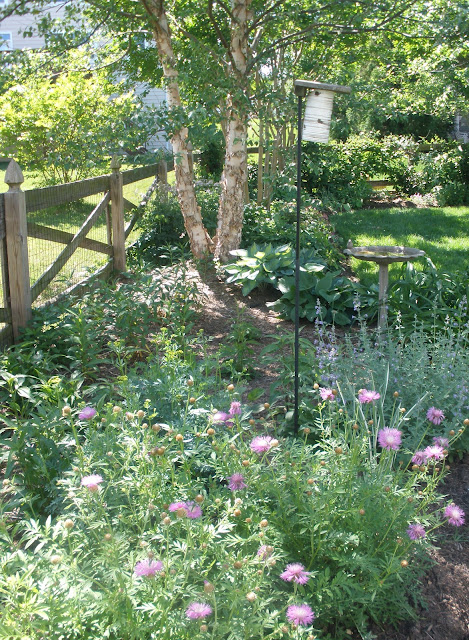 I have a family of blue birds nesting in this house. They rarely approach the bird house if I'm on this side of the garden but I'm hoping the babies aren't as shy as the parents. 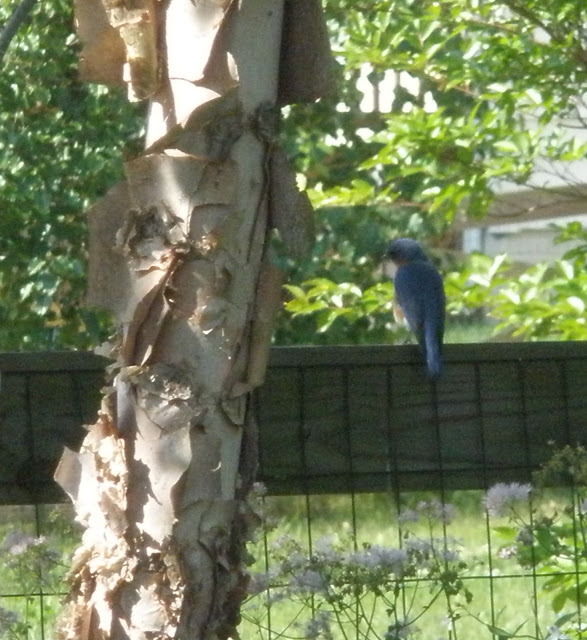 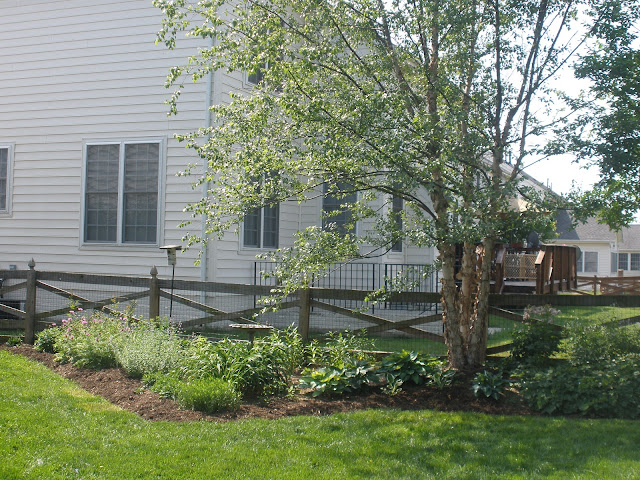 The river birch is over 30 feet tall. Our yard's natural flood plain begins just outside its drip line. By expanding the garden over this plain, I was able to create a moist, sunny  bed that receives filtered afternoon shade. The area to the right of the birch is filled with plants that can survive dry shade such as epimedium, Bowman's Root, and euphorbia. Two small Peggy Martin climbing roses are beginning to clamber up the fence in the sunniest part of the garden near the gate. 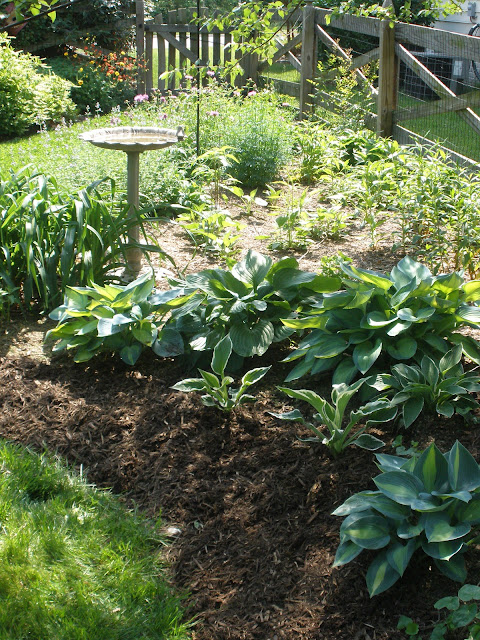 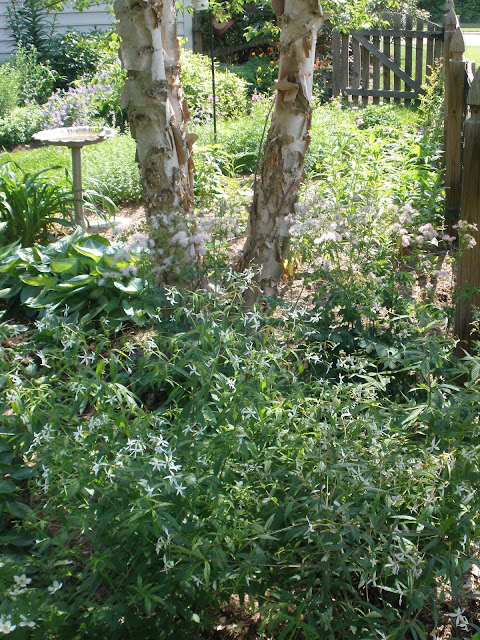 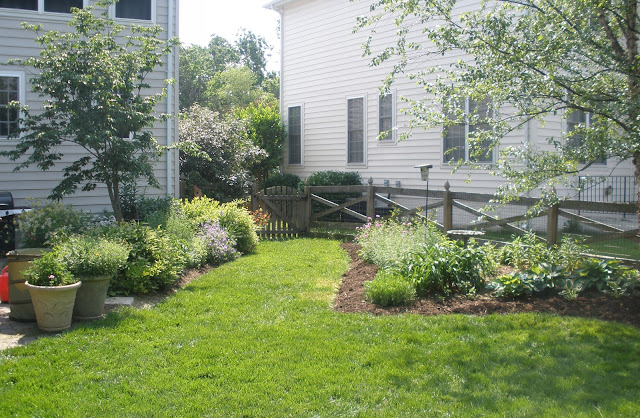