I was invited by Missy from Missys Garden to play a game that told my fellow gardeners 10 things about me. Ok! Sounds like fun...:0)!

1.  I live in the Virginia suburbs outside of Washington DC. It is the land of long commutes, horrific traffic, and unpredictable weather. But I'm close to DC, which I love, and also close to the gorgeous rural countryside of Virginia, which I also love. ( I didn't take the picture below, unfortunately!)

2.  I am a volunteer for the no-kill animal shelter Friends of Homeless Animals, which is why I have five dogs!! Two of my dogs are foster dogs. I love to work with dogs that are shy/have issues and need the help of a patient human/canine pack. My three shelter rescues do as much, if not more, canine rehabilitation than I do. I would be less successful if I didn't have three easy going, goofballs that welcomed every new pup into the pack. Check out The Dogs of Casa Mariposa to see the crew. 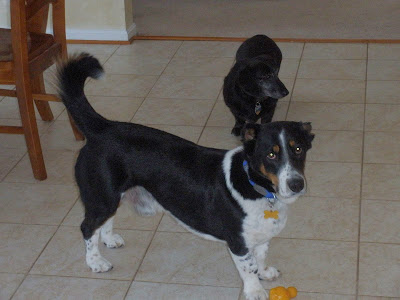 Rigby was one of my former foster dogs. His previous owner had cut his ears off and later dumped him at a high kill shelter. FOHA rescued him off death row before he was euthanized. Needless to say, he had major fear aggression issues and didn't trust humans. He stayed at FOHA for six months while I worked with him every weekend. Adopters avoided him because he barked so much and hid in the back of his run. But I knew this sweet boy had potential so I took him in as a foster dog. He stayed with us for 2 1/2 months and in that time, he became confident, very silly, and learned to trust humans and accept canine leadership, as long as it was female. He was adopted three weeks after he returned to the shelter and is now living the good life!!! PLEASE adopt shelter dogs!!


3. I enjoy cooking, especially if I have the time and energy to spend creating a wonderful meal, but I truly LOVE baking, and make great cookies! Baking is pure chemistry - it's all about the quality and combination of ingredients. It's a relief to take take my frustrations out on the contents of my mixing bowl and create something beautiful in return.

4. I love to make jewlery and am hoping one day to have crazy mad skills at wire wrapping! I love beads that are made from natural stones. Being a CA native, I'm currently working on a necklace that I want to evoke the colors of the Pacific ocean.

5.  I love the rain, crazy storms, and the sound of the wind howling as it comes rushing in from the Dakota prairies. Have you ever been to the Dakotas? Go! It's beautiful! It's life in the vast lane.

6. I love being a teacher and have no patience for teachers that are mean, lazy, incompetent, or indifferent. My favorite subjects to teach are English/writing and science.

7. I would love to be independently wealthy so I could travel more. I have a great love and appreciation for other languages and cultures. Egocentric, close minded people frustrate me! My way is simply my way - it's not the only way!!

8.  I love to read, especially books that force me to look at a situation from a different perspective. I recently finished The Art of Racing in the Rain by Garth Stein and Little Bee by Chris Cleave. Both were wonderful! One of my favorite books is Join Me by Danny Wallace. It's laugh till you cry funny. :0)

9.  I have a bubbly, goofy personality but am very calm around animals. I love fashion, especially clothes that are a bit retro or artistic. I have no desire to look like everyone else.

10. When I was in high school, early college years, I had no desire to be a teacher and used to kill every plant I came near. When my son was born I asked people NOT to give me plants because I knew they would face a slow, dry death in my care. When my son was about 2, I was in the plain, ugly yard of my Air Force base house lamenting to myself the utter drabness of my surroundings. I looked at my yard and then at my son and thought, "Hey, I kept him alive for 2 years. I could probably keep a plant alive." Thus, my gardening adventures began. I created a garden at several base houses and at each house we purchased later. Having moved 17 times in 34 years, it was my way of saying, "Yes! I was here! And this small patch of Earth is the better for it!"

I originally wanted to be a foreign correspondent, so that I could make a career of writing and traveling. Marriage, kids, teaching, suburbs were NOT in the plan! Fast forward to age 41 - I've been married almost 21 years and have a 15 yr old and an 18 yr old. Life's just like that sometimes but I'm very glad I made the choices I have. There's only one road to NOW and I'm happy I'm on it!!!

11. I decided to add one more fact!! I LOVE live music!! In the past year I've been to concerts by No Doubt, U2, Muse, Pink, and Sheryl Crow. I would really love see Allison Kraus perform!

(I will try to add more pix to this post later. Blogger is telling me to get my pix off Picasa instead of the My Pictures file on my computer which is slowing me down to a glacial speed. UGH!!)
Posted by Casa Mariposa