In celebration of summer tomatoes and naughty children going back to school to torture their teachers (me!), I've decided to repost one of my favorites from February.

When I was a kid my neighbors had a huge vegetable patch that ran the length their backyard. Aside from tomatoes, I'm not sure what they grew. My brother and I would peek through the fence slats as the woman watered and weeded. Her tomato plants climbed six foot support frames, heavy fruit hanging from their branches like giant rubies. But we didn't like our neighbors and, therefore, didn't like their tomatoes. 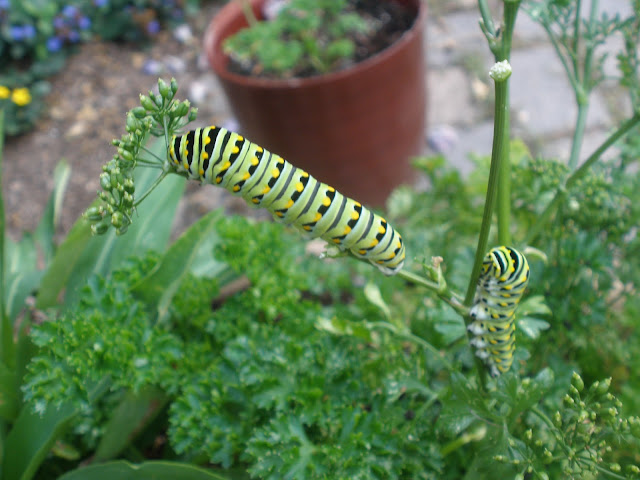 Constantly deployed or on lengthy remote assignments, our father was rarely           home, leaving our exhausted mom, who worked part time while going to school full time, to care for us alone. We should have understood or at least have been on our best behavior, but we weren't. Bored, creative, and unsupervised to the point of becoming slightly feral, we took to fending for ourselves. In an attempt to reign in our free time, we were given chores and my brother was asked to babysit me. He was 10 and I was five or six. Despite being ensconced in the relative safety of a military base, asking my brother to supervise me was like giving an arsonist keys to a match factory. We began to create our own fun by inventing games like Knife Fight, Food Fight (green bean aren't as worthy a projectile as wads of peanut butter), and Road Flare. Road Flare resulted in a couch fire while Knife Fight gave my brother a permanent scar. But our favorite game was Flaming Tomato Bombs.

When we tired of chasing each other with sharp objects or swinging from shower curtain rods, we blew things up. Our favorite target was our neighbors tomato patch. Layers of Kleenex would be wrapped around a cotton ball, tied with string, and soaked in my mom's cheap perfume. We'd run into the backyard, set them on fire, and launch them over the fence. The massive explosions we dreamed about never happened, but the nauseating odor of scorched tomatoes and perfume would fill the air. The woman would burst from her house while we ran for ours. Once inside, we laughed til we nearly peed our pants, and made plans to do it again. 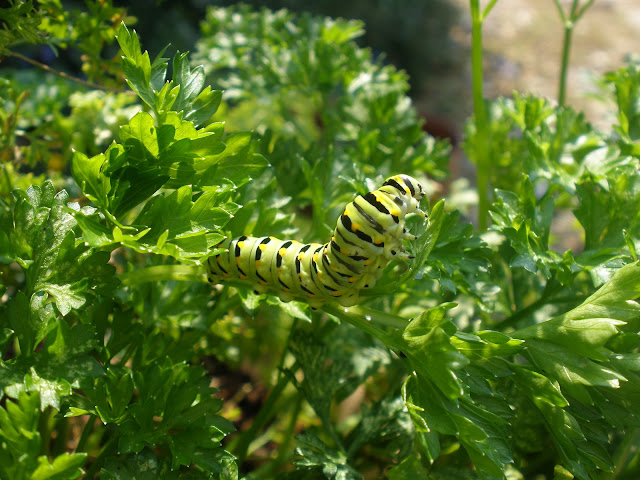 A few phone calls later, our dad came home, our mom changed her schedule, and the party was over. Our dad was assigned to a new base and much to our neighbors relief, we quickly moved. I wonder sometimes how much good I have to create in my garden to erase the torture we inflicted on our neighbors. If I met them now, I'd apologize.

I'm sowing curly parsley seeds this weekend to help nourish the swallowtail butterfly caterpillars that are born in my garden. They always germinate but I wonder sometimes if they didn't if a Flaming Tomato Bomb would be to blame. 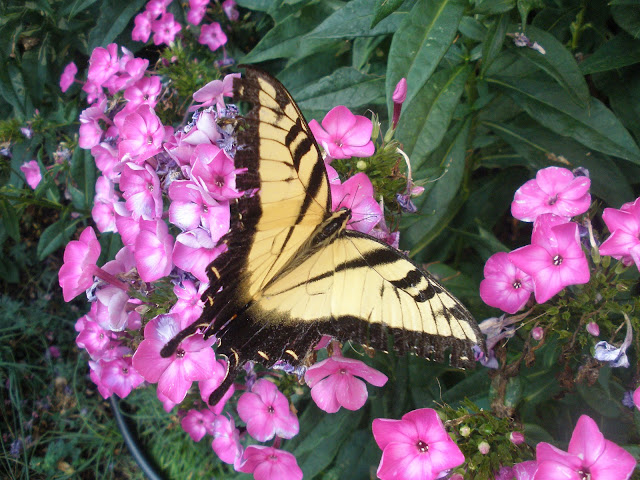 Swalllowtail butterfly on the 'Laura' phlox
Posted by Casa Mariposa